2013 in review: a year of fracking, wacky weather and soaring CO2 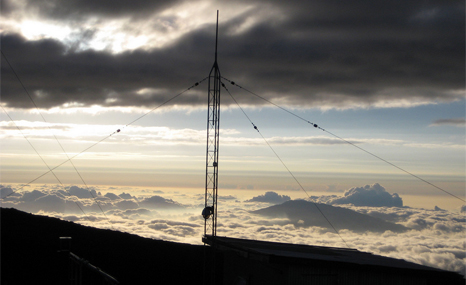 Dawn rising at the Mauna Loa observatory in Hawaii, where CO2 levels are recorded by US scientists (Pic: NOAA)

One number marks 2013 out as a unique year in human history.

On May 11 levels of carbon dioxide broke the 400 parts per million barrier. The last time it was that high was three to five million years ago.

It also offered signs of hope. China’s choking smog forced the government to scale back its investment in coal, while US President Barack Obama released a new climate action plan.

The world’s largest solar and wind farms opened, a plane powered by the sun flew across America, and leading development banks cut funding for fossil fuels.

January
Severe drought forced the US Army to dredge the Mississippi, amid fears it could dry up. NOAA revealed 2012 was the USA’s warmest year on record, but Chevron’s CEO John Watson said he wasn’t too bothered about climate change. As a heatwave scorched Australia, Greenpeace warned 14 major oil and gas projects could set off a ‘carbon bomb’. New US Secretary of State John Kerry promised the climate would be a ‘priority’ on his appointment, while the World Economic Forum was told $5 trillion was needed to ‘green investment’. 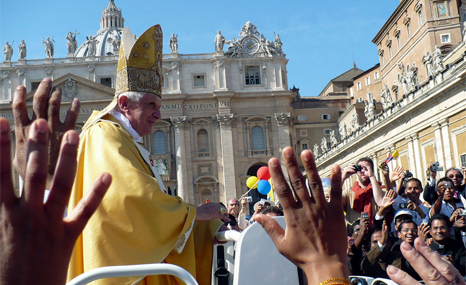 February
Pope Benedict decided he’d had enough of being number one, but we saluted him for being the ‘First Green Pope’. After a series of disasters and lost ships Shell suspended Arctic drilling, and the news got worse – HSBC said oil and gas firms could lose 60% of their value if countries took quick action to avoid global warming. Pakistan launched its national climate strategy, Saudi Arabia released a solar roadmap, China proposed a carbon tax. All necessary according to US Generals, who warned in February of an “imminent threat” from climate related conflict.

March
Ferrari and McLaren launched their new hybrid supercars at the Geneva motorshow, while Formula One revealed it had reduced its emissions by 9%. Masdar opened a 100MW solar thermal plant in Abu Dhabi, Obama presented a $2bn clean energy investment package, and South Africa promised a carbon tax by 2015. Venezuela President Hugo Chavez died; the country’s climate chief said a UN deal would ‘honour his memory’. Scientists reported Antarctica’s ice sheet was melting rapidly, not that this appeared to bother UK Prime Minister David Cameron. RTCC revealed he had blocked climate change from the G8 agenda. 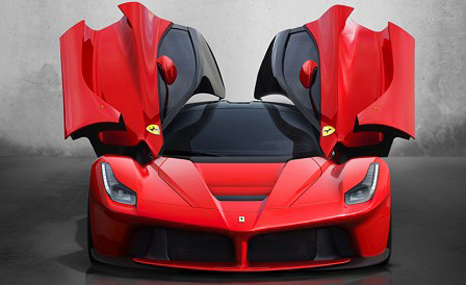 April
Former UK Prime Minister Margaret Thatcher died, and was praised by Ban Ki-moon for her commitment to climate change in the late 1980s. The world’s poorest countries said they were ready to make legally binding emission cuts, and Afghanistan became the latest state to join the Kyoto Protocol. A report from the UN warned 168 countries were at risk from land degradation, the UK opened the world’s largest offshore windfarm, and opposition leader Tony Abbott promised to scrap the country’s carbon tax. April also saw the launch of one of the most important reports of the year – by the Carbon Tracker Initiative. It warned fossil fuel investments of $674bn would blow the 2C warming target.

May
The EU’s beleaguered carbon market looked out for the count at the start of May, with supporters calling for urgent reform. Data from the WMO revealed the world was continuing to warm, despite claims of a ‘hiatus’ in global temperatures. On May 11 the Mauna Loa observatory in Hawaii recorded the concentration of CO2 in the atmosphere had broken 400 parts per million, a level not seen for 3-5 million years. Veteran campaigner Bill McKibben described it as a “grim landmark”. Melting ice forced Russia to evacuate its Arctic research station, China said it would cap emissions by 2016, and Prince Charles let rip at climate sceptics holding back green investments. 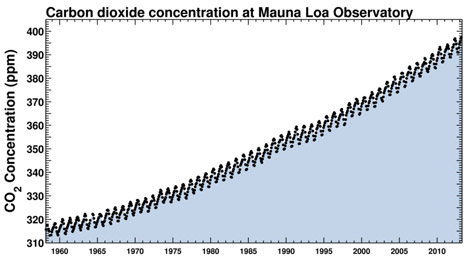 June
New York Mayor Mike Bloomberg made waves at the start of the month with a $20billion plan to make the city climate resilient, a vital step post Hurricane Sandy. Smoke from Indonesia’s burning rainforests turned Singapore’s skies black in a month where the IEA said the world would warm by 3.6C. UK climate experts met to discuss the ‘unusual weather’, concluding it was indeed unusual. High tides swamped the Marshall Islands capital Majuro, and experts warned China’s production of HFC gases was (another) climate ‘bomb’. The month ended on a high, with the release of President Obama’s National Climate Action Plan and a commitment from the World Bank to stop funding coal.

July
Fracking stole the headlines in the UK with a wave of protests against shale gas drilling across the country, notably in Balcombe. It was a month where plans for a giant solar power plant in North Africa were ditched, a senior Saudi Prince said oil markets were in decline, and Alberta’s tar sands sprung an unstoppable leak. BMW launched its electric i3 range to great acclaim, Coke announced a 25% carbon reduction target and RTCC investigated a new phenomenon – flying wind farms. Clean energy companies also gained a massive boost with China’s announcement of $294 billion investment up to 2020. 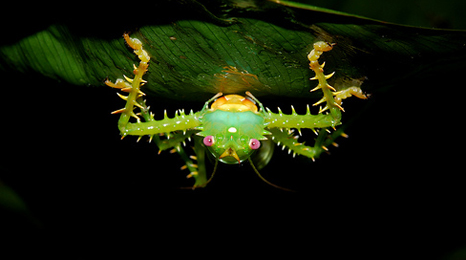 The Yasuni region in Ecuador is home to rare insects, including the Spiny Katydid (Pic: Geoff Gallis)

August
Fund managers worth $14 trillion kicked off August advising investors to take climate change into account when assessing the value of companies. In a sign of the levels of finance now at stake in the carbon markets, Interpol warned $176bn was at risk from fraudsters. Ecuador binned its project to protect the Yasuni national park, blaming foreign investors, while UK farmers reported an increase in extreme weather events affecting food production. Former IPCC chief Bob Watson told RTCC a forthcoming UN science report needed to deal with the ‘temperature slowdown’, while campaign group 350.org called for tropical storms to be named after prominent climate deniers.

September
The UN’s much awaited IPCC climate science study was published in September. Key messages included increased confidence of scientists that climate change is happening and being caused by people, sea levels are rising, the oceans are becoming more acidic, and that continued releases of CO2 will cause ‘sustained warming’. Australia’s new PM ignored these messages, embarking on cuts to climate departments and policies. But there was movement in the Pacific, where leaders of 13 island nations adopted the Majuro Declaration on Climate Change. Greenpeace efforts to stop oil and gas drilling in the Arctic were ended by Russia, which boarded their Arctic Sunrise ship and arrested the 30-strong crew at gunpoint.

October
Saudi efforts to weaken the IPCC climate science report were revealed by RTCC, although it seems they were consistently ignored. India’s solar capacity smashed the 2GW mark, VW proposed plans for 100% green energy cars, Walmart topped US solar rankings and Google announced its latest investment in a $103m solar plant. UN climate summit hosts Poland recorded an early #fail, publishing a series of blogs saying that a melting Arctic would mean “more pirates and terrorists”. Leaked government documents revealed Japan planned to reduce its climate targets, while comedian Russell Brand eviscerated politicians for their “indifferent attitude” to climate change.  And perhaps in a sign of times to come, a man from Kiribati arrived in New Zealand as a ‘climate change refugee’.

November
Published at the start of the month, the annual UNEP ‘emissions gap’ report said efforts to avoid 2C warming could be doomed to fail by 2020 unless greater efforts to cut greenhouse gas levels were made. UN climate talks in Warsaw kicked off under the cloud of Typhoon Haiyan, a tropical storm that devastated parts of the Philippines leaving thousands dead. The country’s lead negotiator Yeb Sano delivered an emotional speech to delegates, calling on them to deliver the emission cuts needed to stabilise the climate. Did the summit deliver? Climate change economics expert Lord Stern wasn’t impressed, and green groups walked out protesting at a lack of progress, but here are five reasons we feel it was a success.

December
Nelson Mandela’s death dominated the news in December; we looked at what his legacy to climate activists was. China released its new climate adaptation strategy, while the World Bank told India it could be a solar leader [if it sorted out a few issues]. The UN’s Green Climate Fund opened its doors for business [it’s still skint] with hopes it can be running by late 2014.

Ban Ki-moon warned world leaders he wants them to arrive at his New York climate meeting next September with solutions, while the UN’s REDD project resolved a long-running dispute with Panama forest tribes. And most importantly, with two big years ahead of the UN climate summit in Paris, RTCC learnt that Sauron’s fires are responsible for changing Middle Earth’s climate, along with deforestation caused by orcs and hobbits.