Reports that the UK’s lead G8 negotiator is blocking efforts to add climate change to the agenda have struck another blow to David Cameron’s ambition to lead the country’s ‘greenest government ever’.

RTCC understands that the UK Prime Minister’s Adviser for Europe and Global Issues Ivan Rogers has rejected moves from Germany and France to make the issue one of the meeting’s key talking points.

Officials from the two countries are said to be disappointed their suggestions were rebuffed.

Instead, Rogers is insisting that trade, transparency and tax form the core of discussions scheduled to take place at Lough Erne, in Northern Ireland between June 17-18.

There appears to be a view within Whitehall that a limited agenda has a better chance of success, and that focusing on the economy amidst an increasingly bleak financial landscape is a sensible ambition. 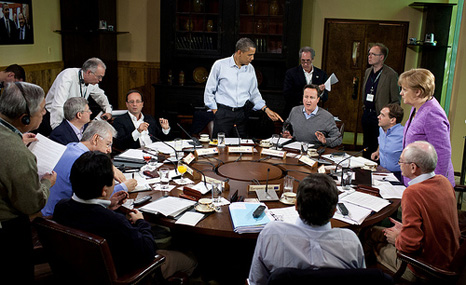 A government spokesperson did not deny the claims, but told RTCC the agenda would be finalised at an April meeting of Foreign Ministers in London, where the issue will be discussed along with events in Syria, North Korea and North West Africa.

“Climate change is an important issue and will continue to be down through the G8,” the spokesperson said.

“The UK government is currently in discussions with G8 partners on how best to follow up these important issues and we will issue further details in due course”.

The spokesperson said climate change is still one of the G8’s ‘legacy issues’, indicating that it could be discussed at some point during the meeting.

It is likely that combating world hunger will also be addressed, given the Prime Minister’s support of the IF Campaign recently launched by leading UK NGOs.

Blocking climate change from the main agenda appears an odd move given the profile it has had at previous meetings.

A significant proportion of last year’s Camp David G8 Declaration was devoted to outlining how the eight countries were committed to low carbon energy pathways, limiting the global temperature below 2ºC above pre-industrial levels and phasing out fossil fuel subsidies.

Significantly, it endorsed efforts to reduce “short-lived climate pollutants” such as black carbon (soot), methane, ground-level ozone, and hydrofluorocarbons. These are responsible for about half of global warming.

Given their status as ‘developed’ countries G8 members are also expected to play a major role in backing the nascent Green Climate Fund, which is scheduled to open for business in 2014 but currently has no adequate source of finance.

The 2005 Gleneagles summit – the last G8 held in the UK – agreed the Gleneagles Plan of Action on climate change, clean energy and sustainable development. Together with Brazil, China, India, Mexico and South Africa, the G8 agreed to continue discussions on the development of a low carbon economy within that forum.

“With two years to go before countries agree a new UN climate change agreement, this is more than ever the time for key nations to show leadership in the urgency of tackling climate change,” said Nick Molho, head of climate and energy policy at WWF-UK.

“After months of political infighting within the coalition government, the UK, which was the first country to develop its own Climate Change Act in 2008, is now showing dangerous signs of withdrawing from this agenda.

Molho  added: “David Cameron pledged to lead the greenest government ever, so it is astounding that his aides now appear to be actively blocking the inclusion of climate change on the agenda at a G8 summit that Mr Cameron is hosting.”

Will Straw, Associate Director of IPPR said: “The government’s refusal to use its G8 presidency to promote global action on climate change further undermines its claims to be the ‘greenest government ever’.

“If the world is to reach agreement in 2015 on binding carbon targets, as our leaders claim is their ambition, then rich countries must get their act together. An agenda for development focused on ‘trade, transparency and tax’ is to be supported but if we don’t tackle climate change, all other efforts will be in vain.”