It’s likely the departing Pope will be remembered for his deep conservatism, prayerfulness and inability or unwillingness to drag the Catholic Church into the 21st Century.

Others can deal with the church’s child abuse scandals and the effect its dated views on contraception have had on the spread of AIDS. These are issues that still need to be addressed.

What is without doubt is that Benedict was progressive when it comes to the environment, taking a stand against climate change, promoting renewable energy and calling for a closer communion between Catholics and nature.

Addressing Italian students in 2011, he called on them to become ‘guardians of nature’ and follow in the footsteps of St. Francis of Assisi, patron saint of ecology.

“Today more than ever, it has becomes clear that respect for the environment cannot forget the recognition of the value of the human person and its inviolability at every stage and in every condition of life,” he said. 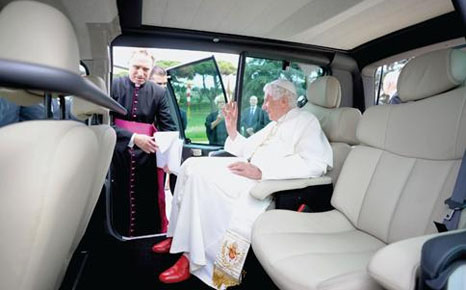 Ahead of the 2009 Copenhagen Climate Conference, Benedict called on world leaders to “promote a joint development based on human dignity and for the common good”.

After its well-documented failure he lamented the “self-centred and materialistic” attitudes prevalent in society, pointing to the global financial crisis as evidence humanity had lost its way.

During his tenure the Vatican revealed that by 2020, 20% of its electricity will be provided by renewable energy.

It installed photovoltaic cells in its main auditorium and joined a project to offset carbon dioxide emissions.

And last year the Pope was presented with a white Kangoo electric Maxi van by Renault, boasting a 44 kilowatt electric motor and lithium-ion battery and can travel 170km (105 miles) without recharging.

The carmaker also handed over a second car to the Vatican’s police force.

For the Pope and the church, climate change is part of a wider and more complex range of problems affecting society, as Martin Palmer, Secretary General of the Alliance of Religions and Conservation (ARC) explained to RTCC last year.

“We have to put all this in context…for the mainstream churches climate change is not the major issue…it is a manifestation of the major issues, which are sin, greed, arrogance, sloth and evil,” he said.

“What’s happening to the environment is part of a deeper problem.”

The Pope’s frail physical state and the size of the Vatican City belies huge influence around the world.

There are an estimated one billion Catholics on the planet, the majority living in the developing world, where climate change is likely to hit the hardest.

Francis Arinze, Nigerian Cardinal and Peter Turkson, the Ghanaian Cardinal, are both listed at best price odds of 4/1 and as short as 2/1 with some bookmakers.

But whether he is African, Latin American or another European – the environment is likely to figure highly in any new Pope’s inbox, and for that the departing Pontiff deserves some credit.