President Obama will seek to establish a $2bn clean energy fund using fees from the oil and gas sector generated during the next ten years, according to White House officials.

The plan will look to cut US dependence on petrol for vehicles and develop its domestic clean technology sector.

According to the New York Times, the Energy Security Trust will be funded from the growth in licence fees from oil and gas firms looking to drill on public land and waters. 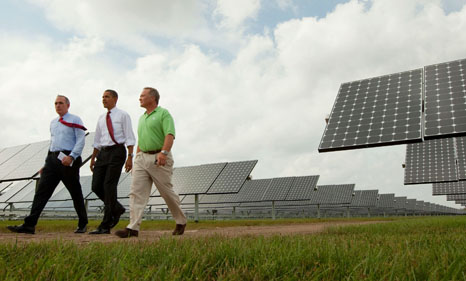 President Obama has talked a good game on climate change in recent months but this is the first solid policy announcement (Source: Flickr/White House)

The idea of using oil and gas revenues to fund research in fossil fuel alternatives was floated in his State of the Union address.

The Trust could represent the President’s first climate change policy conversion of rhetoric to reality since the election.

Promoting smaller cars, hybrids and electric vehicles, making fewer journeys and changing to biofuels could cut transport sector emissions by 80% by 2050, according to a US Department of Energy report released today.

The sector is responsible for a third of American’s greenhouse gas emissions, making transport’s potential contribution to US climate efforts just over 26%.

Obama has also approved 1.1GW of new renewable energy projects this week including the $100m McCoy solar farm in California that will power 200,000 homes.

The funding for the Energy Security Trust would not represent a new levy on the US energy sector.

President Obama, like his election rival Mitt Romney, promised to expand the area of public lands available for oil and gas drilling as well as opening up new offshore licences in the Gulf of Mexico and in the Arctic.

The additional revenue from these licences as US oil and gas exploration balloons, would be ring-fenced under Obama’s new proposal.

The International Energy Agency (IEA) has predicted that the US will overtake Russia as the world’s largest gas producer in 2015. Two years later it will surpass Saudi Arabia as the largest oil producer in the world.

There are currently two separate proposals tabled by various Democrat and independent Senators and members of Congress.

One proposes a $20 per ton of CO2 levy on coal mines and oil refineries The other focus on major emitters and energy users with a range of charges between $15 and $35 being discussed.