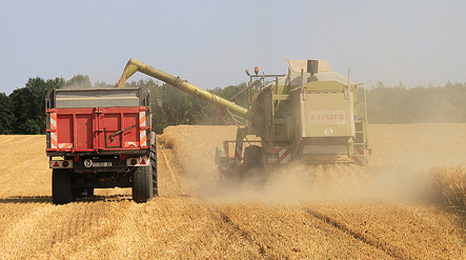 August is a month of harvest in the UK, when the fields hum with heavy machinery and the silos start to fill with grain.

It can also be a brutal reminder of the vagaries of the weather, which appears to be placing increasing strain on an already hard worked food production system.

David Lemon runs a 3000 acre farm near Marlborough in Wiltshire. He took over management from his father in 2003, growing wheat, oilseed rape, spring barley and spring wheat.

“Ever since we have had pretty wet, awful summers,” he says, “but the last five years have been really tough.

“The erratic rainfall is the straw that breaks the camel’s back, if it’s generally wetter – and then you get a massive dumping of rain – that breaks our system and means we can’t work the ground.”

Harvest started last Friday, an intensive process that means little sleep for farmers and their teams, picking their windows to head out and cut the crops.

But the increasingly extreme weather over the past 12 months has made that process all the harder, and one factor Lemon points to is erratic rainfall.

“Intensive rain shatters the pods – if you drive around the countryside you may see silver streaking across the fields – that’s shattered pods.” 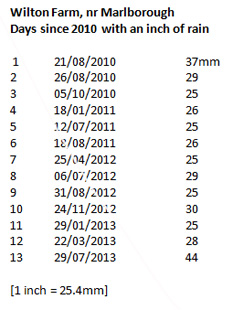 The records run on. In his father’s 50 year farming career he has only finished harvest in September on three occasions, and two of them have been in the last five years.

Lemon is far from alone. In an interview with the Guardian two weeks ago, Peter Kendall, president of the National Farmers’ Union, warned extreme weather driven by climate change is the biggest threat to the industry.

“A gentle increase in temperature is fine but extreme weather events completely stuffs farming: just look at last year. Farming is risky enough as it is,” Kendall said.

If many farmers are feeling sore, it’s because the UK’s 2012 wheat crop was devastated by the wettest Autumn since records began followed by the coldest spring in 50 years.

It left the UK having to import 2.5m tonnes of wheat to cope with the shortfall, and forced Weetabix  to halt production of ‘Minis’ and ‘Oatabix Bites’ due to a shortage of raw materials.

Longer term the situation is unclear. Gentle temperature increases linked to global warming could be good news for many farmers, but unpredictable seasons are not.

“You might think about rain and flooding over winter – and not so much in summer. Snow in March isn’t untypical, but having that much snow that late at a time lambing was happening was unexpected.

“You can deal with one bad year every now and again, but the risk is that climate change makes it more frequent so you can’t bounce back,” she adds.

Temperature fluctuations have left many crops growing cycles behind schedule, which the latest crop report from ADAS / HGCA confirms is the case across the UK.

Back in Wilton, Lemon says he’ll be cutting oilseed rape at the end of August, a month later than planned.

July’s heavy rainfall ahead of harvesting creates additional headaches for farmers: the need to dry their crops to ensure they don’t rot.

“The other thing is that we get this more in August – this is a lot wetter than it used to be. That’s not consistently heavy rainfall but a damper August, which means you have to use the driers to dry crops,” he says.

By Lemon’s rough calculations the oilseed harvest is rated poor to average this year, wheat predictions are mixed, while there is more positive news for barley.

Meanwhile farmers will plough on with the 2013 harvest and planting for 2014, knowing that the most influential aspect of their profession is also the one thing over which they have no control.