In a partnership with energy company Ecotricity, VW will be able to provide vehicles using energy from renewable sources 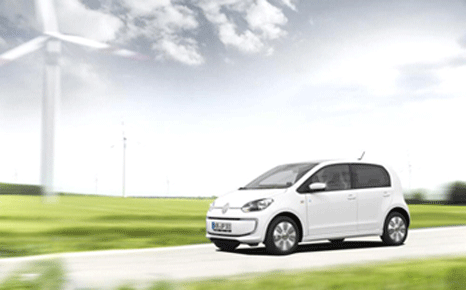 In the first crossover partnership of its kind in Britain between a car company and an energy company, Volkswagen says it will provide 100% green electricity to customers buying one of its electric vehicles.

People buying an electric vehicle from one of the Group’s brands will be offered the option to adopt energy company Ecotricity’s green energy package for their home which means their motoring can be powered by 100% renewable energy.

Ecotricity founder, Dale Vince, said in a statement: “Ideally an electric car should be charged using 100% renewable energy; otherwise you are still powering it from fossil fuels.

“Running a car on green electricity from the wind and the sun is the last piece of the jigsaw; it’s the ultimate in green motoring.

“When you plug your car into your house at the end of each day, you realise you’re running on green electricity and releasing no emissions while you drive, it’s an exciting new world.

Ecotricity is the world’s first green electricity company and now powers over 75,000 homes and businesses in the UK.

Ecotricity is also responsible for the UK’s first national motorway network of charge points for electric cars. However, the ‘electric highway’ does not yet support the battery on the Volkswagen e-Golf.

Earlier this year Ecotricity announced a partnership with Nissan to increase electric vehicle charge points across the UK and last month announced it was undercutting some tariffs from the country’s ‘big six’ energy companies.

Stuart Brennan, from Ecotricity told RTCC that by next year, with the help of Nissan, things will have changed greatly in the electric vehicle market.

“We’re putting in about 20 a month [charging points]. By next summer virtually 95% of motorway stations will have a fast charger throughout the UK.

“The charging points that we’re putting in with Nissan will be compatible with VWs as well and lots of other brands of cars as well.”

The announcement comes shortly after the Volkswagen Group’s chairman, Martin Winterkorn, announced on the eve of the Frankfurt Motor Show that the company had its sight set on market leadership in electric vehicles by 2018.

The first Volkswagen Group electric car to go on sale in the UK will be the Volkswagen e-up! city car, with orders being taken in November and the first deliveries in January 2014.