The tiny Pacific Marshall Islands are being inundated by record tides that have engulfed the capital Majuro leading the government to welcome a US emergency response team with the words “welcome to climate change”.

The combination of storm surges and high tides flooded the runway in Majuro earlier this week.

“From drought to deluge, my people are suffering an escalating climate crisis,” said Tony deBrum, Minister in assistance to the President of the Marshall Islands.

“Thousands of my people in the north are thirsty and hungry, thousands of us here in the south are now drenched in seawater. As I said to the US emergency team this morning, ‘Welcome to Climate Change’.

“We are very grateful for the help we have received. But aid will not stop floods, droughts and disease from becoming the new norm. As we have said for years, prevention is far better than cure. What we need is a new wave of climate leadership,” said deBrum. 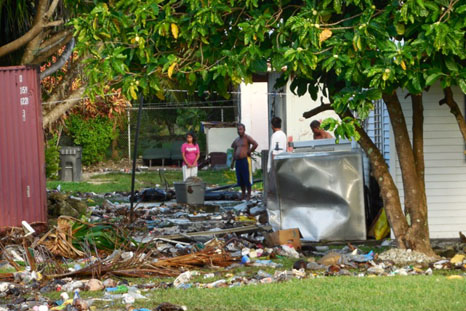 Seawater has strewn debris across the islands and could further increase the salinity of freshwater resources that are already in short supply (Source: Olai Uludong)

Many low lying islands are suffering heightened coastal erosion and are losing freshwater resources to encroaching seawater. These imminent threats have made them a small but vocal force in the climate change debate.

President Christopher Loeak’s home atoll of Ailinglaplap is one of the most vulnerable in the Marshall Islands.

“The end of the island gets shorter every year. Some places we used to stand on the beach to fish are now in the water,” Loeak told the AFP news agency.

“I have great attraction to Ailinglaplap. I can live on other islands, but I was born and raised there. I always think about going back there to live,” he said.

The seawater flooding is even crueller given that the islands are in the midst of a serious drought with almost 7,000 of its 55,000 inhabitants exposed.

While President Obama was speaking in Georgetown of the importance of “sheltering future generations against the ravages of climate change”, the Marshall Islands was finding that the dangers are in fact already present.

“We will not stop telling people that climate change is a real issue for humanity. We will be the first to feel it, but it will come to them and they should realise it,” President Loeak said.

The US declared the north of the Marshall Islands a disaster zone earlier in the month due to the severity of the drought.

The Alliance of Small Island States (AOSIS), which represents the group at the UN climate change negotiations, is calling for a loss and damage mechanism to compensate for the effects of climate change.

The current financial focus is on reducing emissions and adaptation projects to offset the impacts of climate change. Supporters of a loss and damage mechanism say it is a must for the most vulnerable nations experiencing impacts beyond their national capacity to absorb.