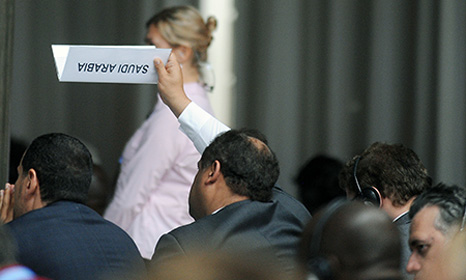 Saudi Arabia made significant efforts to weaken the conclusions of the recent IPCC climate science report, notes from the four-day meeting in Stockholm where the study was assessed reveal.

The Saudi delegation, led by Khalid Abuleif, branded a headline statement saying warming of the climate system since 1950 is unequivocal as “alarmist” and urged qualifying terms.

Representatives from the oil-rich country argued unsuccessfully against “giving policy makers the message that CO2 drives global warming”, and called for a reference to a 15-year warming hiatus.

And despite support from Russia, they also failed in a bid to delete “the entire text” relating to the IPCC’s RCP2.6 low emissions scenario, which sees aggressive emission cuts limiting temperature rise to 1C by 2100.

An outline of proceedings has been published by the respected environmental reporting organisation IISD, highlighting the main issues representatives from over 190 countries discussed during the IPCC AR5 Summary for Policymakers review, which was held in private.

In its final analysis the IISD writers observed that despite a constructive atmosphere “political disagreements did surface during these discussions with Saudi Arabia trying to mute the tone of the scientific findings by tirelessly stressing uncertainties throughout the meeting.”

For the first time in the IPCC’s history scientists set a limit on the amount of carbon dioxide that can be safely released – news that was never going to be accepted willingly by Saudi Arabia, which holds the second largest proven oil reserves in the world.

The country has long been accused of trying to slow efforts to achieve a global emissions reductions deal.  In a 2010 interview climate scientist Kevin Trenberth accused the Kingdom of trying to “weaken” IPCC reports in 1997, 2001 and 2007.

In 2011 WWF had to apologise after one of its campaigners threw Saudi Arabia’s conference nameplate into a toilet bowl, while earlier this year the country tried to block climate change from the UN’s 2015 poverty goals.

Without a detailed transcript it’s hard to say just how influential Saudi protests were. A former UN climate official who observed the first two IPCC reports closely expressed concern to RTCC over the level of influence political representatives could have on the process.

But in this case it appears that IPCC headlines detailing observed climatic changes since 1950 were pushed through irrespective of Saudi objections.

The first statement in the AR5 summary reads: “Warming of the climate system is unequivocal, and since the 1950s, many of the observed changes are unprecedented over decades to millennia.

“The atmosphere and ocean have warmed, the amounts of snow and ice have diminished, sea level has risen, and the concentrations of greenhouse gases have increased.”

And while the country enjoyed support from Kuwait, China and the USA at previous IPCC meetings, the IISD summary indicates this was less evident in Stockholm.

It says a Saudi attempt to block efforts to “explicitly note” increased evidence of anthropogenic influence since the last report in 2007 was overruled by the UK, Slovenia, Switzerland, Canada, Fiji, Saint Lucia and Germany.

Additional reports in the New York Times indicate Swiss scientist Reno Knutti was on the receiving end of a number of objections from the Saudis relating to the contentious issue of carbon budgets.

In an interview IPCC co-chair Thomas Stocker rejected the suggestion the report’s contents could have been fundamentally changed during the meeting, arguing that the “process did not start in Stockholm”.

He told RTCC the atmosphere was “very constructive” with most interventions “seeking clarification”.

“I don’t make statistics but I remember that many governments were extremely interested in various parts of the report, and I think it’s the right and the duty of the government to seek clarifications, to make interventions,” he added.

UK scientist Piers Forster, who took part in discussions, praised China on Twitter for “for playing with the straightest bat” and said Canada’s delegates were “amazingly helpful throughout”.

The IPCC’s latest report has been praised by scientists for its comprehensive take on all aspects of climate change, but some have questioned whether the process is too unwieldy and open to political influence.

In an interview with the Guardian last month Stocker expressed concern at the pressure the reports place on scientists: “We are talking about petabytes of data,” he said.

The IPCC’s governing body will discuss its future at a meeting in the Georgian town of Batumi next week, with a press conference scheduled for Friday 18.