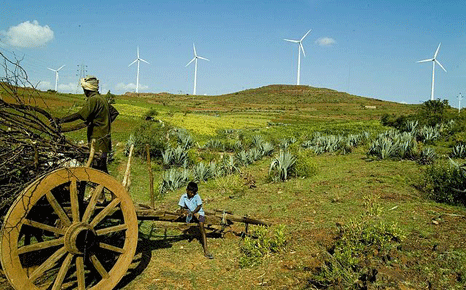 Solar power in India now accounts for over 2GW of the country’s electricity generation capacity, according to government figures.

Despite providing less than 1% of India’s energy supply, this is a key milestone given that plans to hit the government’s target of reaching 10GW had stalled with many projects facing delays.

“What this means to the industry as a whole is that…the sector…has matured quite quickly over the past few years and that there is enough information available that there are very few unknowns and that decision makers can make more informed decisions now than they could do earlier,” he said.

This 2GW milestone provides enough energy for around 278,000 homes, or more than the amount of people living in Uttar Pradesh, or the number of residents in Newark, New Jersey.

Since the end of August, total solar installed capacity stood at 2.1GW, out of which projects connected to the electricity grid stood at 1.97GW and those powering homes independently, not grid-connected were 0.13GW.

Lauren Cook, analyst at market research company IHS is in agreement with Manoharan, although she notes that the solar photovoltaic market is not without its difficulties.

“The market has slowed in recent months mostly due to delays in approving new projects which would have been installed this year, but installations have also been affected by the rupee depreciation and uncertainty around regional policies.

“Despite these issues IHS is predicting that after a slow 2014 installations will begin to pick up again following new project approvals under Phase 2 of [India’s solar policy].”

India is not without its innovative projects like an ultra-mega solar project in Rajasthan and a floating solar plant in Kolkata.

Coal remains India’s major fuel source contributing around 60% to its power mix according to India’s electricity authority, but many are confident that solar could replace coal within the next ten years.

Tobias Engelmeier, managing director at Bridge to India said in a recent blog that “Solar power is the only currently commercially available source of power that could both provide enough power from within the country to meet India’s rising demand and in addition offer distributed solutions that are less dependent on grid extension.”

He said solar plants can be built relatively fast whereas coal plants are contentious due to bureaucracy, social and environmental concerns and land acquisition. Solar is better placed, because 1% of land would be enough to power the entire country.

But it is not just solar that is pushing up its installed capacity figures. India’s entire renewable energy capacity has grown from 3.9GW in 2002-2003 to about 27.3GW in January 2013. 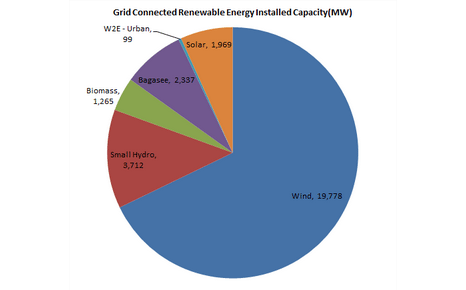 Wind energy has been the predominant contributor to this growth which makes up 67% of India’s energy mix, although is suffering a little at the moment.

Cook told RTCC: “The surge in wind installation in India in the past was, in a large part, supported by a generation-based incentive and accelerated depreciation.”

Wind-related incentive schemes were removed last April, although generation-based incentives have recently been reintroduced, but Cook said it would take some time for the market to feel the impact.

“In the meantime, many local turbine manufacturers and turnkey project developers are faced with debt burdens, and as a result, have been scaling back their operations.”