2012 warmest year on record for USA

2012 was the warmest year on record for most of the US, according to a new report by the National Oceanic and Atmospheric Administration (NOAA).

The latest data shows that the lower 48, all the states apart from Alaska and Hawaii, experienced the second most extreme year of weather as well as record high average temperatures.

“This is consistent with what we would expect in a warming world but it is one data point and proves nothing on its own.” 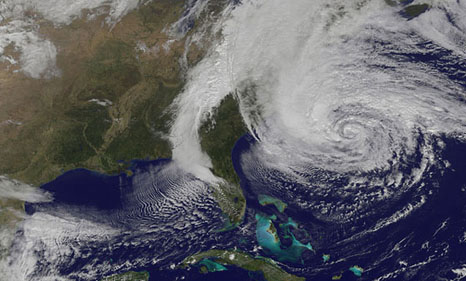 Increased tropical storms, drought, wildfires and record high temperatures made the weather of 2012 the second most extreme. (Source: NASA Goddard)

“Compared to the past, this result is an outlier, we expect these warmer temperatures to occur more frequently in the future however. The US has been warming and will continue to do so,” said Crouch.

“Climate change has played a role. So has local variation, it’s impossible to determine how much each has had.”

The year set many new precedents including a record warm spring, the second warmest summer and the fourth warmest winter. Autumn was only above average.

“Unfortunately, this won’t be the last time we break records like this,” said Angela Anderson, the director of the Climate and Energy Program at the Union of Concerned Scientists.

“The longer we delay reducing emissions, the more climate change we’re going to lock in. The president has promised to make climate change a priority in his second term, but he needs to turn those words into action.

“The price tag for dealing with unchecked climate change makes the fiscal cliff look like a crack in the sidewalk.”

NOAA measures how extreme a year’s weather has been by looking at the number of tropical storms that make landfall as well as the number of daytime and night-time record temperatures and the precipitation record.

1998 remains the most “extreme” year, largely as a result of the greater number of tropical storms that made landfall.

The US experienced widespread drought with 60% of the country under drought conditions at one point.

Agricultural losses hit $20bn and global food prices are expected to spike as a result.

It was the third most active tropical cyclone season ion the North Atlantic with the most famous storm, Sandy causing damage as far north as the Eastern Canadian coast as well as across New York, Connecticut and New Jersey.

Despite this, the storm had been downgraded by the time it hit the US so it did not contribute to the years extreme rating.

CHECK OUT this map of preliminary Significant U.S. #Climate Events for 2012 from [email protected]noaancdc: 1.usa.gov/UyP9rX