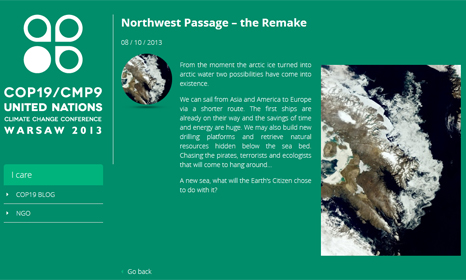 Concerns are being raised over Poland’s suitability to host UN climate talks in a month, after a government-run blog appeared to suggest melting ice in the Arctic could benefit the world.

The article, which is on the official COP19 website, hails the huge “savings of time and energy” from using a shorter sea-route across the North Pole.

“We may also build new drilling platforms and retrieve natural resources hidden below the sea bed,” the writer adds, “Chasing the pirates, terrorists and ecologists that will come to hang around”.

In reply, Korolec said: “txt only points out problem we face. Agree second scenario is not nice. But real if do nothing”.

Bankwatch analyst Tomas Wyns added: “Can someone tell the #polish #COP19 presidency that #UNFCCC is about avoiding #climate change, not to promote it.”

Another blogpost says: “we must never force the Earth’s Citizens to give up leading satisfying lives – they need to make their own choices. Quickly!”

Korolec’s spokesman Paweł Mikusek told RTCC they were pleased the Arctic article had provoked such a fierce debate.

“The readers considered the forthcoming, bitter, but unfortunately possible scenario as option we like. We do not. But how to react to the featured situation? Should we be silent?,” he said.

“We are glad, that the topic caused so much interest and discussion, because the matter is really very serious. We can see that our readers really care so that the black case scenario never comes true. So do we! May this spirit predominate among the delegates.”

The short article is the latest in a series of incidents that have led many to question Poland’s commitment to a tough global emissions reductions deal.

It has actively opposed reforms to Europe’s carbon trading system, and is currently on a collision course with the EU over the planned construction of two massive coal power plants, which Climate Commissioner Connie Hedegaard says could break the Union’s law.

The country’s Ministry of Economy will also be hosting a World Coal and Climate Summit in Warsaw alongside the UN talks, which is set to be opened by Deputy Prime Minister Janusz Piechociński.

“There will be no permission for that on our part. We are willing to call for a referendum [on the issue] for the first time in Europe,” he said.

Analysts say Poland’s stance on a 40% cut in CO2 emissions by 2030 on 1990 levels is understandable given its reliance on coal to generate over 90% of the country’s electricity.

RTCC has also seen an agenda of the pre-COP meeting that took place on October 2-4, where leaders from European heavy industry and lobby groups were allowed direct access to environment ministers and negotiators.

The key meeting included a keynote address from the chief executive of Lewiatan, a lobby group closely linked to the influential body Business Europe, which actively argues against the EU adopting tougher climate legislation.

In a subsequent debate entitled ‘Climate negotiations and transformation towards low emission economies – what does business expect from Governments?’, ministers were addressed by representatives from Ancelor-Mittal, Alstom and Cemex.

“It shows I am afraid what the Polish government really thinks about climate change,” said Michalak.

“It’s not just about one blog entry, but about the long list of outrageous, climate-unfriendly things the Polish government has already done around this COP, taking sponsorship from dirty industries, and running a coal summit exactly during the UN climate summit”

1447 UPDATE: The COP19 organisers have issued an apology 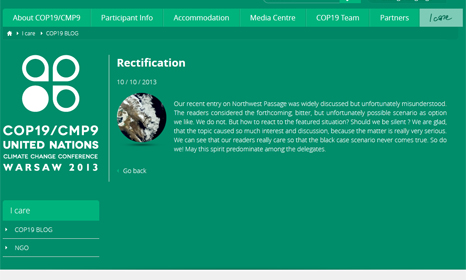