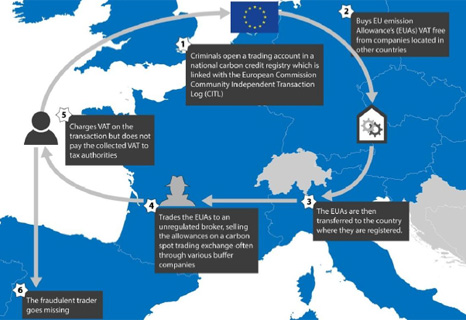 How VAT fraud is committed within the European emissions trading scheme (Pic: Europol)

Carbon trading schemes are at acute risk from criminal gangs and fraud, a new report from Interpol warns.

The police agency says uncertain regulations and a lack of oversight and transparency threaten the environmental and financial integrity of the world’s carbon markets, worth an estimated $176 billion.

And it says that there is a risk that if financial instruments related to carbon trading become too complex, the world’s carbon markets could spark a financial crisis on par with 2008.

The report says law enforcement agencies must be more aware of ‘carbon crimes’, improve communication between countries and impose tighter regulations on transactions and calculations of emissions reductions.

“Unlike traditional commodities, which at some time during the course of their market exchange must be physically delivered to someone, carbon credits do not represent a physical commodity but instead have been described as a legal fiction that is poorly understood by many sellers, buyers and traders,” Interpol says.

“This lack of understanding makes carbon trading particularly vulnerable to fraud and other illegal activity.”

Areas Interpol says criminals seek to exploit include over-claiming for credits, the sale of credits that do not exist, false claims relating to a project’s benefits, money laundering and online credit theft.

And it warns that even third party auditors, employed by schemes like the UN’s Clean Development Mechanism (CDM) to verify projects, may be susceptible to “bribes or collusion” to manipulate the results.

“The discrepancy between the objectives of the financial players in the market – to maximize profit – and the overall objective of the Kyoto Protocol – to ensure overall greenhouse gas emissions are reduced – places diverse pressures on the regulation of the market when drawn alongside other typical commodity markets,” says the report.

High profile criminal cases include a 2010 hacking attack on cement maker Holcim, resulting in the theft of 1.6 million credits worth €23.5million, while in 2011 hackers stole two million carbon credits from registries in Austria, the Czech Republic, Estonia, Greece and Poland.

In 2012 three men in the UK were sent to prison after running a £39 million tax fraud related to carbon trading. And earlier this year one of Britain’s most prolific money launderers Ian Macdonald was jailed for eight years for an £18 million carbon credits scam targeting vulnerable UK investors.

“It is imperative that the carbon trading markets remain secure from fraud, not just to protect financial investment, but also because the global environment depends upon it,” said Andrew Lauterback, Senior Criminal Enforcement Counsel at the US Environmental Protection Agency.

A statement from the UN body charged with monitoring carbon markets says Interpol’s guide highlights ‘potential risks’ to trading, but adds that “significant improvements” have been made to ensure projects under the CDM are thoroughly audited.

Jamal Gore, Deputy Chair of the International Carbon Reduction and Offset Alliance (ICROA) welcomed Interpol’s drive to raise awareness of criminality in the sector, but told RTCC many of the issues raised in the report had already been resolved.

“The publication of the guide in its current form therefore represents a missed opportunity. By highlighting both the challenges facing the carbon markets and the work already being done to drive best practice, it could have better served its purpose of reducing carbon trading crime. Instead it risks sowing doubt just when we need to redouble our efforts to fight climate change.”

He also recommended environment departments charged with implementing new mechanisms ensure they have sufficient experience of regulating financial instruments, citing this as a concern among analysts.

Carbon trading is the world’s fastest growing commodities market. In June, China launched the first of seven pilot projects, with an aim of developing a national emissions trading scheme (ETS) by the end of the decade.

The UN runs two schemes, the CDM and Joint Implementation (JI), which are targeted at improving low carbon investment in the developing world.