The surplus of carbon credits in the EU carbon market is approaching the European Commission’s own worst case scenario, a report by climate campaign group Sandbag reveals.

Last year companies rushed to exploit a closing loophole that allowed them to earn new emission allowances by destroying industrial greenhouse gases such as nitrous oxide and certain Hydrofluorocarbons (HFCs).

The technique allowed a perverse quantity of credits to be earned at a low cost and the practice was deemed ineligible from 2013. The result was an influx of offset credits to add to the existing surplus in the Emission Trading System (ETS).

“By setting the carbon budgets too high, policymakers have inadvertently granted European emitters a license to pollute at business as usual levels for much of the next decade,” said Damien Morris from Sandbag. 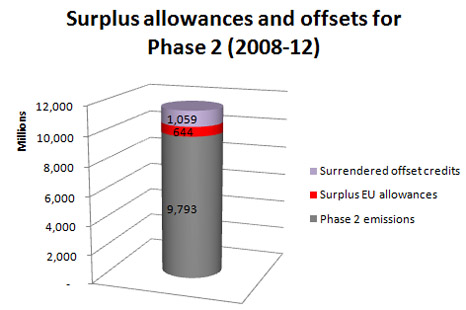 Sectors covered by the ETS such as cement and steel manufacture have been given a license to pollute, claims Sandbag

The volume of offset credits earned doubled in 2012. Attempts to rectify the imbalance in supply and demand in the market by withholding 900m credits from the next phase of the scheme were recently voted down in the European Parliament.

The so-called backloading proposal has now been sent back for tweaking by the Parliament’s Environment Committee before a further vote.

Analysts Thomson Reuters Point Carbon has slashed its price forecasts and is working on the basis that the short term reforms will never take place.

German Chancellor Angela Merkel, whose nation will have a huge influence on the outcome of the proposals, has said no decision will be possible until after September’s elections.

For 2008-2012, the cap on EU emissions covered by the scheme was set at 644m tonnes of CO2 higher than the actual emissions for that period. In addition to these excess credits, more than 1bn tonnes of offset credits have been added too. The total surplus is almost 1.7bn credits.

“These figures, which approach the European Commission’s worst case scenarios, should be a wake-up call for the parliamentarians who voted against the back-loading proposal in April,” he said.

“Without urgent action to repair the ETS, Europe risks leaving those sectors idle where decarbonisation is most important. This will oblige more ambitious member states to adopt unilateral climate and policies, fragmenting the internal market.”.

European Climate Action Commissioner Connie Hedegaard warned last week that the alternative to a healthy carbon market was not pretty.

“It seems everybody wants a strong ETS, that’s not what the debate is about. The alternative is a patchwork of 27 regulatory frameworks. That benefits no one,” she said at a meeting of European environment ministers in Dublin.