Afghanistan has taken another step towards implementing its national climate strategy by ratifying the Kyoto Protocol.

The move makes it the 192nd country or regional economic integration organization to sign up to the treaty, which will come into force for Afghanistan on June 23 this year.

Classed as a developing or Non-Annex I country, it will not have to adopt any binding emission targets, but will be required to draw-up plans to develop a low carbon energy and transport system.

Ian Macgregor, who acts as an advisor to Afghan negotiators at UN talks, told RTCC the news should act as an inspiration to other nations.

“Given all the problems that Afghanistan faces, it is making the effort to join with the international community to address climate change,” he said.

“Other countries, which are not facing such severe problems, should be doing much more to address climate change.” 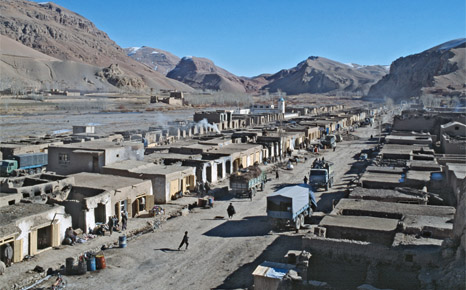 Afghanistan is experiencing high levels of economic growth but per capita income is still very low – rated in 2011 as $1000 per person (Pic: UN)

Kyoto has had a troubled life since its inception in 1997, with critics arguing that it lacks environmental integrity, given global emissions have increased since its launch.

The USA shows little sign of ratifying the Protocol, while Canada, Japan and New Zealand withdrew from the agreement at the last round of UN climate talks in Doha.

Supporters argue it has led to declining emissions in the developed world – particularly in Europe – and say it will form the basis of the global climate agreement scheduled to be agreed in 2015.

Adaptation rather than mitigation is likely to be the biggest challenge for Afghan policymakers over the coming years.

The World Bank reports Afghanistan’s per capita emissions as 0.2 tonnes per person; compared to 0.9 in Pakistan and 17.3 in the USA.

Afghanistan has suffered more than three decades of varying degrees of conflict, dramatically reducing its resilience to decreasing rainfall and other climatic changes.

Climate change and drought are especially serious for the country since 80% of the population rely on natural resources for their livelihoods.

In October 2012 the government launched a USD $6 million initiative largely funded by the Global Environment Facility (GEF) to build resilience amongst vulnerable communities.

“Climate change is not just an environmental issue in Afghanistan, it will also contribute to instability,” he said.

“The loss of ecosystem productivity forces people from rural areas to urban areas, and we have the problem then of sheltering them. This is the main issue we are suffering now.

“We are losing our land productivity and land degradation is another issue. We have limited glaciers which are the major water resource in my country, and they are melting now.”