New i3 range will cost around US$41,350 but BMW says it will cost less in the long run to maintain 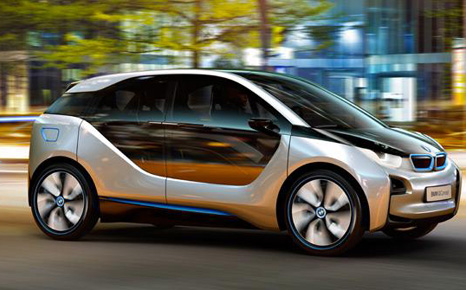 The BMW i3. The next car in the range is the i8 supercar. It has a plug-in hybrid power train and is due on sale in spring 2014.

BMW has unveiled the final production version of its much anticipated 100% electricity car, which it says has low running costs and fast charging times.

The car’s carbon-fibre passenger cell and a chassis made of aluminium gives it a curb weight of 1,195kg allowing for faster travel compared to traditional electric vehicles weighing in at 1,289kg.

Presenting the car to a New York audience, BMW chair Norbert Reithofer said the i3 was “more than just a car”.

“It’s a revolutionary step towards sustainable mobility. It is purpose-built around an electric power train to serve the needs of our megacity customers,” he said.

The standard BMW i3 offers between 80 to 100 miles, but the company also offers a i3 “Range Extender”, an optional small gasoline motor that roughly doubles the range.

The standard ‘Fast Charging’ unit will replenish the battery up to 80% within three hours, while a BMW ‘Wallbox’ will take between eight and ten hours from a standard household socket.

The base price for the BMW i3 has been set at €34,950 in Germany. If customers opt to purchase the Range Extender as an extra, the price in Germany will amount to €39,450.

BMW states that the vehicle’s running costs are low compared to traditional vehicles. Over a period of three years, the maintenance and running costs for a BMW i3 are predicted to be about 40% lower than those of a highly-economical 320dA registered in Germany.

In other countries, figures may even be lower, depending on the level of subsidies available for electric vehicles.

“The challenge for BMW, as for the other mainstream manufacturers, is to overcome public reluctance to try something new – much the same as it was in the early 1900’s for the first petrol cars,” Neil Hutchinson of Electric Power Classic Cars told RTCC.

“My view is that effective marketing and an emphasis on the fun-to-drive and cool factor is essential to sell these cars, which do look good in the pictures.

“There is a definite electric vehicle future, but take-up is slower and will be much slower than anyone forecasts – because of consumer reluctance and misperception,” said Hutchinson.

The global market for electric vehicles is showing positive development: After almost 93,000 BMW electric vehicles registered worldwide last year, a total of 150,000 units have been forecast for the current year.

Investment in charging stations and wider support for electric cars is seen as vital to their development. Telsa recently announced plans to build 200 supercharger stations across the US and Canada by 2015.

In February the EU issued binding targets for the installation of charging points to its 27 member states.

Under the plans almost 800,000 publicly accessible charging points will be in place by 2020 with the ‘type 2’ plug becoming the new standardised connection across the continent.

The UK government recently declared its support for the electric vehicle industry with an additional £500 million in funding out to 2020.

Speaking at the BMW i3 launch in London yesterday, UK Secretary of State for Transport Patrick McLoughlin said: “It constitutes one of the longest-term and most comprehensive packages of support for these vehicles anywhere in the world.

“It is crucial that the potential drivers and buyers of ultra-low emission vehicles are aware of the great strides being made by the auto sector in developing and building plug-in vehicles and understands that government is fully supportive of this effort over a long period.”

The BMW i3 will be released in Germany and other European markets in November 2013. The market launch of the BMW i3 in USA, China, Japan and several other markets will take place in the first half of 2014.