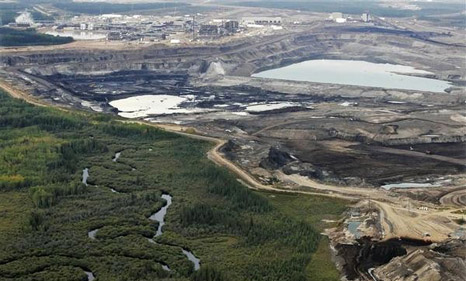 A steady flow of oil leaking from the ground in Canada is causing everyone to “freak out”, according to a local scientist.

The spill is a result of a major oil sands operation taking place at Cold Lake, Alberta, using an “in situ” method of extraction.

The spill has taken place across four well sites, with the latest covering up to 40 hectares, according to the Alberta Energy Regulator. No one knows how to stop the leaks, which are ongoing.

In situ extraction, the method used to extract the oil, is often used in Canada, since much of its resources cannot be extracted through traditional open-pit mining techniques.

With this method, oil is forced out of the ground by injecting thousands of gallons of high pressure steam into underground oil reservoirs. The hard bitumen heats and liquefies, and can then be pumped through the cracks in the ground that are opened up by the process.

Gillian McEachern from Environmental Defence Canada told RTCC, “Typically tar sands were mined in the big open pit mines that you see the ugly pictures of, and that’s for the more shallow deposits of the tar sands.

“To reach the deeper deposits you need to use this in situ drilling method, and that’s what these wells are. They are increasing the amount of tar sands being produced and over time they will come to be quite significant.

“Tar sands are expected to triple production over the next decade and much of that growth will be in this form of drilling.”

The process is often said to be more environmentally friendly than open pit mining, but the recent exposure of the leaks, which have been ongoing for at least six weeks, has cast serious aspersions on the safety of the method.

A scientist who had been working at the site spoke to The Star on the condition of anonymity over his concerns that Canadian Natural Resources were unable to stop the spill.

He said, “Everybody (at the company and in government) is freaking out about this. We don’t understand what happened. Nobody really understands how to stop it from leaking, or if they do they haven’t put the measures into place.”

Documents show that the clean-up operation began in May, and that, since then, more than 4,500 barrels of bitumen have been removed from across the four spill sites, while 30,600kg of oily vegetation has had to be cleared.

It has caused problems for both animals and people. Photographs show that contamination across lakes and forests have killed numerous animals, while the First Nation people have said that there are graves alongside the lake in the area affected by spill, and that they have been unable to access that area.

The spills are likely to cast doubt on this method of oil extraction, which is set to expand over the coming decade, during which tar sand production is expected to triple.

“I expect that it will raise public concern about the expansion plans,” said McEachern.

“The industry likes to point to this type of mining of tar sands as being more environmentally friendly than open pit mines, but really there’s no safe way to remove tar sands from the ground, and when you factor in climate change we really need to be going in the opposite direction and weaning ourselves away from oil rather than tripling production.”

The leak coincides with the three year anniversary of the tar sands oil spill in the Kalamzoo River, when nearly a billion gallons of tar sands diluted bitumen flooded out of the Enbridge pipeline in Michigan. The clean up operation is still taking place, and has cost nearly one billion dollars.

Tar sands are one of the most polluting sources of energy, with a barrel of oil from the oil sands producing three times more greenhouse gas emissions than a barrel of conventional oil.

The EU is currently considering whether to label the fuel “highly polluting” under its fuel quality directive – a move which would deter countries from importing it, and which the UK currently opposes.

President Obama has also signalled that his decision on the Keystone XL Pipeline, intended to pump oil from tar sand from Canada across America will be influenced by its effect upon the environment. The decision is expected to come at any point in the near future.