Annual investments of $674bn in the search for oil and gas could create a ‘carbon bubble’ of stranded assets if countries remain committed to meeting UN climate targets.

Scientists have already recommended that two thirds of the world’s proven oil and gas reserves must stay in the ground if the world is to keep within the 2°C limit of safe warming agreed under the 2010 Cancun Accord.

Despite this, new research by the Carbon Tracker Initiative and the Grantham Research Institute suggests the financial sector is either unaware of this target or does not believe it is realistic, given the $674bn invested every year looking for new sources of fossil fuels.

The report warns that there is a risk that ploughing this money into fossil fuels could create stranded assets worth $6trn in a decade.

It calls for governments, regulators and the investment community to give more weight to so called carbon budgets when appraising energy investments. 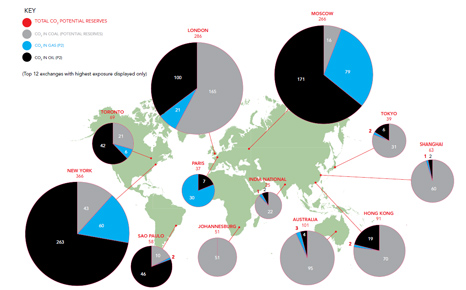 “Smart investors can already see that most fossil fuel reserves are essentially unburnable because of the need to reduce emissions in line with the global agreement by governments to avoid global warming of more than 2°C,” said Lord Stern, chair of the Grantham Institute and author of the Stern report on the economics of climate change.

“They can see that investing in companies that rely solely or heavily on constantly replenishing reserves of fossil fuels is becoming a very risky decision,” he added.

Then $674bn figure is taken from the top 200 fossil fuel and mining companies and includes spending on the search new reserves and the development of new ways to exploit them.

In 2008 ExxonMobil, ConocoPhillips and Chevron had 20.7 billion barrels combined. The state owned oil companies of Venezuela, Iran and Saudi Arabia had 99.4, 136.2 and 259.9bn respectively.

The World Economic Forum estimates that $700bn must be spent each year in emissions cutting projects to keep the world under the 2°C limit. The UN’s Green Climate Fund (GCF) has the aim of raising $100bn a year by 2020.

The development of large scale carbon capture and storage technologies has been derailed by a lack of investment from national governments and the industry itself.

The report, in its second year, warns: “The systemic risks threatening the stability of financial markets related to unburnable carbon are growing more entrenched since 2011, not less. The markets appear unable to factor in the long-term shift to a low carbon economy.

It calls for action from Finance Ministers and shareholders to ensure that the long-term risks to investments are more appropriately considered.

Public companies have a duty to shareholders to maximise profits, but this research goes to the core of arguments over the long-term strategies of the world’s leading investment funds.

James Leaton, research director with the Carbon Tracker Initiative said a different perspective was required to account for climate change.

“Institutional investors are currently driven by whether they are outperforming the market, rather than understanding the value that is at risk,” he said.

A report commissioned by Greenpeace earlier this year warned that exploiting just 14 of the largest fossil fuel projects in development would lock the world into 6°C of warming.

A campaign to encourage Universities, churches and community groups to pull their investment out of fossil fuels has recently gained momentum in the US.