The Mississippi River is set to close to barge traffic after officials deemed low river levels had made the route unsafe.

The US drought in 2012 was second only to that of the dust bowl era of the 1930s. While this single event cannot be attributed solely to climate change, it is widely acknowledged to have made a significant contribution.

The US army engineers have begun clearing rock pinnacles on the river bed and dredging to keep the route passable with queues of barges carrying corn, soya and other commodities to the Gulf coast.

The American Waterways Operators trade association and Waterways Council policy group estimates that January closures will hold up $2.8bn worth of trade, will affect 8000 jobs as well as creating more problems further down the supply chain. 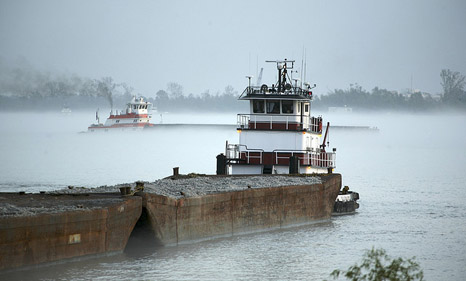 $180bn of cargo is transported along the Mississippi River every year. (Source: Flickr/eschhipul)

Reservoirs upstream of the affected areas of the Mississippi have been further reduced as water was released to irrigate the local area. The National Oceanic and Atmospheric Administration (NOAA) has predicted that the river’s level will reach an all time low on January 15.

The only consolation for shippers on the Mississippi is that winter is a quiet period for freight traffic on the river with just $7bn of its annual $180bn of cargo moving in January and December.

As well as causing $20bn in losses for US farmers, the drought also affects the energy sector. Coal is transported along the Mississipi, nuclear plants require freshwater for cooling and two of its largest hydropower plants including the Hoover Dam have suffered with reservoirs approaching 50% of their capacity.

The US also witnessed an outbreak of the West Nile virus, linked to the drought conditions.

The US is not alone in feeling these effects however. The Rhone, one of the five largest rivers in France, could lose 30% of its volume by 2050, according to regional officials.