Walmart, Costco, Apple and IKEA are some of the companies that have helped to deploy over 3GW of solar in the US 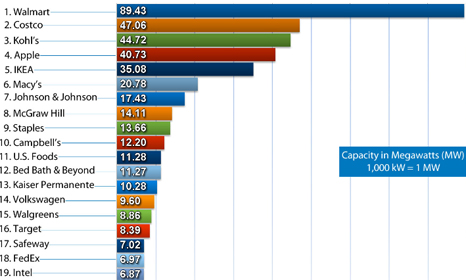 Walmart once again tops the USA’s 2013 solar capacity rankings with 89.43MW installed capacity, double that of second-placed Costco with 47.06MW.

New research from the Solar Energy Industry Association reveals the 25 companies with the highest total solar capacity as of August 2013 have deployed more than 445MW at over 950 different facilities, enough to power 73,400 American homes.

Their combined installations equate to more than one out of every three Americans living within 20 miles of at least one of these businesses’ solar installations.

“The list of companies moving to clean, affordable solar energy reads like a ‘Who’s Who’ of the most successful corporations in America,” said SEIA President and CEO Rhone Resch.

US businesses, non-profits and government organisations have blanketed their rooftops and properties with over 1,000MW of new photovoltaic (PV) solar installations.

As of mid-2013, cumulative commercial deployment totalled 3,380MW at over 32,800 facilities throughout the country, an increase of more than 40% over last year.

Walmart has 150 solar installations in seven countries producing enough energy to take 9,000 vehicles off the road for a year.

The company is also testing onsite and large-scale wind and solar thermal in various markets including Canada, Chile, China, Mexico and the US.

Two months ago, Ikea purchased a wind farm in Ireland as part of its €1.5 billion to fund renewable energy projects up to 2015. Apple’s data centres use 100% renewable energy.

In terms of industry achievement the retail sector is way ahead of the game having installed almost 280MW. At the lower end of the scale was the automotive industry with just over 21MW installed.

The research attributes this solar boom to the decline in the cost of PV systems. The average price of a completed commercial PV project has dropped by 30% since the beginning of the 2011 making solar more affordable than ever for American businesses.

Many other companies have made massive investments in both utility and distributed generation solar.

Google, Bank of America, Merrill Lynch and others have directly invested billions of dollars in the financing of solar energy installations across the country.

Some companies have also implemented programmes to encourage solar deployment at their customer’s homes. Specifically, Honda has established an investment fund with SolarCity to develop, finance and install systems at Honda customers’ residences.