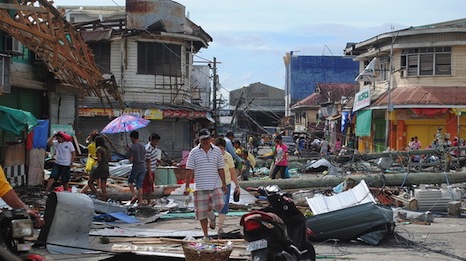 The impacts of Typhoon Haiyan were more extreme because of climate change, the World Meteorological Organisation (WMO) said today.

Extreme sea level rise has made coastal communities more vulnerable to the storm surges that follow extreme weather events such as Haiyan, said Jerry Lengoasa, deputy head of the WMO. He was speaking today in Warsaw at the launch of WMO’s provisional report on the state of the climate in 2013.

The storm surges caused by the typhoon were “well in the order of 7 metres in some parts,” he said, while wind speeds reached above 250km per hour near the coast.

“The combination of extreme winds and waves is really what has caused the loss of life to the extent that it has,” said Longoasa.

“Of course we cannot attribute individual tropical storms to climate change at this stage, but…we can certainly say that higher sea levels are making coastal communities more vulnerable to tropical cycles and the associated storm surges,” he added, referring to the recent findings of the UN’s climate science panel in the IPCC report.

While he said that “the jury is still out” on whether intense tropical storms will become more frequent in the future, the extremity of individual events is expected to increase as a result of the measurable changes in the conditions that create the storms.

Typhoon Haiyan struck the Philippines on Friday, just as negotiators began gathering in Warsaw for two weeks of discussions on a solution to climate change.

Since then, it has understandably taken centre stage at the negotiations, with Filipino negotiator Yeb Sano delivering an emotional speech on the toll the typhoon has taken on his country. He has pledged to fast throughout the two week long climate talks until meaningful progress has been made.

Sano challenged those who continue to deny climate change to “get off their ivory towers and away from the comfort of their armchairs” and see what has happened in the Philippines.

He said: “Science tells us that simply, climate change will mean increased potential for more intense tropical storms. As the Earth warms up, that would include the oceans.

“The energy that is stored in the waters off the oceans will increase the intensity of typhoons and the trend we now see is that more destructive storms will be the new norm.”

While the most recent IPCC report said that there is “low confidence” that the number of intense tropical storms would increase during the early part of the century, it added that it was “more likely than not” that they would become more frequent in the North Atlantic and the Western North Pacific, where the Philippines are located.

The report launched today by the WMO said that 26 storms have already passed through the Western Pacific this year, exceeding the 30 year average of 26—in spite of the fact that the typhoon season has not yet ended. And another storm is already brewing in the same area.

Stefan Rahmstorf from the Potsdam Institute for Climate Impact Research said that Haiyan has “probably been the strongest tropical storm that ever hit mainland since the beginning of observations,” and warned that global warming will aggravate the impact of these types of events in the future.

Increased devastation could be caused in the future by an increased chance of floods and landslides as a result of the increased rainfall, he said, on top of the storm surges caused by sea level rise.

The disaster in the Philippines has crystallised the issue of loss and damage, where rich countries pay developing countries for the impacts of climate change that are already inevitable. For many negotiators, the aid that comes in the aftermath of extreme events is no longer enough.

Last minute discussions at last year’s climate talks in Doha promised a mechanism to deal with these payments, but the response so far at these talks has been unenthusiastic.

Although the EU has already donated €13m to the Philippines, Jurgen Lefevere, a climate policy adviser at the European Commission, said today that although there needed to be a work program on loss and damage, the focus at the moment should be on how the payments would help, rather than how they would be administered.

He said: “The real challenge here is not to create new institutions on top of other ones.”