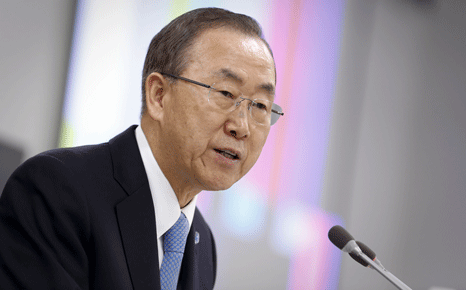 “Next year is the year for climate action,” according to UN Secretary General Ban Ki-moon.

In an article for LinkenIN’s ‘Big idea 2014′ series Ban says global ambitions to eradicate poverty and drive development in the world’s poorest countries depend on achieving a comprehensive climate change agreement in two years.

“Countries have agreed to finalize an ambitious global legal agreement on climate change by 2015. But there is a steep climb ahead and 2014 is a pivotal year for generating the action and momentum that will propel us forward,” he writes.

Ban also says his ‘Climate Leaders’ summit next September should be a forum for offering solutions, rather than intense negotiations.

“I am asking all who come to bring bold and new announcements and action. I am asking them to bring their big ideas,” he says.

“Until then, I will continue to put every effort into mobilizing political will, moving financial investors, influencing business leaders and motivating people everywhere to do all they can.”

The UN chief also talks of his hopes that climate finance levels can be ramped up over 2014, despite global concerns over the economic slowdown.

“Climate finance is an investment in the future. It must not be taken hostage by short-term budget considerations. The cost of inaction will only rise,” he says.

“Countries and companies are realising the economic advantages of combating climate change. Global demand for clean energy, such as solar and wind, continues to rise very sharply and clean energy investment has quadrupled over the last decade.”

Many hope the recently launched Green Climate Fund will start to leverage funding for developing nations ahead of 2015, but Ban says this can only happen if the public and private sectors learn to work together more effectively.

“We cannot mobilise private resources without a public lever,” he says. “Smart public financing can encourage local and international private investments. Investors and companies need to join forces with the public sector.