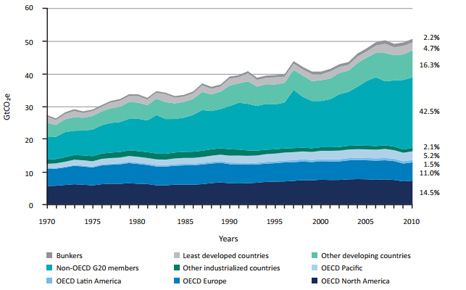 Global emissions have risen steadily in the past three decades (Pic: UNEP)

Global efforts to prevent dangerous levels of climate change are on course to fail, says a UN report released today.

The UN Environment Programme says current pledges to reduce emissions are inadequate, and likely to see options to limit warming to 2C above pre-industrial levels fade by 2020.

Produced with funding from the German government, the 64-page report, compiled by 44 scientific groups in 17 countries, highlights the challenge faced by envoys participating at two weeks of UN talks in Poland, which start on Monday.

Rapid growth in developing countries in the past decade means they are now responsible for nearly 60% of contributions to global emissions, illustrating their key role in addressing climate change.

“As we head towards Warsaw for the latest round of climate negotiations, there is a real need for increased ambition by all countries: ambition which can take countries further and faster towards bridging the emissions gap and a sustainable future for all,” said UN climate chief Christiana Figueres.

The main focus of negotiations in the Polish capital is likely to be a climate treaty that countries have agreed to sign in 2015 and implement in 2020.

This report is another reminder that governments will also need to focus on short term climate ambition in order to meet international obligations.

The 2009 UN climate summit ended with an agreement that “deep cuts” in emissions were required to ensure the global average temperature does not exceed 2C, a level that scientists believe could set off increasingly severe extreme weather events.

While the numbers sound ominous, the report says cuts are possible, and likely to cost in the region of US$100 per tonne of carbon dioxide equivalent.

Further investments in energy efficiency, renewable sources of electricity and fossil fuel subsidy reform could save up to seven GtCO2e by the end of the decade.

But the authors warn the costs of adapting to the consequences of a warming world could spiral out of control, with Africa facing a bill of $350 billion a year by 2070 if temperatures break 2C.

“As the report highlights, delayed actions means a higher rate of climate change in the near term and likely more near-term climate impacts, as well as the continued use of carbon-intensive and energy-intensive infrastructure,” said UNEP Executive Director Achim Steiner.

“This ‘lock-in’ would slow down the introduction of climate-friendly technologies and narrow the developmental choices that would place the global community on the path to a sustainable, green future.”