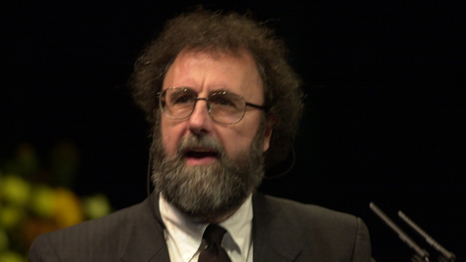 This September, the Intergovernmental Panel on Climate Change (IPCC) will publish a document that is certain to make a stir.

Bringing together scientists, governments, NGOs and industry leaders from 195 countries, the IPCC’s Fifth Assessment Report (AR5) will provide the most comprehensive coverage of climate science to date.

For the 840 scientists around the world who have been voluntarily beavering away on this massive document since the process was initiated in Hungary in 2008, the process is almost at an end. The results of Working Group I, the first stage of the IPCC’s Fifth Assessment Report, are due to be finalised this September at a meeting in an historic brewery perched on the edge of the Stockholm archipelago in Sweden.

After 14 years in the centre of this maelstrom of climate change activity, British climate scientist Bob Watson can finally observe the process with some detachment. He is speaking from his home in Washington, having just returned from his holiday, in the first part of RTCC’s new series of interviews with individuals who have played a key role in the climate debate.

In 1988, when the UN Environment Programme set up the IPCC and tasked it with creating a comprehensive review of the state of the knowledge concerning climate change, Watson was one of the 97 authors who worked on the first report.

According to Watson, the IPCC is now as “powerful” as it can possibly be. But, back in the 1980s, it was a different matter.

“When the decision was made to put together the IPCC, I always believed that it could become quite a powerful issue,” he says, “firstly because I believed that climate change issue is an important issue, and secondly because assessments are badly needed to make sure government policy and private sector policy is based on good, sound knowledge.

“So I did expect it to be completely successful and quite powerful, but I’m not sure everyone else did at the time.”

Since then, he has co-chaired Working Group II of the second IPCC report, and chaired the third. When this finished in 2002, he took a step back from the proceedings and has since worked as a chief scientific advisor for the UK government  and at the Tyndall Centre for Climate Change Research.

The IPCC started out strong, he says, and has since gone from strength to strength, due to improved observation, more sophisticated models and more powerful computers.

What has remained consistent throughout has been the philosophy lying at the heart of the IPCC, which he established alongside the team working on the first report: the IPCC should be policy relevant, but not policy prescriptive.

“It shouldn’t tell anybody what to do,” says Watson. “It should talk about the implications of different decisions, but without saying this is the right decision.

“It should talk about the effects of no action, it can talk about how a particular technology or policy will help to solve the problem, but it needs to lay the policy and technology options out rather than advocate for one or the other.”

That is not to say that he believes that scientists should never be advocates – but Watson says that there is something about the unique breadth and depth of the coverage of the IPCC that puts it in a class of its own.

“I think some scientists should be advocates for action – I have no problem with that – but I think when one does an IPCC assessment or any other national assessments they need to be free from advocacy.

“The IPCC must be policy neutral. It needs to explain the implications of what’s happening, but it should never advocate for a particular policy or a particular line of action. It should lay facts on the table, and then society should then take that knowledge and should hopefully say, ‘Okay then, how do we now address these serious issues?’

“Advocacy of some scientists is fine, but not when they’re writing an IPCC report. There, the facts must speak for themselves.”

The IPCC does not exist in a policy vacuum, and by the time it is published in September, every line will have been pored over not only by scientists, but also by governments and policy makers in an extraordinarily thorough twice-peer-reviewed system.

This is a crucial part of the process, says Watson, because it means that the governments as well as the scientists own the reports.

“It means they can’t argue against the science, because they’ve already agreed what the science is, basically,” he says.

“How they use that science and make it policy will vary from one government to another. Some will focus on, ‘My god, the climate’s changing, the projections show even larger change,’ while others go, ‘Yeah, that’s true, but there are still some uncertainties here’.

“The key point is, everyone will agree what the state of knowledge is, but different governments will make different decisions on how to use that knowledge.” 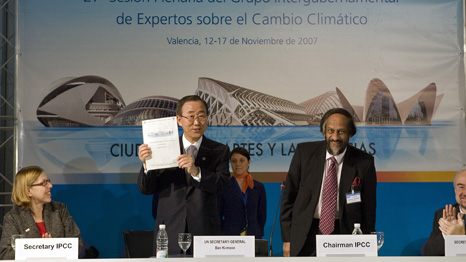 Secretary-General Ban Ki-moon (centre) shows the participants of the IPCC a copy of the fourth IPCC assessment report on the mounting risks of climate change (pic: UN)

But despite the overriding philosophy that the IPCC should be absolutely neutral, it has always had to fight accusations of partiality, which has prevented governments from implementing its findings into policy with the emphasis that Watson feels it deserves.

In 2003, for instance, the year after the Third Assessment Report was completed, a report to the Republican Policy Committee accused the IPCC of promoting “undue alarmism”, while a recent leak of the AR5 in the Economist led many to believe that the climate may be less sensitive to carbon emissions after all – a conclusion which scientists involved in the process were quick to brand as premature and misleading.

The fraught nature of the report is also indicated by the suspicion and sometimes outright abuse received by the scientists involved in the process. Scientists reported receiving death threats due to their involvement in the “Climategate” scandal – a storm of accusations that several IPCC authors had manipulated data to support their own conclusions. Three UK inquiries, one by the House of Commons science and technology select committee and two commissioned by the University of East Anglia, ultimately found these to be unsubstantiated.

Furthermore, the very language in which the findings of the IPCC are couched can prove problematic. Its precise system of verbal statistics – where “virtually certain” means a 99% probability, “very likely” means 90%, “likely” means 67%, and so on – provides ample opportunity to those so inclined to read a higher level of doubt into statements than actually exists.

But Watson says that while its findings may not always translate into government action, this is not because of any failings on the part of the IPCC: it is because politics get in the way. And no matter how authoritative the voice with which the AR5 report speaks in September, this is not a problem that it can overcome alone.

“The IPCC is a powerful credible entity,” says Watson. “The fact that some governments are not willing to make the sort of decisions we need to protect the earth’s climate system is not a failure of the IPCC.

“It is fundamentally the fact there are large vested interests, especially in some parts of the fossil fuel industry, that just don’t want to see change. There are a lot of political issues, economic issues, equity issues surrounding the issue of climate change.

“I think most governments of the world have not acted as expeditiously as we need. We’ve wasted much of the last 20 years in not significantly reducing greenhouse gas emissions.

“Hopefully the fifth assessment report will galvanise a response, but it is a highly political situation.”

But while more action is needed, the policy that emerges from the IPCC reports is never homogenous, and nor, says Watson, should it be.

While the final AR5 publication will inevitably be forensically detailed – the last one was over 3,000 pages long – it has to remain neutral enough to be adapted to the numerous economic and political situations across the globe.

He says, “There’s never just one solution – the solution could vary from one country to another, technologies might be better in a developed country versus a developing country, some policies might work better in one country or another, and so we decided at a very early stage that we have to be relevant but not prescriptive.”

Besides, he adds, there was another reason for insisting from the very beginning that the IPCC remain aloof from the world of policy: “We knew that as soon as you start to tell governments what to do, they’re not going to listen.”

Even getting governments to listen to the science has proven a challenge over the years, and it is not one that is going to get any easier.

While it was Watson and his generation of scientists that worked to put climate change on the map in the first place, the chair of this year’s IPCC, Rajendra Pachauri, has a particular problem on his hands: the fact that, while the volume of greenhouse gas emissions being pumped into the atmosphere has grown ever larger, the rate of climate change has, in fact, slowed over the past 15 years. 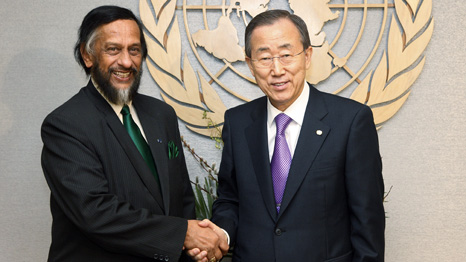 And they keep saying this, despite a number of explanations on the table as to why the temperature change has slowed. Watson emphasises the last word carefully, stressing that it has not stopped or reversed: the temperature is still very much on an upward trend.

“The IPCC should always address all of the issues, and particularly the contentious or difficult issues,” says Watson.

“The deniers are saying we’ve obviously got the theory wrong, because greenhouse gases are still increasing – which they are, at a rapid rate – so why isn’t the temperature responding? Therefore, the IPCC must address difficult issues like this, absolutely.”

The impetus to address not just the most controversial issues, but all of the aspects of climate change that are affecting people across the world, is growing ever more urgent. The AR5 will be the last IPCC report to be published before the 2015 UN Climate Change talks in Paris, where the world’s nations are expected to achieve a global legally binding deal on climate change, and it is likely to form a key part of the discussions.

The role that climate change will have on development and social justice is also becoming more apparent, and throws into sharp relief the moral imperative of taking rapid action. According to a recent report by the World Bank, the largest climate change-induced increase in poverty is likely to occur in Africa, followed by Bangladesh and Mexico.

For all the improvements in the models and computational methods of projecting climate change, for Watson the greatest achievement of his generation of scientists is simply that they have managed to cement the issue on the political agenda, and particularly that they have been able to map out the impacts on development.

“We’ve linked it to changes in health, food, water, human settlements being flooded. We’ve shown that there are technologies that can be used to reduce greenhouse gas emissions. We’ve talked about the social and economic issues. So we’ve clearly raised the issue.”

But, he continues, it is now time to pass the baton, and the AR5 – its reception and its confidence in its own results – is where this transition into a new, more action-orientated approach towards climate change will be realised.

He continues, “We’ve stimulated some movement but nowhere near adequate at the moment.

“There are a significant number of industrial companies which also take this issue seriously – Unilever, Shell and BP have got a fairly open mind on this issue – so we’ve raised the issue.

“But clearly far more action will be needed,” he says. “Clearly.”