John Kerry promises to be “passionate advocate” on climate change

Senator John Kerry has indicated climate change will be a priority as Secretary of State, calling for American leadership on what he termed a ‘life threatening issue’.

Addressing the Senate Foreign Relations Committee at his nomination hearing, Kerry said USA foreign policy would be defined by its approach to global warming, together with political unrest in Africa and victims of human trafficking.

Taking issue with many at the top of US politics who refuse to accept climate change is taking place, and recalling both Hurricane Sandy and the ongoing US drought, Kerry said this was not an issue he planned to back down on.

“I will be a passionate advocate based not on ideology, but on facts and science,” he said, adding: “This is a six trillion dollar clean energy market – and we better go after it.” 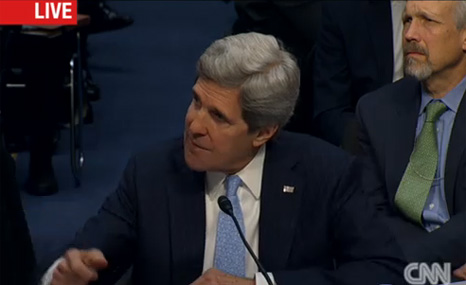 Kerry has extensive experience of international climate negotiations, and pushed for national laws to limit emissions while in the Senate

The economic case for tackling climate change formed the core of Kerry’s argument during the hearing.

Dismissing the concerns of Republican Senator John Barroso, who claimed climate friendly policies would do “significant harm” to the USA, Kerry said investment in clean technology could replicate the boost that IT gave to the US economy in the 1990s.

“The solution to climate change is energy policy. And the opportunity of a new energy policy so vastly outweigh the downsides that you are expressing concern about – and I will spend a lot of time persuading you and other colleagues otherwise,” he said.

“We’ve gotta get into the clean energy race – in Massachusetts one of the fastest growing parts of the economy is clean energy, and it’s the same in California.

“It’s a job creator – I cannot emphasise this enough. We reckon the energy market is a 6 trillion dollar market with 4-5 billion users going up to 9 billion in the next 20-30 years.

“There are extra opportunities in modernising US’s energy grid – we don’t even have a grid – we have a great big hole in the middle.”

The Senator also indicated he would proactively engage with China, the world’s leading emitter by a clear margin, to establish how both countries can work together towards a global climate deal.

“If we just sit around and do nothing we’re going to have a problem, because China is soon going to have double the emissions of America, so we’ve got to get these folks as part of a unified effort,” he said.

An early test of his resolve on this issue will come shortly.

The State Department must choose whether to grant TransCanada a permit to build the 1,700-mile Keystone XL pipeline extension, that will transport oil from the Alberta Tar Sands to the gulf coast.

On Tuesday it announced it was delaying a decision. In a statement Erich Pica, president of Friends of the Earth warned Kerry they are expecting him to veto its construction.

“Senator Kerry has spent many years calling for more ambitious and decisive action to combat climate change,” she said. “As secretary of state he will have the chance to turn those words into reality.”

“Kerry’s first test will be assuring that the new, supplemental environmental impact statement conducted by the State Department will fully assess the climate impact of allowing construction of the Keystone XL pipeline.

“This assessment would clearly show that permitting the pipeline would be an environmental time bomb.”

Echoing these concerns over Keystone, Oil Change International’s David Turnbull told RTCC Kerry’s challenge will be to set the agenda at home and abroad.

“I hope Kerry can set a new course for the US as productive players in the negotiations, while also setting a solid example at home,” he said.