Arctic: Shell has confirmed it will not resume its Arctic drilling activities this year. The company experienced a number of setbacks while attempting to drill exploratory wells off the coast of Alaska. Two damaged drilling vessels have been sent to Asia for repairs. (Reuters) 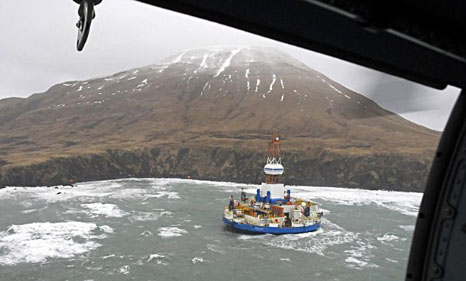 The Shell drilling vessel the Kulluk, ran aground off the coast of Alaska (US Coast Guard/Greenpeace)

Lois N. Epstein, Arctic program director for the Wilderness Society and a member of the Interior Department panel that reviewed Shell’s Arctic efforts said: “This is not a surprise, as Shell has had numerous serious problems in getting to and from the Arctic, as well as problems operating in the Arctic.” (New York Times)

Activists are celebrating but Shell described the move as “a pause” in drilling and is likely to resume work in the summer of 2014, once its drilling vessels are repaired.

Shell’s Marvin Odum, director, Upstream Americas said: “We’ve made progress in Alaska, but this is a long-term programme that we are pursuing in a safe and measured way.” (Shell)

Germany: The German government is close to allowing shale gas exploration but only under strict environmental  rules. No fracking near protected areas or sources of drinking water will be permitted and environmental impact studies will be mandatory. (EurActiv)

UK: Rear Admiral Neil Morisetti, the UK Foreign Office’s new climate change envoy has said the country will feel the effects of climate instability even if the direct impacts are on the other side of the world. “If you’re seeing increased instability in those…places where we see our resources coming from – energy for example, volatility and prices, impacts on our ability to be competitive,” he said. (RTCC)

Japan: Wind turbine manufacturer Vestas says Japan will need to improve its grid infrastructure if it wants to make the most of renewables. The country is looking for new low carbon electricity sources to replace the nuclear power stations it is shutting down. (Bloomberg)

US: An energy advisor to President Obama Heather Zichal, has said the administration’s energy policy does not “look perfectly pretty from the outside” but that its climate approach and the development of renewables meant things were changing. She said they would soon be able to deliver “energy policy that makes a lot of sense”. (Reuters)