The world could be locked into dangerous levels of global warming if 14 planned fossil fuel projects get the go ahead, according to a new report commissioned by Greenpeace.

Emissions from the developments, which include expansion of the Canadian tar sands and Arctic oil drilling, would increase greenhouse gas emissions from fossil fuels by 20% making the 2°C limit on warming unattainable.

“In 2020, the emissions from the 14 projects showcased in this report – if they all were to go ahead – would raise global CO2 emissions from fossil fuels by 20% and keep the world on a path towards 5°C to 6°C of warming,” states the report which was written by the Ecofys consultancy.

The projects in the Point of No Return report include the expansion of Indonesian and Australian coal exports, a tripling of production from the Canadian tar sands and extensive offshore drilling in Brazilian waters. 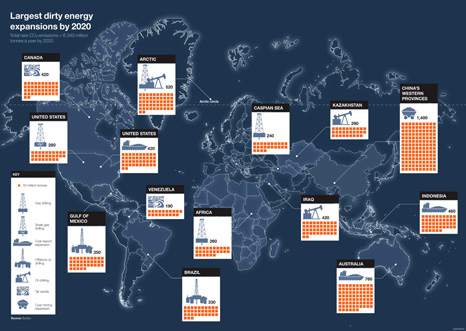 “To avoid the worst impacts of climate change, the rise in global temperatures needs to be limited to below 2°,” the report reads.

“Therefore, the addition of CO2 of this magnitude in the next few years would push the climate beyond the point of no return, locking the world into a scenario leading to catastrophic climate change, and ensuring that we run out of time.”

Based on a number of scenarios developed by Ecofys that plot a route to keep the world within 2°C of warming, these projects, if fully developed, would limit the probability to less than 50%.

“The Ecofys 75% [probability of staying within 2°C] pathway requires ensuring emissions peak by 2015 and then drop by 5% annually. The new CO2 emissions avoided by cancelling these dirty energy projects would cover about one third of the total reductions needed to head off catastrophic climate change.”

The IEA has pinpointed surging demand from India and China as the main driver of the expansion of coal use while the rising oil price has made more expensive oil and gas exploration such as tar sands more economical.