Climate deal in 2015 would ‘honour memory’ of Chavez

An ambitious and binding climate change deal in 2015 would “honour the memory” of Venezuela’s recently deceased President Hugo Chavez, the country’s lead climate negotiator has said.

Claudia Salerno, Venezuela’s Special Presidential Envoy for Climate Change, says the issue and its underlying causes were priorities for Chavez, who saw it as an example of the failure of capitalism.

“The only thing we can do to honour his memory is to bring to him the kind of ambitious agreement in making the world to be a safer and a better place,” she told RTCC.

Chavez memorably addressed the Copenhagen UN climate talks in 2009, blaming “the rich” for environmental degradation and asking “do they have plans to go to another planet?”.

“At that moment he became a leader of a new kind of speech regarding climate change, in which he was very clear to point the finger at what was behind the failure that nobody was brave enough to mention – economical interest,” Salerno said.

“He was the first leader in the world who started transforming the debate of climate change from a merely environmental issue to an economical and social dimension.” 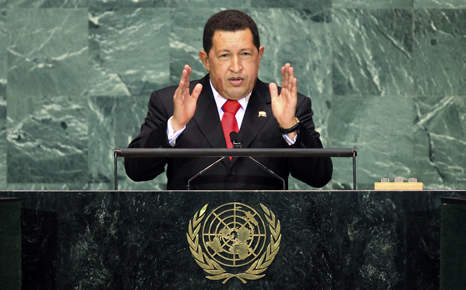 Chavez warned delegates at the Copenhagen climate talks that the UN had been taken over by an ‘imperial dictatorship’ (Pic: UN Photos/2009)

Salerno slashed her hand during the final session in 2009 ‘to show how developing countries are bleeding’, and together with her President led efforts to block the resulting Copenhagen Accord, an agreement she maintains failed the multilateral process.

Despite that setback, Salerno says Chavez felt emboldened by his experiences in Copenhagen, to the extent that the leader of a country with the world’s largest oil reserves called on fellow OPEC members to treat global warming seriously.

“This was a risky position for Venezuela and we were criticised by other oil producers for taking an ambitious and environmental position, but we do consider strongly that if we don’t have a better world, we are not going to have anyone to sell that oil to,” she said.

“It created a different perspective for OPEC that now themselves are talking about an energy revolution, and changing and transforming patterns of energy around the world, because they know we need to have this discussion economically, but also need to have a social and environmental approach to it.

“And I think that we have heard countries like Saudi Arabia, very conservative previously, actually having a more progressive statement surrounding climate change, helping to push an ambitious agreement.”

Some European climate negotiators RTCC has spoken to in the past have a less generous view of Venezuela’s climate strategy. One argued that some of the country’s efforts to block the development of market mechanisms within the UN climate convention were a “low ambition” pathway.

Another said they could be “difficult” opponents, but said Salerno should be given credit for steering the 2010 Cancun talks away from possible collapse, after Bolivia blocked proposals at the last minute.

Off the record reactions to this week’s Like Minded Group statement, of which Venezuela is a leading member, and which blamed rich countries for slowing progress at the UN talks, were equally mixed.

And it is hard to see how Chavez’s calls for environmental integrity can be balanced with Venezuela’s plans to continue exploiting its untapped reserves of oil, one of 14 ‘carbon bombs’ Greenpeace recently warned could send the world into a +2°C scenario.

“He insisted that climate change is an existential crisis, while simultaneously pushed for the development of the Orinoco’s heavy crude. Under Chavez, Venezuela’s oil dependency increased and it now obtains 94% of export earnings and over 50% of its federal budget from oil revenues.”

Edwards credits Chavez for raising “important issues of climate justice and Northern reponsibility for emissions cuts”, but says “vociferous rhetoric” has often undermined its position at the talks.

“It has sometimes used the UNFCCC as a podium to lambast the U.S. and capitalist system leading some to question whether Venezuela is using the process as a smokescreen given the lack of real action at home on climate change and its interest in protecting its oil sector from a robust treaty,” he said.

Salerno rejects this analysis, arguing that Caracas’ efforts to develop a sustainable development strategy, build the capacity of the ALBA group of Latin American countries and maintain a vocal presence within the UN climate convention deserve respect.

“They should look carefully at the things we have done to push the process forward. Venezuela became a leader with a strong voice after Cop in the climate change regime,” she said.

“What we are showing is that our commitment is only with ambitious outcomes. We said no in Copenhagen because it was not ambitious enough – not because we wanted to simply block.

“After that the ambition in our country was even bigger, because we needed to show in our own acts that we were not just blocking and molesting the process, but actually just trying to get it back to multilateral roots to be sure we have an agreement to be accepted by all.”

Future efforts are hard to predict. New elections are set to be called in 30 days. Chavez won 54% of the vote last October, suggesting his nominated successor, former bus driver Nicolas Maduro, will not win easily.

Any incoming President will face an economy the BBC’s Robert Plummer describes as “beset by crumbling infrastructure, unsustainable public spending and underperforming industry.”

Equally concerning from a climate perspective is the prospect of a new administration increasing oil production, as the Financial Times’ Nick Butler suggests they will do.

Salerno remains confident that the United Socialist Party of Venezuela will win, and also that awareness among the public about climate change and its causes will continue to grow.

“We hope the country will continue along the path that Chavez started 14 years ago; to make it a Socialist and revolutionary one. We hope that we will again win, as we have been doing for the past 14 years and seven elections,” she said.

“The legacy he left was building up inside the country the notion of climate change and now that has spread to other ALBA countries, to other Latin American countries and also we have spread the commitment to other OPEC countries as well.

“Chavez has already left his legacy there – we have a slogan in Venezuela that ‘we are all Chavez’ – now we can say there are so many climate change Chavez everywhere that he can rest easy knowing that we will be many fighting for his dreams.”

She added: “We are going to transform the sad moments into more strength, but now is going to be very difficult.”