As 2020 draws to a close, we look back at Climate Home News’ reporting of a year defined by the coronavirus pandemic 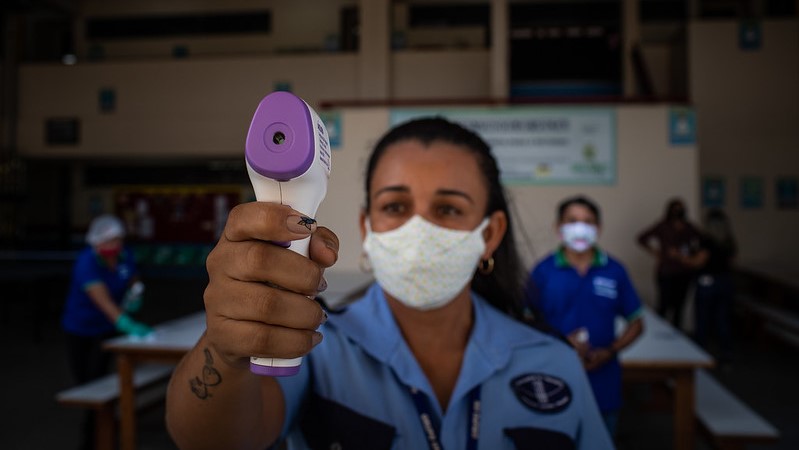 An employee at a school in Manaus, in the state of Amazonas, Brazil, takes the temperature of students arriving for class. (Photo: IMF / Raphael Alves/Flickr)

Back in January, no one could have predicted the turn this year would take. The coronavirus pandemic has shaped 2020 and will continue to define how countries respond to the climate crisis in years ahead.

But one thing held true: 2020 was meant to be a critical year for the climate and, in many ways, it was.

Five years after the Paris Agreement was signed, fragile political momentum shows the accord has created the framework for countries to deliver deeper emissions cuts.

Governments are not on track to limit global warming to 1.5C by the end of the century – on which the survival of vulnerable communities depends – but many have shown willingness to close the ambition gap.

The US exit from the agreement will be short-lived. President-elect Joe Biden has promised to rejoin on his first day in office as the rest of the world impatiently awaits for the new administration to demonstrate how it is going to cut emissions at home and galvanise greater action abroad.

Around the world, climate impacts are reaching new records and support for vulnerable nations to cope is still seriously lacking. Poorer nations are crippled by ballooning debt while having to divert time and resources to respond to the health crisis and the economic downturn.

However, Covid-19 has proved that with political will, trillions of dollars could be mobilised fast to put the global economy on life support. It has opened a window to wean societies off fossil fuels and rebuild greener and more resilient economies.

2020 also saw the expansion of the Climate Home News team with reporters Joe Lo and Isabelle Gerretsen joining, while Megan Darby took the reins as editor.

Throughout the year, we have tracked the impacts of the pandemic on climate action and diplomacy and continued to report on the people, institutions and decisionmakers taking the world into the future.

Here were the key stories.

Governments promised a green recovery to Covid-19 but the rhetoric hasn’t been matched by action. Instead, countries are planning to increase fossil fuel production to 2030 and are pumping more money to support fossil fuels than they are clean energy.

In April, 17 European climate and environment ministers wrote in Climate Home that the European Green Deal needed to become the cornerstone of the union’s recovery plan. But international institutions and governments are yet to fully walk the green talk.

And yet, the pandemic has exposed the vulnerability of the global economy, its entrenched inequalities and the need to build future-proof societies. It has given a glimpse of what cleaner cities could look like and the urban planning transformations needed to sustain it.

And it exposed the weakness of the global food system leaving millions facing hunger. A UN Food Systems Summit is due to address the issues in the autumn of 2021.

The pandemic is threatening to reverse significant development gains as climate impacts continue to intensify, with 2020 on track to be among the three warmest years on record.

The Horn of Africa suffered its worst desert locust invasion in decades, devastating crops and small-holder farmers’ livelihoods. India and Bangladesh were hit by super-cyclone Amphan. The monsoon season that followed was marked by heavy flooding, forcing millions into shelters, exacerbating the risk of Covid-19 infections. Later in the year, Vietnam, the Philippines and Central America, were battered by record-setting storms.

Meanwhile, poorer nations are faced with ballooning debt as they respond to the public health crisis and the economic downturn. Money is being diverted from climate programmes to keep schools and hospitals open.

Campaigners have expressed concerns climate finance could be exacerbating vulnerable nation’s debt burden as the share of loans is growing and delivered nearly three quarters of all finance in 2018.

The 12 December marked five years since the Paris Agreement was signed and the nations of the world committed to keep global heating “well below 2C” and strive for 1.5C by the end of the century.

Megan Darby looked back at what the agreement did and failed to achieve.

To celebrate the occasion, the UN, UK and France invited nations to present tougher climate commitment at a virtual “ambition” summit – a six-hour marathon of back-to-back pre-recorded video speeches by 75 heads of states, the Pope, business and civil society leaders. Climate Home followed the event blow by blow.

There were positive announcements from the EU, UK and a number of small and developing nations but only small steps from China to curb emissions in the next decade and nothing new from India. Cop26 president-designate Alok Sharma reminded everyone that the world was not on track to hit the Paris goals without “a step change” ahead of the Glasgow summit in November 2021.

From China, Japan and South Korea to Argentina and South Africa, the net zero emissions target has become the new benchmark for climate ambition. The incoming US administration promised to join the growing club of nations ready to end their contributions to climate change.

By early 2021, the UN estimates that countries representing around 65% of global carbon emissions and around 70% of the world’s economy will have committed to carbon neutrality. UN chief António Guterres is calling for “a quantum leap towards carbon neutrality” next year.

Demand for carbon offsets is growing, raising concerns the “net” could be used by big emitters as cover for continued pollution. Scientists and campaigners are warning that robust quality checks are needed so nobody gets a free pass to emit more CO2 into the atmosphere. Meanwhile, UN special advisor Mark Carney is driving efforts to scale up the voluntary carbon market.

The pandemic has accelerated the end of coal power, which took the brunt of a fall in energy demand this year as renewable energy proved to be more resilient to Covid-19 restrictions.

Across the world, financial institutions are slowly turning their back on financing new coal plants and promising to align with the goals of the Paris Agreement. Joe Lo dared to ask the question:

Pakistani prime minister Imran Khan said he would not approve any more coal power plants and pivot to renewables – a potential model for other countries targeted for large Chinese coal investments. This came as researchers at China’s environment ministry, supported by international NGOs, floated the idea of a ban on financing coal abroad.

And smaller progressive countries are going further still, announcing the end of oil and gas production and urging other producing nations to do the same.

Meanwhile, Megan Darby explored what Kamala Harris’ proposal for global negotiations on a managed decline of production could look like and reflected on the blow the pandemic inflicted to the oil industry in a must-read analysis.

While increasingly isolated, some large producers are showing little sign of transforming their economies away from fossil fuels.

And despite its rhetoric, the International Energy Agency continues to dodge hard questions about phasing out dirty energy.

Expectations are running high for US president-elect Joe Biden to usher in a new era of renewed multilateralism for climate action. His election in November was a pivotal moment for climate diplomacy and injected much-needed hope the Paris goals could be kept within reach.

The appointment of John Kerry as presidential climate envoy was widely welcomed across the climate space. But the Biden team has its work cut out to reverse four years of retreat under Donald Trump and put the world’s largest economy onto a net zero path.

And how much the new administration will be able to deliver on its climate plans hangs in the balance of a two election runoffs in Georgia on 5 January, which will determine who of the Democrats or Republicans will control the Senate.

In the air and at sea

Both aviation and shipping are being let off the hook to deepen emissions in the face of strong vested interests and industry pressure.

Isabelle Gerretsen looked at what regional action could be taken after nations at the International Maritime Organization agreed a deal that would shave just 1% of shipping emissions this decade.

And as flights were grounded because of Covid-19 restrictions, we reported on how this could toughen the aviation sector’s climate goal. Following intense lobbying, a small number of countries at the International Civil Aviation Organisation, including European nations, bowed to industry pressure and accepted to weaken the target – effectively postponing the date airlines will have to pay for their growing climate impacts.

Throughout the year, Climate Home has continued to tell the stories of those on the frontline of climate change, whose voices are rarely heard across the media.

With the help of freelancers from across the globe, we reported from Mozambique, where citizens have been sold a false promise of riches from a $20 billion project to extract, liquefy and export gas. And from Mexico where indigenous communities are suing the government over plans by Total-owned company to install more than a million solar panels near their homes.

From the Amazon, Fabiano Maisonnave and photographer Lalo de Almeida reported on the impact of Jair Bolsonaro’s administration on forest clearance, indigenous rights and landgrabbing.

Activism in the courts

While campaigners may not have been able to take to the streets this year, activism has continued in the courts.

Finally, as the urgency of the Black Lives Matter movement struck home, activists have been forced to confront the uncomfortable truth: the climate movement’s whiteness is its weakness.