Biden has promised to reenter the Paris Agreement, marking the end of a four-year assault on climate protections under Donald Trump’s presidency 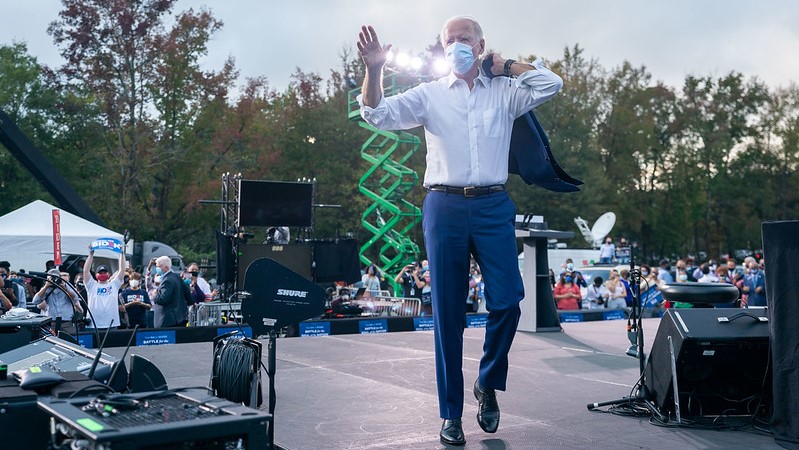 Joe Biden is heading to the White House with a promise to overturn four years of US retreat on climate action.

The election was called for Biden on Saturday, as his lead in the swing state of Pennsylvania – where he was born – with 98% of the vote counted put the result beyond dispute. Biden was also pulling ahead in Arizona, Nevada and Georgia, putting him on track to win 306 electoral college votes, comfortably above the 270 needed to secure the US presidency.

“[Voters] have given us a mandate for action on Covid and the economy and climate change and systemic racism,” Biden tweeted in anticipation of victory.

It marks the end of a four-year assault on environmental protections from the White House under Donald Trump.

Elected on the most ambitious climate platform ever presented by a presidential candidate, Biden promised a $2 trillion clean energy revolution.

He will govern with Kamala Harris as vice president, who has a track record of suing oil companies as former attorney general of California.

But their ability to deliver emissions cuts will be hampered by a disappointing performance for the Democrats in the Senate race. Control of the upper house is expected to come down to two run-offs in Georgia in January.

Biden has promised to rejoin the Paris Agreement — which the US formally left on Wednesday — on his first day in office on 21 January.

Today, the Trump Administration officially left the Paris Climate Agreement. And in exactly 77 days, a Biden Administration will rejoin it. https://t.co/L8UJimS6v2

The pact requires all countries to present new or improved 2030 climate targets to the UN. As the world’s second highest emitter, the US is critical to meeting the Paris goal of limiting global heating “well below 2C”.

Biden promised to achieve 100% clean electricity by 2035 and put the US on track to cut emissions to net zero by 2050. According to Climate Action Tracker, if the US achieves this goal, it will shave 0.1C off global warming by 2100.

The US would follow major Asian emitters China, Japan and South Korea in aiming for net zero, bringing 62% of global CO2 emissions and nearly three quarters of GDP under a carbon neutrality goal.

“Taken together, the US and China going to net zero emissions would reduce our estimate of end-of-century warming to 2.3-2.4C,” said Niklas Höhne of NewClimate Institute, a Climate Action Tracker partner organisation.

The race for the control of the Senate is critical. If the Republicans retain a majority, it will present a serious curb on Biden’s climate ambition, including on setting tougher carbon-cutting goals.

Although Biden won’t rush out with a 2030 emissions target, his timeline is tight. Governments are expected to submit new or improved climate goals ahead of the Cop26 UN climate negotiations in Glasgow, UK, November 2021.

The UK and UN are hoping many leaders will reveal their pledges at an online summit on 12 December, the fifth anniversary of the Paris Agreement. That leaves the US playing catch-up.

“China and the EU will not wait long before demanding the United States get back on track to act on climate. They will look to the US to put forward a nationally determined contribution that is both ambitious and credible – meaning in the range of a 50% reduction by 2030,” Kelley Kizzier, former EU climate negotiator and associate vice president for climate at EDF action, the advocacy partner for the Environmental Defense Fund, told Climate Home.

Climate observers anticipate Biden will try to present his plan around the third quarter of 2021 for a chance to leverage greater ambition from other large emitters, including China, ahead of the Cop26 summit.

Factcheck: Where are US emissions after four years of President Trump?

On the world stage, if Biden is to “lead a major diplomatic push” for raising climate ambition, he will have to work closely with the EU, China and the UK Cop26 host.

Outgoing president Trump’s dismissal of the climate threat gave cover to governments slow-walking climate action. By returning to the climate negotiation table, a Biden administration will expose the climate laggards. Australia, Brazil, Russia and Mexico are among those nations which could soon feel the heat.

The White House could also pressure China, Japan and South Korea to squeeze the finance pipeline for fossil infrastructure.

“There will be a more difficult relationship with China,” said Peter Betts, former EU and UK lead climate negotiator and an associate fellow at Chatham House.

He added the US and China may find a way to cooperate on debt, given the fact that China is now the biggest creditor in the world, or they may opt for a more combative relationship “where they both compete for international plaudits and influence in developing countries through climate action”.

In the run-up to the Paris Agreement, the US and China announced their emissions reduction targets together — a sign of Washington’s influence over Beijing. China’s net zero pledge in September sent a clear signal that Beijing is working closely with the EU and will not wait for the US to move forward on climate, Betts said.

With the EU, Biden could pave the way for cooperation on a global green recovery from the coronavirus pandemic, according to think tank E3G. His climate platform states that he will work with international financial institutions to provide “green debt relief” to developing countries.

“The biggest practical contribution Biden could make to Cop26 is to stop the US blocking new global funding for green Covid-19 recoveries at the IMF and World Bank,” said Nick Mabey, chief executive of E3G.

Biden said he would deliver $2 billion promised to the Green Climate Fund under the Obama administration, which Trump refused to pay. However that could be difficult if the Democrats fail to take control of the Senate, Alden Meyer, a long-time strategist on US and global climate policy, told Climate Home.