Wetter and hotter weather than usual is forecast until May, providing locust eggs with ideal conditions to hatch and grow. FAO says it is in a “race against time” 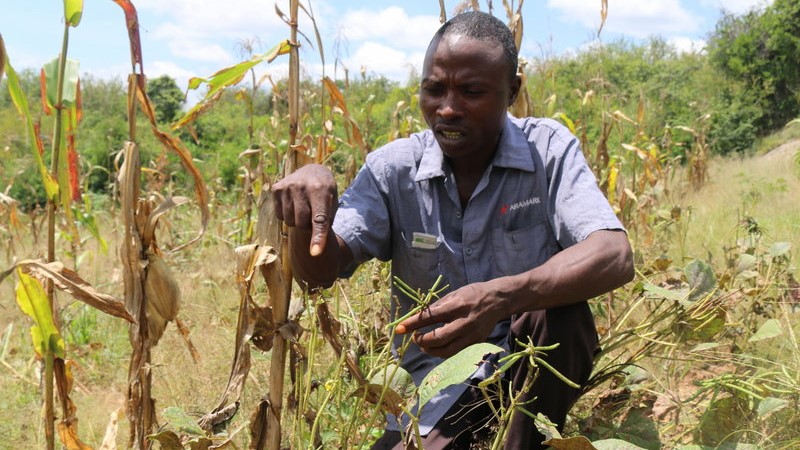 In late January, what seemed like a vast dark cloud approached Lawrence Mwagire’s farm in Njoga village in central Kenya.

“I said to my wife Daisy ‘this will be one heavy downpour!’ But to my surprise, within a few minutes, the cloud landed on trees, and a pink-red shade replaced the vast green scenery.”

“That is when we realised the dreaded locusts had made a landfall next to our farm,” the 40-year-old father of three told Climate Home News.

By morning, the trees had lost the top green leaves, and the swarm of locusts had started to devour Mwagire’s livelihood – cowpeas, green grams, maize and Khat on his three-acre farm in Embu county, about 155 kilometres northeast of Nairobi.

The plague dashed hopes for a good harvest after rains in November 2019 ended a prolonged dry spell in the arid region, where it hadn’t rained since May 2018.

“This was the best planting season we had for the last five years. I anticipated to harvest at least 280 kilograms of cowpeas, 560 kgs of green grams, and 250 kgs of maize before the invasion,” he said.

Mwagire, who had invested about Kshs 8,500 ($84.5) on cowpeas, maize, and green grams seeds said he lost all the cowpeas within three days. With his maize developing sudden rust, he only hoped to harvest at most 40 kilograms of green grams after the ordeal.

The Horn of Africa is suffering the worst desert locust invasion in decades, devastating pastoralists and farming communities in Kenya, Ethiopia, Somalia, Djibouti, Eritrea, and Uganda. South Sudan and Tanzania now are on the UN “watch list”. For Kenya, it is the worst infestation in 70 years and the worst outbreak in 25 years for Somalia and Ethiopia.

By January, data from the UN Food and Agriculture Organization (FAO) estimated nearly 110,000 hectares were affected by the desert locust crisis in the Horn of Africa.

FAO says that cyclones in May and October 2018 in the southern Arabian Peninsula caused heavy rainfall and gave rise to favourable locust breeding conditions in Yemen. Lack of control measures allowed three generations of breeding to migrate through Saudi Arabia, Iran, to the horn of Africa.

Since October 2019, east African countries have experienced exceptionally heavy rains and widespread flash floods attributed to the Indian ocean dipole – a climate phenomenon in which the western part of Indian ocean near the east African coast was warmer than the eastern part. 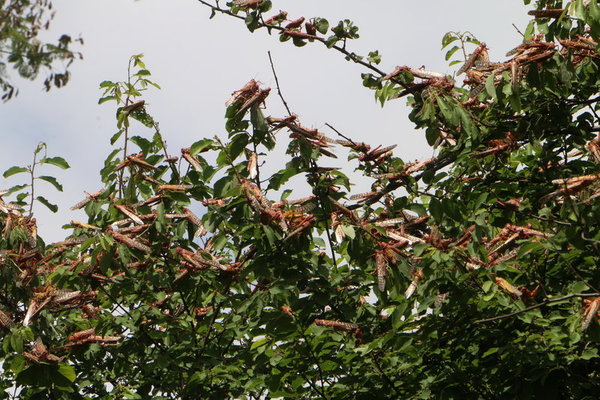 The Horn of Africa is suffering the worst  locust invasion in decades. Photo: Sophie Mbugua

Abubakar Salih Babiker, a climate scientist at the IGAD Climate Prediction and Application Centre (ICPAC), told CHN the Western Indian Ocean has warmed rapidly over the past 100 years and is the fastest warming part of the tropical ocean system, a trend linked to man-made global warming.

“October to December 2019 was the third wettest season in the past 30 years for the East Africa region. As a result, this heavy rainfall has resulted in increased green vegetation landscapes hence plenty of food for the locusts.

“The temperatures are warm aiding their egg hatching, and with the good winds, the conditions are suitable for their spread and movement,” Babiker said.

And the crisis is far from over.

ICPAC’s Fifty-Fourth Greater Horn of Africa Climate Outlook Forum predicts a wetter and hotter than usual March to May season in a wide area within the horn of Africa. Already the region is experiencing above-average rainfall during the summer season, which began in January.

And the rains complicate desert locust control as it is not suitable to spray insecticides during rains.

“Within the next three months, we could potentially have a 20 times bigger problem than we have now,” Ferrand said, given typical population growth if eggs hatch and the vast new generation of insects manages to find enough food and reproduce.

And in six months “we could have 400 times bigger swarms if we do not work on the control now,” he said.

Stephen Njoka, director of the Desert Locust Control Organisation for Eastern Africa, said one female could lay eggs three times, with each pond containing up to 100 eggs. “It is a big challenge as they are billion mobile swarms, some already laying eggs.” Njoka said female desert locusts can lay eggs at least three times in their lifetime, usually at intervals of about 6-11 days. 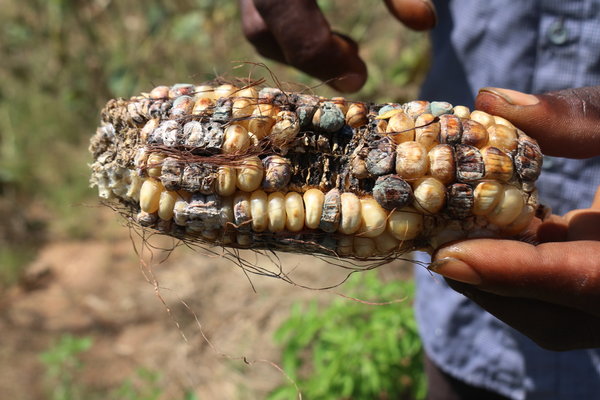 Lawrence Mwagire’s maize developed a rust after the passage of the locusts. Photo: Sophie Mbugua

Esbon Agira, a plant protection officer at the ministry of agriculture, livestock, and fisheries in Kenya, said the local monitoring team ministry has identified four areas in northern Kenya where the desert locusts have laid eggs – in Marsabit, Samburu and two spots in Isiolo.

Agira said controlling bands of young locusts, known as hoppers, will be easier as they do not have no wings for about two weeks. “But the challenge is identifying where the locusts are laying eggs.”

Ferrand admitted the desert locust mapping and monitoring in Kenya, Ethiopia and Sudan is currently “sketchy.” “The control operation is still to be improved as we do not have all the means to control, survey, and conduct ground monitoring, but we are building this capacity.”

Ferrand said FAO was working with countries and the Desert Locust Control Organisation for Eastern Africa to build capacity for on-ground monitoring teams. The teams require GPS radios to monitor and map the movement of the swarms of yellow-coloured mature insects, since the colour indicates the areas where they are likely to lay eggs.

But the biggest threat is yet to come, Ferrand warned.

“It is a race against time to have all the capacity in place to control the next generation of locust at the time the farmers are planting cereals in March and April. We are urging donors to allocate resources now instead of June,” he said.

Kenya has an on-ground monitoring team in every county, identifying and reporting the swarm activities. While the situation is mostly under control, according to Agira, incoming swarms from Somalia are a threat to efforts conducted so far.

“If there is still no control in Somalia and Yemen, new swarms and unidentified hatchings will continue being a significant threat,” he said.

FAO is requesting $76 million for Kenya, Somali, Ethiopia, Djibouti, and Eritrea. Ferrand said the figure will rise as more resources for controlling and supporting affected communities’ livelihoods will be required.

New breeding could worsen the food security current situation for Mwagire and about 13 million others in Somalia, Kenya, and Ethiopia who are currently critically food insecure.

For him, the locusts have dashed his hopes of buying two cows and nine goats to replace livestock he sold during the 2019 drought when he needed to raise money to pay his children’s school fees.

“I had planned to repurchase them with the harvest, but now I can’t. Instead of developing yourself, one keeps sinking into poverty,” he said.