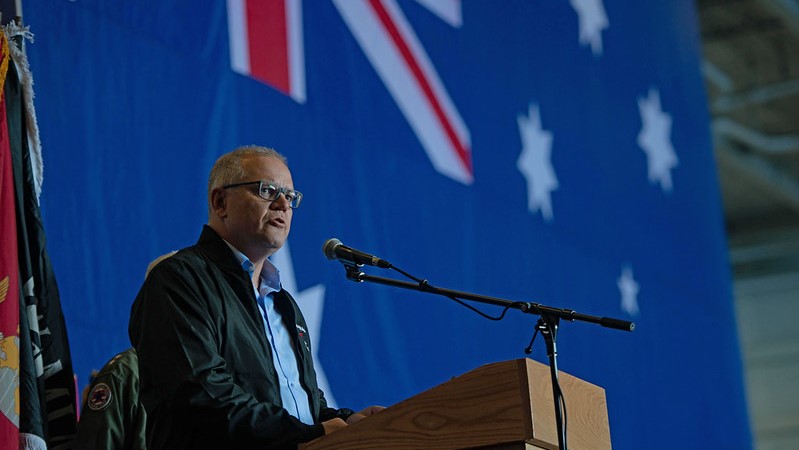 This week alone, Japan and South Korea committed to cut emissions to net zero by 2050 and the Philippines declared a moratorium on new coal-fired power plants. Last month, China promised to aim for carbon neutrality by 2060. A flurry of Asian investors have said they would no longer finance coal projects. It signals a shift away from coal in three of Australia’s four biggest export markets.

At home, every Australian state and territory has set a 2050 net zero target and public opinion is swinging in favour of a national target to match.

Polling by the Australian Institute released on Tuesday found 68% of Australians believe the federal government should set a net zero emissions target by 2050. Among Morrison’s base, 59% of respondents identifying as centre-right politically supported the goal.

On 9 November – the day the Cop26 climate talks were initially scheduled to start – independent lawmaker Zali Steggall is expected to table a Climate Change Bill, forcing a parliamentary discussion of carbon neutrality.

In 2018, Japan, China and South Korea together accounted for more than 55% of Australia’s total coal exports – worth a total of $31.4 billion, according to data from think tank Chatham House. Citing energy sovereignty, India, another top coal export destination, has also moved to reduce its reliance on imports.

“Australia is hyper-exposed to facing a remarkably difficult future as the rest of the world moves away from fossil fuels. Its fossil fuel exports now effectively have a time limit,” Tim Baxter, senior researcher at the Climate Council, told Climate Home News.

“The reality is that Australia needs to adopt a credible climate policy or be left behind,” he added – a warning Morrison has so far ignored.

“No I am not concerned about our future exports,” Morrison told reporters during a press conference on Wednesday.

“I’m very aware of the many views that are held around the world but I tell you what, our policies will be set here in Australia,” he added, commenting  on a phone call with UK Prime Minister Boris Johnson, who urged him to take “bold action to address climate change”.

The UK, set to host the next Cop26 climate summit in Glasgow next November, has made growing the number of countries committing to carbon neutrality by 2050 a key part of its diplomatic strategy.

“Looking ahead to the Climate Ambition Summit on 12 December and Cop26 in Glasgow next year, [Johnson] emphasised the importance of setting ambitious targets to cut emissions and reach Net Zero,” a UK government statement about the phone call said.

“For a while the Morrison government has been able to get a free pass on this because we have a climate denier in the White House and a number of big Australian partners were seen not to be in the most progressive camp on climate action,” said Thom Woodroofe, senior advisor to former Australian premier Kevin Rudd, who now leads the Asia Society Policy Institute.

But with three of Asian’s major economies committing to carbon neutrality and the prospect of Democrat Joe Biden winning the White House, Morrison has been left exposed.

“The risks of this isolation are not only economic,” Baxter said. “It also has consequences for our standing and influence in the international community. Australia has already seen its reputation in the Pacific take a battering.  Pacific Island countries are extremely vulnerable to climate change and are increasingly impatient with Australia for its lack of action.”

“The government is in a corner and doesn’t want to admit that it has put its bets on something that is fundamentally at odds with the direction of travel of the global economy,” Woodroofe added.

This week, ANZ Bank announced it will immediately stop funding new coal projects and cease lending to existing coal plants and mines by 2030 to focus on renewables, in direct response to China, Japan and South Korea’s net zero pledges. It is the last of Australia’s big four banks to move away from coal.

At the sub-national level, states have the power to “take extremely deep strides to reduce emissions, regardless of the federal government,” Baxter said.

In South Australia, the government retired all coal generation assets by May 2016 and moved from generating nearly all of its electricity from fossil fuels in the early 2000s to more than half from wind and solar in 2019.

The Australian Institute poll showed that 83% backed a coal phase-out and 59% supported investments in renewable energy as a pathway to economic recovery, with only 12% of respondents backing Morrison’s gas-led recovery.

Woodroofe said the Morrison administration could still present some form of long-term climate strategy before Cop26, outlining decarbonisation scenarios even if the prime minister is reluctant to commit to a target.

Doing so would “enhance Australian influence in the region, and especially among Pacific island states, where such an announcement would help secure Australia’s place as a partner of choice,” Wesley Morgan, adjunct research fellow at Griffith Asia Institute, in South East Queensland, told Climate Home.

With multi-billion-dollar projects slated for construction in Australia’s north to export solar energy and green hydrogen to major economies in Asia, “Australia is well-placed to reposition as a major exporter of renewable energy,” he added.