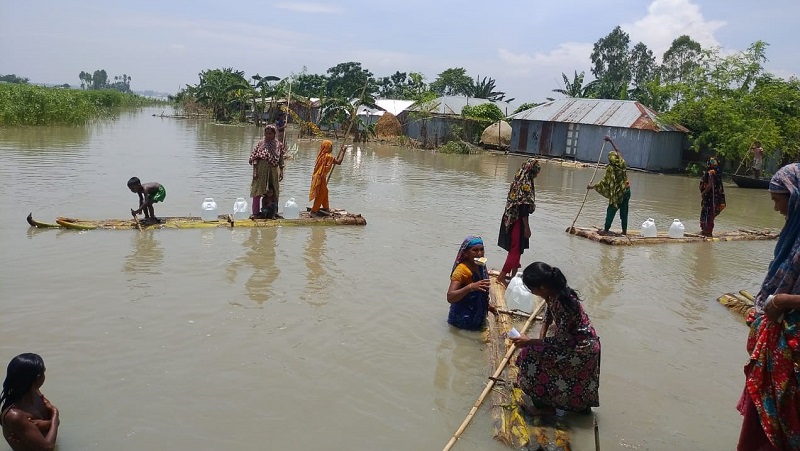 South Asia is currently facing what has been described as the worst monsoon season of the past decade: 17.5 million people have been affected by flooding in India, Bangladesh and Nepal, according to the Red Cross/ Red Crescent.

Millions of people are being robbed of their homes and livelihoods. What’s worse, these floods are happening in the midst of the Covid-19 pandemic.

Impacts of these combined crises re-emphasise the need for financing to address the residual, unavoidable losses and damages from climate impacts that are not being tackled through adaptation and risk reduction strategies alone.

Finance has been a key element in conversations about both climate change and Covid-19 over the past six months – conversations that coined the concepts of ‘green recovery’ and ‘building back better.’ In these contexts, finance has meant redirecting recovery investments away from carbon-intensive industries to promote greener, climate-compatible investments.

But these discussions ignore the fact that the impacts of climate change are already being felt by the poorest members of society, the people that extreme weather events impact most severely.

The current monsoons highlight that it is not enough to put money into ‘building back better’ – instead, developed countries need to mobilise additional finance to address the losses and damages that countries and communities are already facing as a result of climate impacts.

The combination of monsoon season, the pandemic and the resulting economic slow-down create ‘the perfect storm,’ in which the Covid-19 pandemic aggravates the impacts of flooding. As floods make homes inhabitable, people have to flock to ‘safe areas’– a movement in which it is nearly impossible to observe social distancing or basic hygiene measures.

These impacts not only make populations more vulnerable to both crises, but also aggravate existing inequalities. The destruction of homes and settlements increases the risk of the virus spreading in densely populated areas such as slums and refugee camps. And people are left worse placed to work and make a living for their families in a time when thousands have already lost their jobs due to the pandemic.

Communities in South Asia are thus being “sandwiched in a triple disaster of flooding, the coronavirus and an associated socioeconomic crisis of loss of livelihoods and jobs”, destroying crops and farmland and pushing people deeper into poverty, warns Jagan Chapagain, secretary general of the International Federation of Red Cross and Red Crescent Societies.

A case in point is India: it has the third highest number of cases, and the virus will likely spread further if more people have to pile in to temporary shelters when flooding forces them to flee their homes. In Pakistan, Karachi has seen the largest amounts of rain in August since records first started, risking further spread of the virus after numbers only just got under control in the country.

The floods are also increasing demand for health resources and hospitals that are already overburdened due to Covid-19.

Millions of people are gathered in confined spaces and temporary shelters, creating an ideal environment for the spread of not only Covid-19 but also mosquito and water-borne diseases. Because governments have to spend public resources on battling the pandemic, they have less money available to fight the spread of dengue and malaria amidst the floods.

In addition, the pandemic makes it harder for aid organisations to bring in food, water and medical supplies to flood-affected areas as vast regions remain in lockdown.

These impacts are occurring on top of Cyclone Amphan, which struck in the same region just a couple of months ago, deepening an already existing humanitarian crisis. The cyclone also revealed that it is the poorest and most vulnerable communities that suffer the most from the overlapping disasters of Covid-19 and extreme weather events, particularly in rural areas where the cyclone left fields saturated with saltwater and rendered them unsuitable for farming.

If countries like Bangladesh, Nepal or India are to be able to afford their own ‘green recovery’ from the combined losses and damages of Covid-19 and climate impacts, they need financial support. Covid-19 has left communities across the world homeless, unemployed and without social safety nets, thereby also reducing their ability to adapt to climate impacts and increasing their vulnerability to extreme weather events.

Without additional finance to address loss and damage, these communities will be left behind as the world spurs towards building back better.

Yet international climate finance to date has largely excluded any financing for loss and damage, beyond insurance schemes. This is because developed nations have blocked progress on the issue at UN climate negotiations: They have refused to accept responsibility for the climate implications of their fossil fuel extraction in order to avoid any liability and compensation claims.

But as a result, the existing ‘mechanism’ that is supposed to ‘address’ loss and damage has failed to mobilise finance and done little more than gather knowledge and encourage dialogue and coordination, according to least developed nations and small island states.

But there may be ways to mobilise loss and damage financing without assigning liability that are worth exploring.

For example, a loss and damage fund could be established within the UN climate process which would compel developed countries to pay in if they missed their emissions reduction targets. Rich countries could initially commit a small amount of finance to address damages that developing countries are already facing. Finance could be scaled up over time if developed countries do not meet their mitigation pledges under the Paris Agreement.

Such an approach would provide both immediate and long-term support to developing countries without getting into politically contingent questions of liability that have stalled progress in the past.

It would also hold reputational benefits for developed nations. Developed countries have committed to mobilising $100 billion of climate finance per year to address the needs of developing countries, but to date have been far from meeting this target.

Establishing a loss and damage fund would demonstrate that developed countries are serious about meeting this commitment. It could also lead to better international cooperation with developing nations, such as through strengthened trade relations.

Such a fund that is new and additional to existing finance for climate mitigation and adaptation would also send a strong signal to countries to increase and diversify their funding for climate-induced post-disaster recovery.

It will trigger essential conversations on the notions of vulnerability and climate justice, and will incentivise better attribution of disasters to climate change. And most of all, it will initiate conversations in which developed countries recognise their responsibility in the fact that climate change is already causing unavoidable damages.

Zoha Shawoo is a research associate at Stockholm Environment Institute.