Temperatures reached 38C in Siberia, leading to wildfires and increased melting of the sea ice and putting 2020 on course for 1.2C warming globally 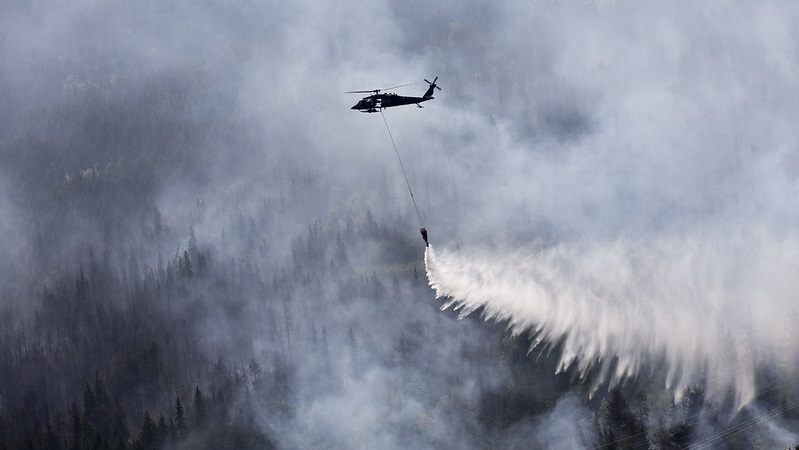 This year has seen large-scale wildfires in the US, Australia and Russia (Caption: National Guard)

A report by the United Nation’s weather agency has revealed how fast the world is heating up, leading ice sheets to melt, fish to die through ocean acidification and floods, storms and wildfires to worsen.

The World Meteorological Organisation’s (WMO) ‘state of the global climate’ report notes that levels of greenhouse gases in the air continued to grow despite the economic slowdown brought by the coronavirus pandemic.

Growth slowed but only slightly and temporarily and this slowing “will be practically indistinguishable” from normal year-to-year fluctuations, the report said, driving the “relentless march” of climate change.

The report reveals 2020 has so far been the second hottest year on record after 2016, around 1.2C hotter than the average year in the late 19th century.

“Record warm years have usually coincided with a strong El Niño event, as was the case in 2016. We are now experiencing a La Niña, which has a cooling effect on global temperatures, but has not been sufficient to put a brake on this year’s heat. Despite the current La Niña conditions, this year has already shown near record heat comparable to the previous record of 2016,” said WMO chief Petteri Taalas.

“This year is the fifth anniversary of the Paris Agreement on Climate Change. We welcome all the recent commitments by governments to reduce greenhouse gas emissions because we are currently not on track and more efforts are needed.” 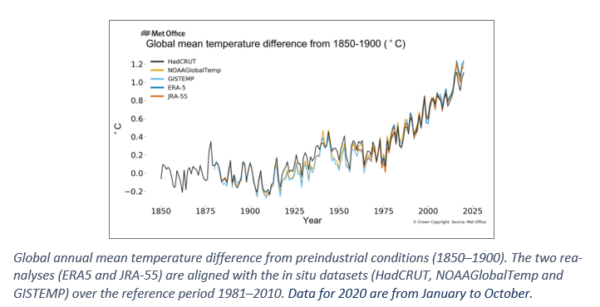 The decade from 2011 to 2020 has been the hottest on record and the last six years have individually been the six hottest ever.

The Arctic is heating up twice as quickly as the rest of the world, causing much of its ice to melt. The temperature reached 38C in Eastern Siberia in June 2020, the hottest Arctic circle temperature ever recorded. This heat caused the melting of sea ice to speed up in the East Siberian and Laptev seas and made Siberian wildfires worse.

The US states of California and Colorado experienced their largest fires on record and eastern Australia was hit too. Parts of Europe were unusually dry and there were droughts in inland South America and parts of Southern Africa.

Climate change makes heavy rain more likely and 2020 saw “well above average” rainfall in the Horn of Africa and the Sahel, where hundreds were killed in floods particularly in Sudan and Kenya. India, China and South-East Asia’s monsoon seasons were wetter than normal too.

The report described the North Atlantic hurricane season as “exceptionally active” with 30 tropical cyclones. This is more than double the long-term average.

During the first half of 2020, 9.8 million people were forced from their homes largely due to weather-related disasters. This number is in line with the average over the last decade.

These displacements were mainly in South Asia, South-East Asia and East Africa but also in Australia and the USA. Most of the people migrated inside their own countries.

The report said that the economic downturn and restrictions on travel from the coronavirus slowed down the delivery of aid to those hit by natural disasters like Cyclone Harald in the Pacific.