The UK will cut emissions 68% from 1990 to 2030, Boris Johnson announced, urging other leaders to bring new commitments to the 5th anniversary of the Paris Agreement 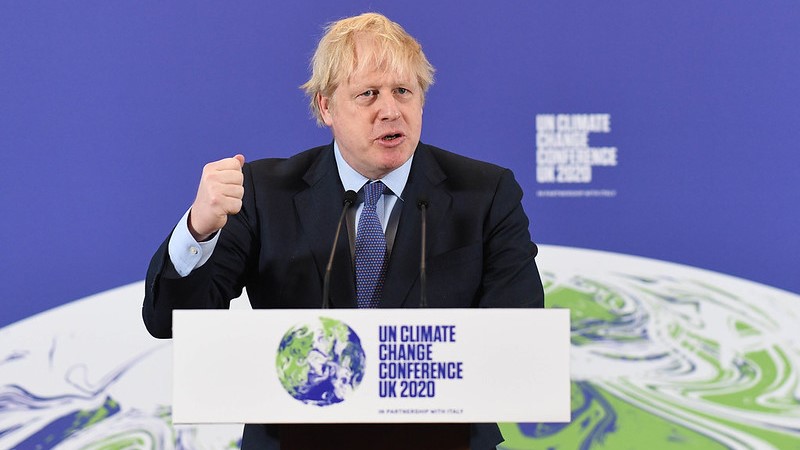 The UK government has announced it will slash greenhouse gas emissions at least 68% by 2030, compared to 1990 levels, in line with independent advice.

The prime minister accepted the Climate Change Committee’s recommendation on Thursday to set the target as its “nationally determined contribution” (NDC) to the Paris Agreement. It sets the UK on course to achieve its 2050 net zero goal and is significantly higher than its previous commitments.

“Today, we are taking the lead with an ambitious new target to reduce our emissions by 2030, faster than any major economy, with our Ten Point Plan helping us on our path to reach it,” Boris Johnson said in a statement.

Last month the government set out its long-awaited 10-point plan for a “green industrial revolution” and pledged to invest £12 billion to help the UK achieve carbon neutrality by 2050. Critics noted this was dwarfed by spending plans for road building and defence, and further policies would be needed to deliver the emissions cuts.

On Thursday, Lord Deben, chair of the Climate Change Committee (CCC), wrote in a letter to the UK’s business and energy minister Alok Sharma that a target of 68% or higher “would constitute a decisive commitment to a net zero emissions trajectory, consistent with the Paris Agreement.”

“It would place the UK among the leading countries in climate ambition,” Lord Deben said.

To achieve the goal, the CCC projects 43% of cars on UK roads should be electric and 87% of electricity come from nuclear or renewable energy by 2030. Next-generation technologies including carbon capture and storage, hydrogen fuel and carbon removal from the air are expected to contribute emissions reductions.

“The UK’s new emissions target is among the highest in the world and reflects the urgency and scale of the challenge our planet faces,” said Sharma, who is president-designate of next year’s Cop26 climate summit in Glasgow, UK.

“As a country, we have demonstrated we can both rapidly cut carbon emissions, while creating new jobs, new technologies and future-proof industries that will generate economic growth for decades to come.”

As host of Cop26, the UK set the ball rolling ahead of a virtual ambition summit it is co-hosting with the UN and France on 12 December to mark the fifth anniversary of the Paris Agreement. The UK has asked governments to present tougher commitments on reducing emissions, adapting to climate impacts and boosting climate finance at the summit.

“This is a global effort, which is why the UK is urging world leaders as part of next week’s Climate Ambition Summit to bring forward their own ambitious plans to cut emissions and set net zero targets,” Johnson said.

China, South Korea and Japan have all announced long-term net zero pledges in the past three months, but have yet to come forward with strengthened 2030 goals.

“International attention now turns to the United States, China and other major economies to take similar steps by Cop26,” said Laurence Tubiana, one of the architects of the Paris Agreement and CEO of the European Climate Foundation.

Incoming US president Joe Biden has made climate action a priority for his administration, mentioning it in every call he has had with world leaders since his election victory. However he faces a challenge to deliver credible climate commitments after his Democratic party failed to win a Senate majority.

The UK announcement comes ahead of the European Council meeting next week when EU leaders are under pressure to agree on a goal of cutting emissions by at least 55% by 2030, compared to 1990 levels, up from 40% currently.

“Failing where the UK has succeeded would be hugely embarrassing internationally, and a significant setback to the EU’s aspirations for its Green Deal. As a neighbouring country facing similar challenges with the net zero transition, the UK’s commitment should give EU leaders a boost of confidence to adopt the 55% target without hesitation,” said Mabey.

Climate campaigners welcomed the news, urging the UK government to put the ambition into action as quickly as possible.

“Given the urgency of the climate crisis and the rapid advances in zero carbon solutions, ambition can be pushed even higher over the next decade,” said John Sauven, executive director of Greenpeace UK. “The government must now increase the action needed to cut emissions from our homes, roads, farms and power sources in the UK.”

“For people living in the vulnerable places of the world who are dealing with the impacts of climate change, we want to see not just emissions cuts but also support for those already suffering. The Paris Agreement stipulates that these national pledges should cover both areas and so for the UK to be a credible host of next year’s meeting they need to announce how they plan to support the vulnerable. Until then this is only half a plan,” he said.