Experts are calling for relief and resilience funding for Nicaragua and Honduras, as warming seas fuel extraordinarily intense storms 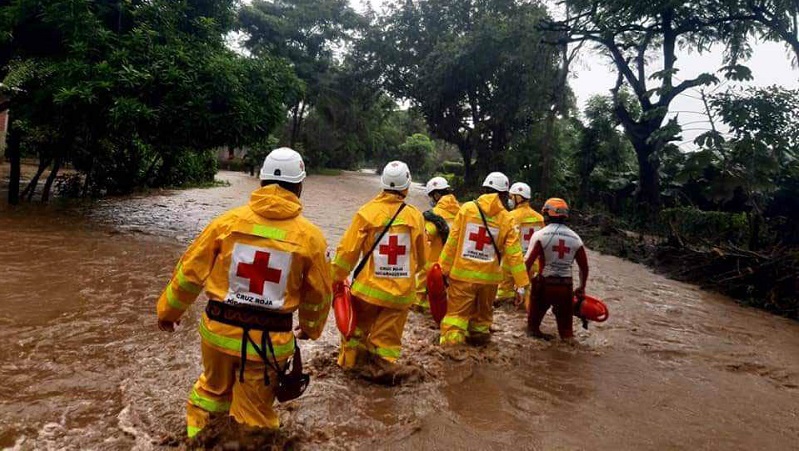 Just weeks after Hurricane Eta devastated swathes of Central America, another fierce hurricane has killed several people and forced thousands of others to flee their homes.

This year has brought more storms strong enough to be named than any other since records began. It is the first year in which two hurricanes have formed in the Atlantic in November, past the storm season’s peak.

Experts said rising sea temperatures linked to climate change had contributed to the hurricanes’ strength, along with factors like the La Nina weather phenomenon. US president-elect Joe Biden linked climate change to the “increasing frequency of these powerful storms”.

I’m keeping in my prayers all of our friends and neighbors in Hurricane Iota’s path and those impacted by Hurricane Eta across Central America. The increasing frequency of these powerful storms is another reason that fighting climate change will be one of my top priorities.

Before hitting Nicaragua on Monday evening and killing at least six people, Hurricane Iota devastated the small Colombian island of Providencia off the Nicaraguan coast with wind speeds up to 160 miles per hour (260kmph). Colombian president Ivan Duque said that two people have died and one is missing.

Alicia Fernandez is an environmental advocate and professional in California with many relatives in Providencia. She told Climate Home: “There was not one home that was unaffected. Every single house on Providencia was affected by the hurricane. As of now, it’s not liveable. They’re evacuating everyone to Saint Andres [a nearby Colombian island].”

She added: “My dad came in his twenties to California to make a better life for himself and our family. He finally finished constructing our house [in Providencia] about four years ago and now this. He worked his whole life to build that house and we are not sure how much of it is still standing.”

“This is all climate change,” she said. “This is all due to huge countries like the US, like Europe, like China, starting back from the industrial revolution emitting greenhouse gases. Natural disasters are just going to become more frequent and more extreme as developed countries continue to emit. The ones who are most highly affected are the developing ones like Providencia, Nicaragua and Honduras who don’t have the resources to be able to withstand this type of damage.”

In the short-term, she said the islanders need food, water, clothing as they “have nothing” and their homes must be rebuilt. Eco-tourism is its main source of income and that infrastructure needs to be rebuilt, she added. “I hope that we can get support from other developed nations and organisations who value and have an interest in our climate crisis and helping people who’ve been affected.”

After hitting Providencia, the hurricane continued towards Nicaragua, reportedly killing six people, displacing 62,000 and affecting 400,000 in the same part of the country which was hit worst by Hurricane Eta.

Anaitee Mills is a World Bank climate change and disaster risk consultant. She is originally from Guatemala and now working on Jamaica’s climate policy. She tweeted that vulnerable countries need to “urgently step up in early warning systems and resilience building. Today is Providencia and Nicaragua… tomorrow could be us!”

When asked if the international community and developed countries should do more to help, she agreed. “But it’s important to emphasize that this is not a one man show, we need to get all hands on deck. Political and local leadership is key to mobilize the technical and financial support of donors,” Mills said.

Carlos Manuel Rodriguez is head of the Global Environment Facility and a former energy and environment minister of Costa Rica. He tweeted: “My heart are with my Nicaraguan and Honduran brothers. Two huge hurricanes in the last two weeks. Forests fires, pandemic and now hurricanes are not just hallmarks of a bad year. Welcome to the Anthropocene!” He added that Central America should invest in increasing forest cover to become more resilient to hurricanes.

After two huge hurricanes in Central America the country with the highest forest cover overcomes better the impacts and has less economic damages . The region has lost 20% of its forests in the last 20 years. We need to invest in climate reliance: nature base solution! pic.twitter.com/IOXlpnP99x

Liz Stephens is a natural disaster expert at Reading University. She told Climate Home: “This Atlantic hurricane season has seen a record number of named tropical cyclones, and Iota is the most intense to develop so late in the season. We are currently experiencing a La Niña event which is known to increase the likelihood of storms forming in the Atlantic, but warmer sea temperatures as a result of climate change are expected to drive more intense storms with stronger winds and higher rainfall totals.”

Chris Holloway, a meteorology professor at Reading University, said the Caribbean sea was around 1C warmer than normal before hurricane Eta. This is “significant” and “there were still slightly above-average sea temperatures in the greater Caribbean region when Iota was intensifying, which likely contributed to its rapid intensification,” he said.

Climate change makes the probability of very strong cyclones, like Iota, higher in general, although there is still scientific debate about how much this probability is expected to increase, Holloway said. Scientists are most confident that climate change will affect hurricanes in three ways. First, sea level rises make storm surge from any cyclone more dangerous. Second, storms will be rainier since warmer air can hold more water vapour. Third, storms will shift towards the north and south poles.

Ilan Kelman is a professor of disasters and health at University College London, stressed that poverty and inequity were what made people vulnerable to these “un-natural” disasters. “Irrespective of how human-caused climate change is affecting hurricanes, Central America does not need to have hurricane disasters, if vulnerabilities are fully tackled.”