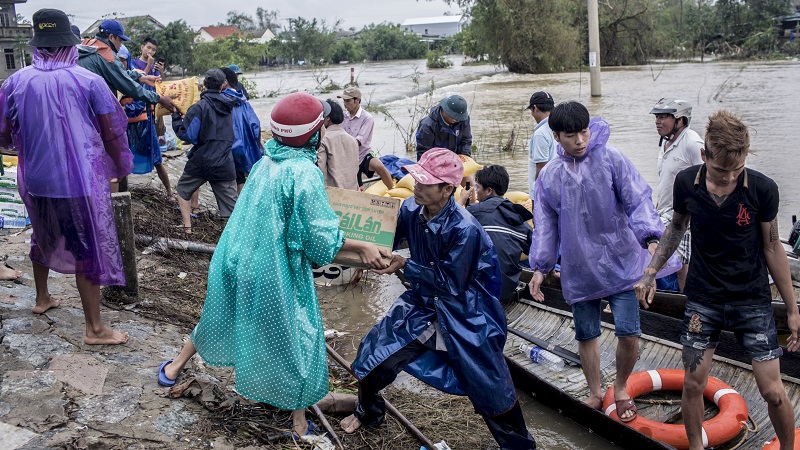 Vounteers deliver aid packages to residents affected by heavy flood in Quang An Commune, Vietnam, where families have struggled to access food and supplies due to heavy floods (Photo: Yen Duong for IFRC )

Vietnam is being hit by the most intense series of tropical storms in decades, putting millions of people at risk of losing their homes and livelihoods.

Typhoon Molave is expected to make a landfall with a force equivalent to a category 3 hurricane in the central region of Vietnam on Wednesday morning local time. It is the fourth tropical storm to batter the southeast Asian country since 11 October and the ninth since the start of the year.

The series of unusually close and intense storms has caused devastating flooding and landslides across Vietnam’s central region.

As of Tuesday, 130 people were reported to have died, 18 people were missing and nearly 300,000 homes had collapsed or were damaged by flood waters, according to local assessments by NGOs and UN agencies.

While rescue operations and clear-ups from the floods haven’t finished, the provinces of Quang Ngai and Da Nang are bracing for another hit as Molave makes its way from the Philippines across the South China Sea.

“Molave is expected to be the strongest and deadliest storm to hit Vietnam this year… and one of the most serious storms we have seen in years,” Nguyen Hai Anh, vice president and secretary general of Vietnam Red Cross told Climate Home News.

“We are very concerned about the safety of people as many have lost their lives and livelihoods in the floods and communities have had no time to recover.”

Climate projections in the region forecast the intensity of typhoons to rise, the frequency of extreme rainfall events to increase causing flash floods and landslides, and the rainy season which usually runs from August/September to December to lengthen.

“Vietnam is a country that is used to regular floods and hurricanes, but this month’s rainfall levels are extraordinary and it will go down as one of the most devastating seasons in the past few decades,” said Pamela McElwee, professor of human ecology at Rutgers University, New Jersey, who studies environmental issues in Vietnam.

This series of back-to-back intense storms all hitting the same region in the central part of the country is particularly unusual, she told Climate Home. 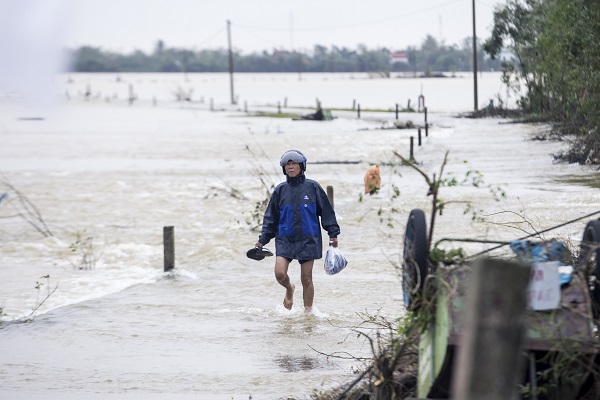 A resident walks through the floodwater to a pickup point for relief packages in Quang An Commune, Thua Thien Hue, Vietnam. (Photo: Yen Duong for IFRC )

Typhoon Molave will add stress to an area already saturated with “excess flood waters” and things “will get worse,” she added.

With winds of up to 150 km/h expected, houses, school buildings, hospitals and offices that withstood the first three storms are at higher risk of collapse.

Nearly 15,000 hectares of agricultural land have so far been damaged by the floods and more than 767,000 livestock have been lost.

Although most of the rice cultivated in the region was harvested before the storms, huge quantities of rice, maize and cassava flour stored in homes have been destroyed.

“At least 150,000 people will need food assistance in the next six months,” Tran Manh said.

And while reported Covid-19 cases have been low in the region, a flow of evacuees into neighbouring Laos heightens the risk of new infections. 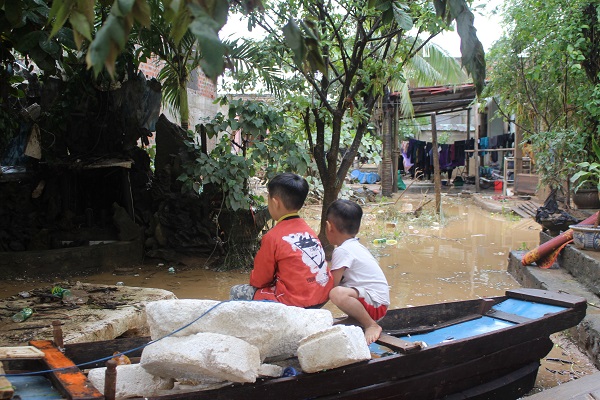 It could take the central provinces “years to recover,” Hai Anh said, with UN agencies and Vietnam’s national disaster and management authority estimating the damage before the Molave typhoon at $45-50 million.

Mai Van Khiem, director of Vietnam’s National Center for Hydro-meteorology Forecasting, has compared Molave with typhoon Damrey that hit the country in 2017, killing more than 150 people and cost more than $1bn in damage.

The Vietnamese government has allocated 500 billion VND ($21.6 million) to support the relief and recovery efforts in five affected provinces. UN agencies and the Asian Development Bank have provided more than $3 million in aid but humanitarian organisations say more international support is needed.

McElwee said climate projections highlighted how difficult it would be for Vietnam to adapt to longer and more intense storm seasons. The densely populated and narrow central coast of the country is wedged between mountains and the sea with “nowhere for excess water to go,” she said.

In the climate adaptation plan Vietnam submitted to the UN last month, the government said the nation was “facing loss and damage from climate change which are beyond the country’s ability to cope with even when climate change adaptation and mitigation measures are effectively applied”.

Between 1995 and 2017, damage caused by extreme weather events cost the country an average of $1bn a year and increased 12.7% annually. Most of the losses were caused by damage to rice production.

The government said national resources only meet about 30% of the financial need for climate adaptation, with estimated costs to exceed 3-5% of the country’s GDP by 2030 and reach $35 billion over the next decade.