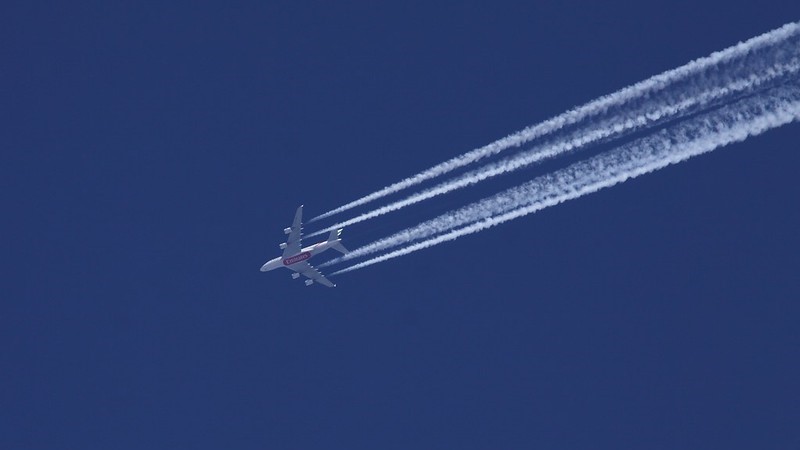 The contrails left behind an Airbus A380 (Photo: Dean Morley/Flickr)

The European Union has been urged to take action on the non-carbon emissions effect of air travel, in light of research published this week.

The aviation sector’s climate impact is three times bigger than the effect of its carbon dioxide emissions alone, according to a study by the European Union Aviation Safety Agency (Easa), the EU’s aviation regulator, commissioned by the European Commission.

The study endorses findings published in the journal Atmospheric Environment, showing that non-CO2 emissions from planes such as of oxides of nitrogen (NOx), soot particles, sulphate aerosols, and water vapour at high altitude together drive significant global heating.

The EU estimates direct carbon emissions from aviation account for nearly 4% of the bloc’s total CO2 emissions. But when considering non-CO2 emissions, aviation is likely playing a much bigger role in the EU’s contribution to rising temperatures globally.

Campaigners at Transport & Environment (T&E) say the study is an acknowledgment by the European Commission that the aviation sector’s full impact on warming needs to be addressed — 12 years after it started to consider the issue.

“It confirms that carbon emissions are only the tip of the iceberg when accounting for aviation’s climate impact,” said Jo Dardenne, aviation manager at T&E. “It’s the first time the EU regulator addresses the issue.”

While collectively planes’ non-CO2 emissions have a net warming impact on the planet, individually they have varying warming and cooling effects, the extent of which remains uncertain. The mass grounding of flights during the coronavirus pandemic handed scientists a rare chance to study plane-free skies and understand how far aviation stokes global warming.

In a note to the EU Parliament accompanying the report, the Commission stated the study “fully confirmed” previous estimates that non-C02 impacts were “at least as important” as CO2 emissions in contributing to warming.

It added the findings “needed to be addressed” in line with the EU’ climate objectives but it stressed that “the complexity of non-CO2 climate impacts relative to CO2 ones and the trade-offs between various impacts, poses a challenge” to policy responses.

Potential policy measures  included the creation of a levy on planes’ NOx emissions and the possible inclusion of these emissions under the EU’s trading scheme. The mandatory use of sustainable aviation fuel and operational measures, such as optimising flight trajectories to avoid the formation of contrails, were also recommended.

These measures would take at least five to eight years to be implemented if “there is political will”, the report said.

Dardenne told Climate Home the EU could not afford to wait eight years to act on the issue and urged the Commission to include policies in its Sustainable and Smart Mobility Strategy, due next month, which will set its vision for the transport sector for the next decade.

The Commission, she said, “shouldn’t waste any more time in implementing the solutions that are available today”.

Bill Hemmings, an independent consultant based in Brussels, said the Commission’s three-page note to Parliament and emphasis on the complexity of the sector’s climate impact was “yet another example of policymakers seeking to avoid acknowledging a very inconvenient truth”.

“It would be foolish not to recognise that the issues around aviation’s climate impacts at altitude remain complex and uncertain,” he said, but “there are strong arguments now to advance this work as quickly as possible… despite many lost years.”

The latest report is nearly a year late. The Commission was expected to present aviation’s non-CO2 effects and possible policy measures to address them by January 2020, in response to pressure from European lawmakers to reflect the aviation’s full climate impact in the emissions trading scheme.

This was not the first time the European Parliament had pressed the Commission on the issue.

In 2008, it led to the publication of a study commissioned by the EU Commission’s transport department exploring policy options to reduce the climate impact of NOx emissions. The study made six policy recommendations but concluded three to five more years of research were needed to strength the scientific understanding.

Hemmings accused the Commission of having left the 2008 report to “gather dust on a shelf”.

He called on the EU to reflect aviation’s full warming impact in its greenhouse gas emissions inventories, to inform how much action the EU needs to take to achieve its 2050 climate neutrality goal.