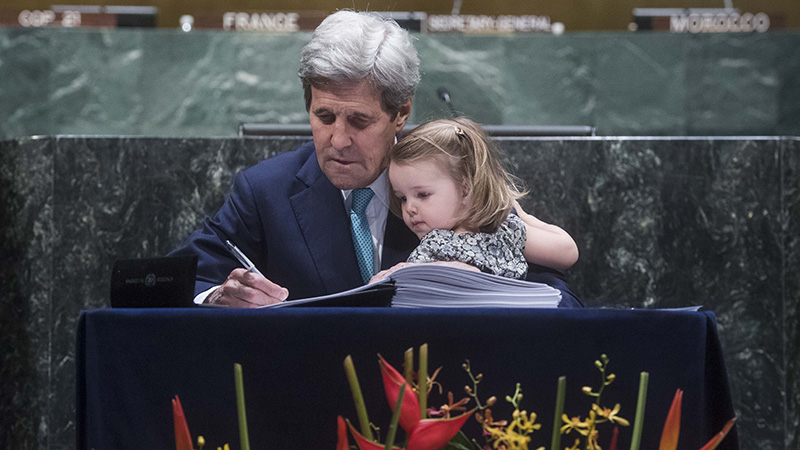 Kerry, who signed the Paris climate Agreement on behalf of the US in 2016, will work to address climate change at home and abroad full time as part of Biden’s new administration and will sit on the National Security Council as the first official dedicated to climate action.

“America will soon have a government that treats the climate crisis as the urgent national security threat it is,” Kerry said in a tweet following his announcement. “I’m proud to partner with the President-elect, our allies, and the young leaders of the climate movement to take on this crisis as the President’s Climate Envoy.”

As secretary of state during president Barack Obama’s second term, Kerry played a key role in securing the Paris deal. He worked with his Chinese counterpart to agree on a carbon-cutting deals between the two nations in 2014 that underpinned the signing of the accord a year later.

Kerry’s appointment comes as Biden promises to revive key alliances and re-engage on the global stage by leading “a diplomatic push” for climate action after four years of retreat under president Donald Trump.

Biden has pledged to rejoin the Paris Agreement on his first day in office and, in an early indication of his commitment, mentioned climate change in every single call he has had with world leaders since he emerged as the winner of the 3 November election.

Importantly, Kerry is no stranger to the very top of the Chinese government. He met president Xi Jinping in 2014 during a six-day visit to advance collaboration on climate action between the world’s two largest emitters.

US-China relations have seriously deteriorated in recent years and Biden campaigned with tough talk on holding China accountable for its pollution. However Kerry’s appointment recalls an era when climate was a point of cooperation between Beijing and Washington, even as they clashed on issues such as human rights and the militarisation of the South China Sea.

“There is muscle memory at the very top level of of both countries [on climate cooperation],” Li Shuo, senior climate and energy policy officer at Greenpeace China told an event hosted by China Dialogue last week. “That could make a lot of things possible,” he said, adding creative diplomacy would still be needed.

On Monday, the Biden transition team also announced Antony Blinken, a long serving diplomat and close aide to the president elect, will serve as secretary of state — one of the US administration’s most powerful jobs.

“We have no time to lose when it comes to our national security and foreign policy. I need a team ready on Day One to help me reclaim America’s seat at the head of the table, rally the world to meet the biggest challenges we face, and advance our security, prosperity, and values,” said Biden in a statement.

The three men’s approach to climate diplomacy will influence next year’s Cop26 climate talks in Glasgow, UK, to which leaders are expected to bring more ambitious commitments.

Cop26 president-designate Alok Sharma, also the UK’s business minister, welcomed the news of Kerry’s appointment within minutes of the announcement.

Kerry and Blinken are expected to integrate climate change into every aspect of US foreign and national security strategies.

Blinken has worked alongside the president-elect for nearly 20 years and is sometimes referred to as Biden’s “alter ego”.

While not a household name, Blinken has 25 years’ experience in diplomatic engagement and alliance-building. He served as deputy secretary at the State Department – the US’ second top diplomat – during Barack Obama’s second term when he oversaw the fight against the Islamic State, the rise of Asia as an economic and strategic power and the global refugee crisis.

Blinken was involved in the US diplomatic efforts ahead of the Paris summit, meeting French foreign minister and president of the Cop21 climate talks Laurent Fabius and China’s then foreign minister Wang Yi.

On the global stage, his engagement with Asian powers will be critical. Blinken described relations with China as “arguably the biggest challenge” the US faces from another nation which as “adversarial” and “competitive aspects” but also “cooperative ones” including climate change, nuclear non proliferation and global health.

In August, he celebrated the anniversary of the Association of the Southeast Asian Nations (Asean) – which he described as “essential to tackling major challenges like climate and global health”.

“President Biden will show up and engage Asean on critical issues of common interest,” he added.

Speaking to CBS News’ Intelligence Matters podcast in September, Blinken said the Trump administration had seen an “under-reliance on… diplomacy” which would become “our tool of first resort” under a Biden administration.

He described the State Department as currently “demoralised and decimated” by departures and vacancies in senior ranks and said Biden would reform the American diplomatic corps to make it “more strategic, more modern, more agile, more effective”.

A Biden administration would fully integrate climate change into foreign policy, national security and trade, “but you’ve got to bring the domestic and the international piece together if you’re going to succeed,” he said.

“Success can breed success and strengthen our credibility. When we’re actually modelling good behaviour, and when we get results, other countries are more likely to follow our lead.”

Another of Biden’s close aides, Jake Sullivan, has been named national security adviser and Linda Thomas-Greenfield, a foreign service veteran, as US ambassador to the UN.

Rachel Kyte, dean of the Fletcher School of Law and Diplomacy at Tufts University and former UN clean energy chief, described the appointments as “all beyond qualified” and signalling “the return of diplomatic tradecraft to affairs of state — bilateral and multilateral”.