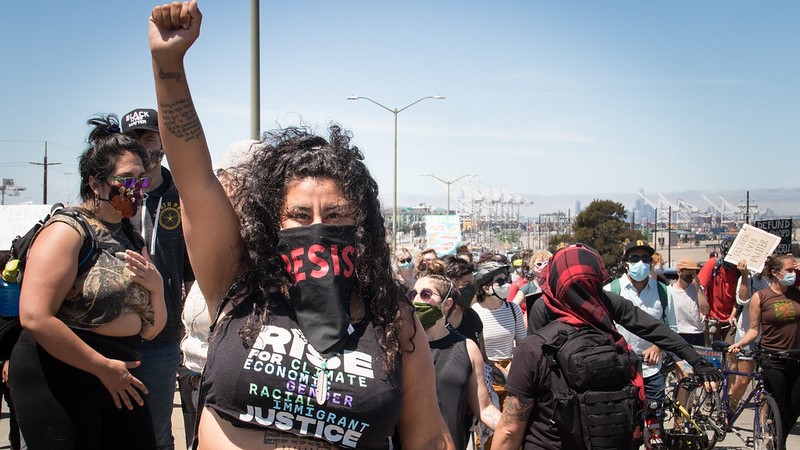 A women protesting in Oakland on Juneteenth, which commemorates the ending of slavery in the United States (Photo: Peg Hunter/Flickr)

When Chevron’s name was accidentally included at the bottom of a PR push accusing white climate activists of hurting black communities by promoting radical climate policies, it gave a glimpse of the dark arts of oil lobbying.

The campaign, by a communication firm working for Chevron, exploited a wave of anti-racism protests gripping America to fight plans for a Green New Deal. Chevron and communication firm CRC Advisors denied to E&E News the oil company was involved.

Whatever the motives, the message hit on an uncomfortable truth: The US climate movement’s whiteness is a weakness.

Inside the climate movement, change is starting to happen. In 2019, 15 members of the US Climate Action Network came together to discuss how they could create a large-scale movement to address the magnitude of the climate crisis, taking inspiration from past successful protest movements.

African Americans have every reason to be concerned about the environment, having long been disproportionately affected by pollution and climate impacts – including from the oil industry.

In Richmond, California, a city with large Latinx and African American populations, a Chevron oil refinery is one of the sources contributing to some of the worst air pollution hotspots in the San Francisco bay area.

That makes residents vulnerable to health problems, not least from the novel coronavirus pandemic. Researchers have established a link between long-term exposure to PM2.5 pollution and higher Covid-19 death rates.

The money raised by the scheme funds California’s clean energy transition, while a share is redirected to provide affordable housing and clean water in the state’s most vulnerable communities. But Yoshitani said the scheme was “trading communities’ health for money” and perpetuated racial inequality.

“The need for racial and economic justice to be at the heart of our work has been obvious for communities of colour for a long time,” Keya Chatterjee, executive director of the US Climate Action Network, told CHN.

“The climate movement being mostly white has been a hindrance in making progress. We cannot win in this way.”

Jacqueline Patterson, director of the environmental and climate justice programme at the National Association for the Advancement of Coloured People (NAACP), told CHN mainstream environmental groups had failed to fully address the economic injustices faced by fossil fuel workers and had involved black people in a tokenistic way to please funders.

“It’s never been about racial justice,” she said. And yet, the most successful climate campaigns in the US have been those supported by the broadest coalitions.

“It is critical that those pushing for clean air standards also push for re-imagining law enforcement budgets,” Patterson added in a reference to “defund the police”, a rallying cry at anti-racism demonstrations. “We have to get out of the siloed approach.”

In the middle of the pandemic, members of US Climate Action Network launched Arm in Arm, an initiative to organise communities across the US by addressing economic and racial justice. The campaign uses direct action to disrupt systems identified as “oppressive” and provide vulnerable communities with what they most need, such as food, clean air and water.

This, they say, creates an opportunity to start a conversation about climate change and its impacts.

“Those with access and resources have been focused on solar panels and polar bears for way too long,” said Lindsay Harper, national coordinator of the campaign, called Arm in Arm.

The civil disobedience tactics of climate movements like Extinction Rebellion can also be offputting to marginalised communities. Given high levels of police brutality against black people and the mass incarceration of African Americans, the stakes of a confrontation with the police are too high for some.

“I am a black woman and I don’t do protests. I don’t put my body on the line,” Harper told CHN. “But there is equity in protest and taking to the streets is not the only way to create disruption.”

Comment: Now is the time to climate-and-pandemic-proof our food systems

In the US, an estimated 26% of African Americans live in food-insecure households – a trend exacerbated by the pandemic.

“It would allow us to start a conversation about access to food while creating a small economy and our own system,” Harper said.

In the state of Utah, campaigners planted fruit trees in places where communities lacked access to healthy food. In Washington DC, activists shut down streets to create socially distant outdoor spaces, allowing people to exercise outside.

Patterson of NAACP said such a campaign was long overdue and “had the potential to make major strides”.

“In the context of America, the strategy that Arm in Arm puts forward is timeless. What has been going on [in recent months] has always been going on in one way or another,” she said.

Chatterjee said the campaign was not designed to recruit members of existing environmental networks but rather to target millions of American adults who are involved in their communities and may have never attended a climate protest before.

By 2022, campaigners hope up to 11 million people can participate in sustained non-violent action such as marches, demonstrations, boycotts, and mass work stoppages. That’s the equivalent of 3.5% of the American population – the threshold for sustained public participation in protests that leads to serious change, according to some research.

Chatterjee said creating this “huge surge in public opinion” for climate policies could be done fast at the right moment in time.

The uprising that followed the killing of George Floyd “wasn’t spontaneous,” she said. “It happened because of years and years of successful planning, mobilising and education. The movement was prepared for that moment.”

When it comes to climate action, “we can move public opinion really fast with smart organising.”