For all its green talk, the IEA still gives comfort to oil and gas producers

Under Fatih Birol, the International Energy Agency leads talk of a green recovery, yet dodges hard questions about phasing out dirty energy 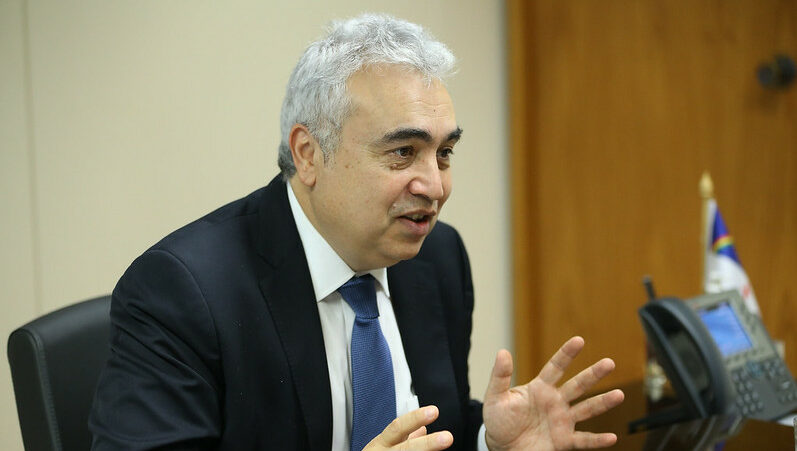 When oil major Total announced it had raised finance for a $20 billion project to exploit Mozambique’s gas reserves, it faced criticism for undermining international climate goals.

In its climate strategy, Total cites the IEA’s most “sustainable development scenario”, which sees methane gas consumption soaring between now and 2040 to meet a quarter of global energy demand.

Gas, Total insists, “is the best option currently available for combating global warming”. This is just one example of how oil and gas companies use IEA forecasts to justify investments in fossil fuels.

Under the direction of Turkish economist Fatih Birol, the agency has become increasingly supportive of clean energy. Yet it continues to appeal to its oil-producing funders, ducking hard questions about the endgame for dirty energy.

“The IEA is an organisation that was set up and designed for a different era and it needs a radical transformation if they are still to have relevance in the modern era,” Kingsmill Bond, an energy strategist at Carbon Tracker, told Climate Home News.

With a reputation for having excellent analytical skills and a deep understanding of the energy system, the IEA could be repurposed to show the full cost of fossil fuels and drive the energy transition, Bond said. That would be “a game-changer”.

The Paris-based energy agency was established in the wake of the 1973 oil crisis to ensure the security of oil supplies. Oil security remains central to the IEA’s mission. It is best known for its in-depth analysis and data on the energy market, which provides reference material for companies and governments alike.

The coronavirus pandemic confronted the IEA with the opposite problem: over-supply. The price of oil tumbled and even turned briefly negative in the US, as demand collapsed – a foretaste of shocks that could be in store if and when action to cut emissions accelerates.

As lockdown measures to contain the pandemic started to take a toll on the economy, Birol led the narrative on putting clean energy at the heart of stimulus packages. In an interview with Climate Home News in March, he said recovery packages offered governments “a historic opportunity” to accelerate the clean energy transition.

The IEA then set out its vision for a sustainable recovery in a special report last month, providing governments with a guide for how short-term energy investments could reboot the economy and create jobs while cutting emissions.

It’s a message many leaders have yet to heed. Major economies in the G20 have so far spent more recovery money supporting fossil fuels than clean energy, according to initial findings of the Energy Policy Tracker launched by 14 research groups earlier this month.

Speaking to CHN this month, Birol said the first tranche of recovery money had been focused on “creating firewalls around the economy, helping businesses and maintaining employment”. He expected stimulus in the second half of the year to focus on renewable energy, energy efficiency for buildings and the modernisation of power grids.

“Even countries that do not put climate change as a key priority in their political agenda need to focus on these energy policies because they will boost economic growth and create jobs. Energy efficiency is a job machine – it is very labour intensive and it will reduce emissions,” he said.

Long read: This oil crash is not like the others

Notably absent from the IEA’s “sustainable recovery” report is any reference to the temperature goals of the Paris Agreement. Under the pact, governments aim to hold global warming “well below 2C” and aim for 1.5C, the tougher target seen as critical to the survival of some vulnerable nations.

Oil Change International said this reflected a chronic failure of climate ambition at the agency. “Given the IEA’s rhetoric and calls for leadership, omitting 1.5C is a pretty significant oversight,” said campaigner Hannah McKinnon.

Then there is a certain evasiveness around what those goals mean for fossil fuels.

On the “mission” page of its website, the IEA says it takes an “all-fuels, all-technology approach”.

In November 2017, the IEA launched a Clean Energy Transition Programme to support clean energy deployment in emerging economies such as Brazil, China and India.

A few months earlier, Birol told an oil and gas conference in the US: “Our message to the oil industry here in Houston is invest, invest, invest”.

At the World Energy Forum this year, Birol called for “building a grand coalition” to bring down global emissions. He later said 2020 was “the year for the clean energy transition“.

In May, he told an online energy event: “I don’t think it’s the end of oil yet. We still need oil for years to come,” citing ongoing demand from the transport and petrochemical industries.

“There is a strong rhetoric and desire by the IEA to lead on [the clean energy transition],” said Peter Wooders, senior energy director at the International Institute for Sustainable Development (IISD). “But the agency hasn’t always provided all the tools and clear signalling of the way forward…

“By sitting on the fence and backing all forms of energy, there is a danger that they will perpetuate the unsustainable pathway we are on rather than showing what could be achieved in the future.”

In an interview with CHN this month, Birol called for a phase-out of inefficient fossil fuel consumption subsidies that give citizens cheap petrol or cooking gas, for example. Such subsidies create “a major distortion in the market” and “an artificial challenge for the clean energy transition,” Birol said.

But he avoided questions about subsidies supporting the production of coal, oil and gas, such as the public finance poured into the Mozambique gas project by seven other countries.

Nor would he comment on whether a managed decline of oil and gas production was needed to meet international climate goals.

Claudia Strambo, a research fellow at the Stockholm Environment Institute, said ignoring the supply side of the equation was “extremely problematic”.

The lack of attention to fossil fuel production subsidies misrepresents the relative costs of coal, oil and gas compared with other energy sources, making them appear more competitive than they really are, she said.

By failing to provide policy guidance for a managed transition away from fossil fuels, Strambo said the IEA was doing “a disservice” to producers. “History shows that failing to manage this process can have severe long-term economic, social and political implications.”

Business leaders, scientists and investors have urged the IEA to make a 1.5C-compatible scenario central to its flagship annual publication, the World Energy Outlook, opening up a debate over the IEA’s role in setting norms around global energy use.

In response, the IEA last November extended its Sustainable Development Scenario, which sets out what would need to happen for the world to limit global temperature rise to “well below 2C”, to reach the 1.5C goal.

However, it relied on using unproven negative emissions technology towards the end of the century, rather than accelerating a shift away from burning coal, oil and gas.

Sue Reid, principal advisor on finance at Mission 2020, which convened the campaign, said companies and investors lacked the data they need to align their business plans and investment portfolios with international commitments.

In its 2019 annual report, Italian oil company Eni said it had not tested its investment plan for compatibility with 1.5C because the tools to do so were not yet available.

Reid suggested investors and businesses could seek alternative sources of analysis on 1.5C if the IEA failed to meet demand.

“The more time elapses with the IEA not developing a 1.5C scenario, the more time it gives for other models to emerge that could supersede the IEA’s tools,” Reid told CHN. “It risks losing its influence if it doesn’t catch up with the world’s direction of travel towards 1.5C.”

If the IEA is serious about wanting to accelerate the clean energy transition, McKinnon said it will have to develop a central 1.5C scenario and address fossil fuel production. Its approach to the issue in its next major report in November “could make or break the legitimacy of its climate rhetoric,” she said.