Who’s who in the world of climate change diplomacy? 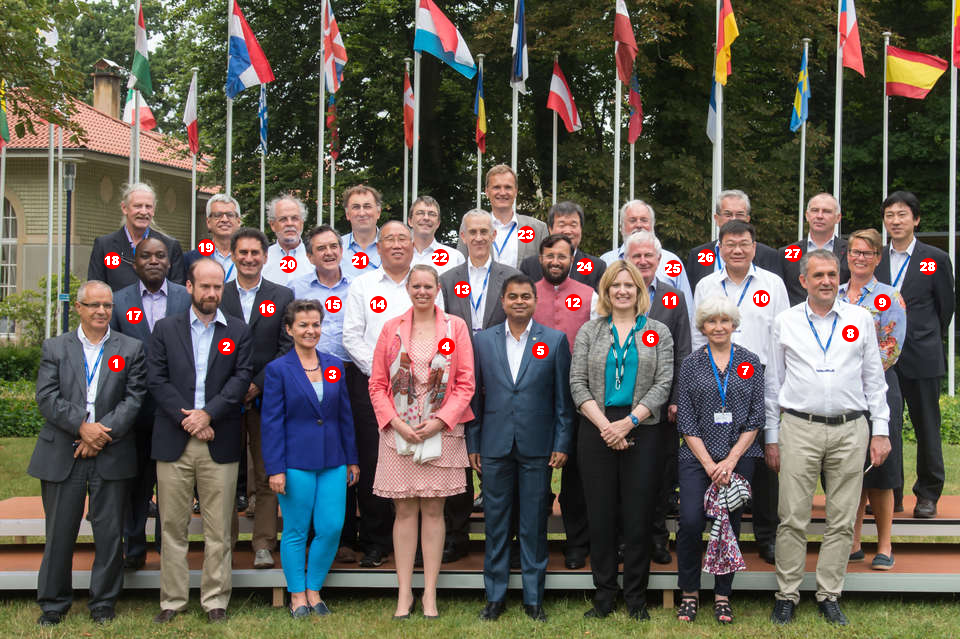 Thousands of officials will descend on Paris in December for the COP21 climate summit, where a global deal to limit greenhouse gas emissions is due to be signed off.

The UN’s climate body works by consensus, so all 196 parties officially have a say in any decision. Yet the tone and momentum of these negotiations is often set by smaller bodies.

One of these is the Major Economies Forum, a US-led initiative involving the world’s top 17 economies.

The MEF offers a space for leading envoys and UN officials to formulate ideas and work out solutions that can be applied to the talks.

Its members are influential, and the men and women above will all play a part in developing an agreement that can be acceptable and applicable to all this year.

1 – Veteran Algerian diplomat Ahmed Djoghlaf is one of the two co-chairs overseeing talks on a global climate deal. The other is State department official Dan Reifsnyder. Djoghlaf is a seasoned UN hand, having been assistant executive director at the UN Environment Programme, and then chief of the Convention on Biological Diversity. The co-chairs play a critical role which at times resembles herding cats. They are there to facilitate talks, release their own versions of negotiating texts and act as punch-bags when negotiations flare up.

3 – Costa Rican Christiana Figueres has been executive secretary of the UN’s climate body since 2010, after a stint as San Jose’s envoy to the process. As a UN official she walks a delicate line, gently prodding countries to show more ambition while whipping up support for a deal among business and civil society communities. Recently she has taken a bold line with the oil and gas majors, offering to work with them on a global pact and asking green groups to stop demonising companies who could offer solutions to the climate challenge.

4 – Ever heard of Luxembourg environment minister Carole Dieschbourg? If you’re a keen follower of UN climate talks expect to see a lot more of her, now Luxembourg has taken over the presidency of the EU. This means she will be the face of Europe up to and including Paris, and called upon to articulate the 28 member states’ policies during the summit.

5 – Ibrahim Thoriq is Maldives energy minister. The country chairs the Alliance of Small Island States (AOSIS), an influential group made up of 44 states and observers comprising of some of the world’s most climate vulnerable countries. Writing for RTCC in June Thoriq said warming of above 1.5C will condemn his country and others to rising sea waters. Still, critics are unhappy the Maldives are leading AOSIS with an autocratic government and the imprisonment of climate champion and ex- president Mohamed Nasheed in a trial Amnesty International said was a “travesty”.

6 – UK secretary of state Amber Rudd has been in this role since May, when the conservatives won a majority to take absolute power at Westminster. Close to the prime minister and chancellor, Rudd says she is firmly convinced of the need to take urgent action on climate change. Still, her department and government stands accused of radically scaling back on support for green energy and for axing flagship policies like a zero carbon homes initiative.

7 – Laurence Tubiana is France’s chief climate diplomat and a veteran of multilateral environment negotiations. The founder of Paris-based green think tank IDDRI, from 1997-2002 she advised the French PM on the environment. She won’t be chairing the talks – that job is in the hands of foreign minister Laurent Fabius – but she is seen as the brains trust behind many initiatives ahead of the COP21 talks, especially a move to encourage business and regions to take an active role in the final outcome. Follow her on twitter @LaurenceTubiana.

8 – Mehmet Birpinar is deputy undersecretary in Turkey’s environment agency. Ankara has a critical role to play in the run-up to Paris, chairing the G20 talks in mid-November, just two weeks before COP21 will start. Not that the country’s energy policy suggests it’s worried about global warming, with 14 coal plants under construction and many more in the pipeline. That won’t help its woeful record of curbing emissions. UN data says carbon pollution soared 133% from 1990-2012.

9 – Tine Sundtoft is Norway’s environment minister in the country’s conservative government. Norway is viewed as an international climate champion, a curious position given it is also a leading oil and gas producer. A major contributor to forest finance, it passed a new climate change law earlier this year, while lawmakers recently voted to divest $8 billion of coal assets in the state pension fund. Still, it plans to fully exploit its Arctic gas reserves, according to the foreign minister, leading many to question the country’s long-term strategy.

10 – Singapore’s climate envoy is Kwok Fook Seng, a seasoned diplomat. The tiny city-state is the world’s second busiest port with limited natural resources. It plans to peak emissions by 2030, according to its UN submission. Where it has real clout is on shipping emissions and bunker fuels, an area so far unregulated by the International Maritime Organisation.

11 – Tim Groser is New Zealand’s environment minister, which given its vast clean energy resources should mean he would be much-loved of green groups. Not so. Many accuse him and PM John Key government of tearing up low carbon policy, and the country’s goal for Paris was dubbed a “slap in the face” for Pacific groups. Still, it is curiously influential and a proposal for how a 2015 legally binding deal could work has gained traction among others, notably the US.

12 – India’s environment minister Prakash Javadekar represents the world’s second most populous country and seventh largest emitter at climate talks. But out of those 1.2 billion people, 300 million have no access to electricity, and despite a GDP of US$ 2 trillion, 21% of its citizens live below the poverty line. Javadekar has to talk tough for a home audience yet try and deliver a credible carbon cutting policy to wean India off coal. Otherwise 2C could be history.

13 – Todd Stern is the pencil-thin US climate envoy charged with ensuring a Paris deal will be politically acceptable to the White House while stressing the country’s commitment to an ambitious settlement. In his seven-year stint at the top of climate politics he has veered from being the Dr Evil of the talks at COP17 in Durban to the hero of the US-China accord last November. Few know the nuances of this process better or hold more cards.

14 – The poker-faced Xie Zhenhua was thought to be on his way out as China’s lead negotiator earlier this year after it was announced he had “retired”. But Xie is back, his close relationship with Todd Stern deemed a vital asset as the two superpowers chart their way towards a Paris accord. Despite their links, China will still cause problems for the US given its position as cheerleader for developing countries, which it allies with as part of the G77.

15 – Rodolfo Lacy directs Mexico’s climate strategy. While the country garners most headlines for the never-ending battle against drugs, its climate law roll-out has been low-key but impressive. Investment into wind, solar and geothermal projects is soaring, and in March it became one of the first countries to announce its climate plan for a Paris deal – 22% cuts from business as usual levels.

17 – Angola’s Giza Gaspar Martins took over the chairmanship of the 48-strong least developed countries grouping at the start of 2015. He represents some of the world’s poorest and most climate vulnerable states in Africa, Asia and small island communities. The group lacks the economic clout to force through proposals but acts as a collective conscience at the negotiations, a reminder of who will be on the frontline should warming intensify.

18 – With his ponytail and moustache, Alf Wills looks like a lost member of Status Quo. Appearances can be deceptive. The respected South African has been the country’s lead negotiator since 2002. Post-apartheid he spent two years transforming and restructuring environmental governance. A member of the influential BASIC group, along with India, China and Brazil, South Africa also has an important role as a spokesperson for sub-Saharan Africa and is struggling to ditch an addiction to cheap domestic coal.

19 – Ambassador Antonio Garcia is Peru’s special envoy on climate. Peru hosted the 2014 UN climate summit, so is deeply engaged in talks ahead of Paris. That meeting highlighted the government’s vocal commitment to cutting carbon, but also the deep challenges a country wedded to mining faces in curbing deforestation and protecting indigenous communities.

20 – Michael Zammit Cutajar set up the UN’s climate body in 1991 and ran it until 2002. The Maltese diplomat (and avid Chelsea fan) subsequently advised his own country on climate matters until 2011, and chaired a set of UN talks focused on long term cooperative action at the ill-fated Copenhagen summit in 2009. Widely recognised for his deep knowledge and expertise on climate diplomacy, he facilitated the recent round of MEF talks and is advising the French think tank IDDRI.

21 – Janoz Paztor is UN secretary general Ban Ki-moon’s personal envoy ahead of the Paris summit, keeping a close eye on talks for the New York based supreme UN being. Previously the Hungarian was head of science and policy at WWF. In a recent interview with the Carbon Brief he said climate change was the subject Ban spends the most time worrying about.

22 – Swiss environment ambassador Franz Perrez is the key figure in one of the more unusual country groupings at UN talks – the Environmental Integrity Group, which also includes Mexico and South Korea. As such he is a useful barometer at global talks, frequently making passionate interventions at negotiations often calling for greater urgency and ambition.

23 – Karsten Sach is deputy director general at the German environment ministry and the country’s top negotiator. Given the subservient role of nation states to the greater EU at these talks he rarely speaks publicly, but he represents a country whose support for a UN deal will be critical. Chancellor Angela Merkel has rediscovered some of her green zeal, as well as doubling the country’s climate finance commitments – but questions are being asked about its ongoing reliance on coal.

24 – Jai-chul Choi, South Korea’s ambassador for climate change, represents a country eager to show its green credentials but cognisant of its economic reliance on heavy industry. A member of the Environmental Integrity Group, Korea opened a carbon market at the start of 2015 and submitted its UN climate pledge well ahead of schedule, but the political will to make tougher decisions remains unclear.

25 – Not Father Christmas, but former Spanish environment chief Miguel Arias Canete, who’s now European Climate Commissioner. He’s the face of the 28 member states and the man who – along with chief negotiator Elina Bardram – will have to argue the bloc’s case in Paris. Many opposed his appointment, citing old links to the oil industry, but the affable Canete has proved himself a capable and perhaps less combustible successor to Connie Hedegaard.

26 – Strident defender of the rights of Pacific states, Marshall Islands foreign minister Tony de Brum sees Paris as a “battle for survival”. While the Marshalls don’t chair the Alliance of small island states (AOSIS) they are by some margin its loudest and most proactive member. They have pushed for a limit to shipping emissions at the UN maritime body, urged countries to back a temperature limit of 1.5C and secured the 2014 Majuro Declaration on Climate Change.

27 – Aslak Brun is Norway’s chief climate negotiator, and one of the few who tweets. Follow him @BrunAslak

28 – Japan’s ambassador on global issues is Atsuyuki Oike, a man who faces a tough task explaining how Tokyo’s recent UN climate pledge can be seen as ambitious. New analysis suggests the 26% cuts on 2013 levels by 2030 will open the door for more coal.