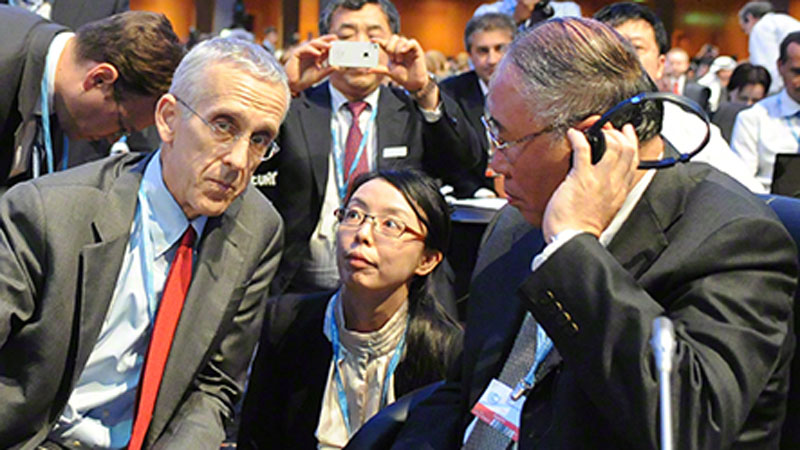 A late meeting between the lead US and China envoys saved the Lima climate talks from collapse, and underlined the value of the two countries warmer relationship in this arena.

With negotiations already running a day over, the toxic issue of which countries should accept the greatest burden for greenhouse gas cuts threatened to derail the whole process.

The G77 bloc of 133 countries classed as “developing” said it wanted those classed as rich in 1992 to adopt carbon cutting commitments before its members did.

That view was deemed unacceptable by the US, EU and others rated as “developed” over 20 years ago, given the huge increase in emissions among emerging economies.

A solution was essential. Without progress in Lima plans for a 2015 UN deal to address global warming, set to be signed off in Paris, would be in ruins.

As the prospect of paralysis in Peru mounted, lead US climate negotiator Todd Stern met his Chinese counterpart on the Saturday afternoon Xie Zhenhua to thrash out a deal.

Their solution was simple. They took a line from the recent US-China climate pact and inserted it into the UN document.

A 2015 deal would reflect the principle of common but differentiated responsibilities and respective capabilities, so important to poorer nations.

Instead of relying on the old “annex 1” list of rich countries, contributions would be “in light of different national circumstances.”

Six simple words. But, said Stern, a significant leap for the UN process.

“Mr Xie and I were able to offer that language up in effect, and it found its way into the text as a way of getting through that difficulty so that was quite useful,” he told reporters at a 0300 press conference.

He added: “I think the way we were able to deal with that issue in the US-China joint announcement a few weeks ago actually ended up becoming quite significant here.”

It was a surprise as many assumed that after a tempestuous final two days the relationship between the world’s two superpowers at climate talks was close to cracking.

China had resolutely stuck with developing countries and the G77 in demanding more from Western nations and pushing back against requests for tougher climate action plans.

Beijing officials had also criticised US climate ambition, suggesting that Washington’s target of 26-28% cuts by 2025 could be higher.

Todd Stern on China’s public criticism of US 2025 target – “I don’t know who said it” & maybe will ask Xie Zhenhua about it. #COP20

But Stern and Xie, who visited each other’s homes in the lead-up to their joint climate announcement in November, appear to have a resilient relationship.

Asked if he felt this would put the issue to bed, Stern smiled and said: “I don’t think so.” But he argued that a 2015 deal based on the 1992 framing of development was “indefensible”.

In a brief statement once the Lima Climate Action Plan had been agreed, Xie said a “good foundation” had been laid for Paris. It offered, he said, “ambition, flexibility and confidence”.

In her 0330 press conference on Sunday, she argued that there were now three parts of this tricky concept.

“One is historical, next the respective capacity which is a growing process because all countries are increasing capacity and third is national circumstances,” she said.

“It’s very clear that from now on when you speak about the responsibility and capacity of countries to address climate change that there will be three points that need to be brought together.”

Others appeared less convinced that much had changed.

A smiling Indian environment minister Prakash Javadekar told reporters he “had what he wanted” with a line referencing differentiation.

“We have made some accommodation for the success of Lima. I hope that developed countries would reciprocate it in Paris.”

India is reportedly working on plans for a carbon emissions peaking year, rumoured to be in the 2030s, but these are unlikely to be presented to the UN until June 2015.

Stern told reporters it was unlikely this would deliver as impactful a conclusion as the China deal, which was several months in the making.

“I am expecting a useful meeting but we don’t have anything in the works of the kind that we were involved with in China,” he said.