Chairing the world’s future: Two men with the climate in their hands

The UN has chosen veteran Algerian and US diplomats to steer global climate talks this year – but are they up to the job? 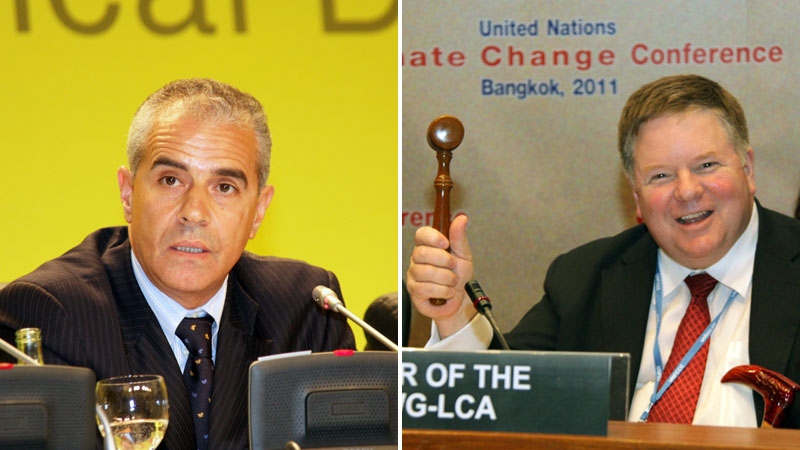 When UN climate talks resume in Geneva this coming Sunday, intense scrutiny will be directed towards two men, Daniel Reifsnyder and Ahmed Djoghlaf.

The pair – both in their 60s – will chair negotiations on a proposed global greenhouse gas cutting deal, due to be rubber-stamped in Paris this December.

A veteran US state department official, Reifsnyder has been closely involved in climate talks for the past two decades.

Djoghlaf, an Algerian, enjoyed a stellar career at the UN, first as assistant executive director at the UN Environment Programme, and latterly as chief of the Convention on Biological Diversity.

Between them they are tasked with corralling envoys from 195 countries into a semblance of order, and crafting an agreement for world leaders to sign in less than 10 months.

For a process wracked by geopolitical rows and where meetings (and decisions) regularly run days over schedule, it’s an onerous task.

Failure to make progress in Switzerland next week will increase the pressure on a process already lumbering under a heavy weight of political and scientific demands.

Scientists say emissions need to be radically cut if the world is to avoid dangerous levels of global warming, possibly resulting in rising sea levels, floods, droughts and crop failures.

Many political leaders just want some kind of deal, with some suggesting they could walk away from a UN-led talks if Paris fails.

Publically, the job of the genial Reifsnyder and the more stern Djoghlaf will be to oversee meetings and ensure order prevails as the talks heat up.

In Geneva they have six days to help countries streamline a negotiating text that some fear could rapidly expand from 39 pages to a mini bible.

At stake are proposals that threaten the economic future of some countries and mean others face a radical transition from their traditional growth models.

A key goal will be to avoid an “unworkable compilation text like Copenhagen”, says Adrian Macey, a New Zealander who chaired the Kyoto Protocol talks from 2010-2011.

To do this they’ll need to avoid discussions involving “300” people and find a way to hold more effective, smaller meetings, he says.

Maas Goote, formerly the EU’s chief climate negotiator, says they have to create an atmosphere of trust between countries, working the backroom corridors and meeting rooms.

“The more you actively approach delegates and groups – the more you are in a position to find that wording and formulation,” he says.

“The more actively you to talk to parties the easier it is to find middle ground.”

Reifsnyder and Djoghlaf will assume the hot seats vacated by Germany’s Artur Runge-Metzger, and Trinidad and Tobago diplomat Kishan Kumarsingh, who chaired from 2013 to the end of 2014.

Runge-Metzger and Kumarsingh drew stiff criticism from some observers for what they said was the pair’s refusal to allow open and line-by-line negotiations.

For many veterans of the talks, this was a prudent step, ensuring discussion did not get bogged down in debates over a few words, when more existential issues needed to be resolved.

But for some developing countries it gave the impression that they were being excluded from the process, says Mohamed Adow, Christian Aid’s climate advisor.

“The last set of co-chairs were reluctant to engage parties in direct talks from the start – so disagreements between countries were never roughed out and could not be negotiated directly.”

The new pair need to adopt a “more transparent and democratic” process, says Asad Rehman, climate spokesperson for Friends of the Earth International.

“It prevents the fear that the cooking is being done in the kitchen behind the scenes – trust is critical,” he adds.

As always in these talks – it comes back to trust. Developed and developing nations eye each other warily in this venue.

Rich nations say all countries must take part in a global deal. Poorer ones say they need financial help to do so, and ask why only a trickle has been forthcoming.

The pair will find themselves lobbied by a variety of different country groupings, as well as envoys from the US, China, EU, India and Russia.

During meetings they will have to ensure they treat all national queries delicately – or face a diplomatic crisis blowing up in their faces.

Reifsnyder knows what this feels like. At the 2011 UN climate summit in Durban, he was accused by Venezuela’s Claudia Salerno of ignoring her country’s point of view while he was chairing a stream of talks focused on long term climate action.

“He completely ignored me,” Salerno told RTCC at the time. “Are there first class and second class countries? He didn’t want to let me talk and I said that was quite rude.”

Caracas’ climate envoy has previous on this score.

In 2009 at the end of the Copenhagen climate summit she raised a bleeding hand in protest at the refusal of Denmark’s prime minister – chairing the meeting – to allow countries to register their concerns over progress of the meeting.

“It just was the fact that 24 countries could talk, that they could impose on the rest of the world what they had negotiated behind closed doors,” she told ClimateWire in 2010.

It illustrates the fine line chairs have to tread. They need to push these tortuous discussions towards a conclusion but in a way that takes most nations with them.

As chairs they will need to demonstrate a level of neutrality – a challenge no matter how high their integrity – given both have such a long history of negotiating hard for their respective countries.

In this sense having two chairs from opposite ends of the negotiations could help, says Macey.

The US and Algeria have typically sat in groups diametrically opposed to each other at UN talks. He believes this extreme level of balance could work in the chair’s favour.

“Everybody knows that no chair… selected or elected is always 100% neutral,” adds Goote. “We are all civil servants and we have an agenda. You build a reputation by being a bridge builder.”

Goote says Reifsnyder has the insight and authority to succeed in his role, calling him an “ace”.

Rehman credits Djoghlaf with ensuring talks at UN biodiversity summits while he was chief were open and transparent – offering poorer countries a chance to propose solutions.

And unsurprisingly, UN climate chief Christiana Figueres has given the pair her backing, labelling them “experienced” and “eager to work in coordination with each other and in support of governments.”

In a note sent to all envoys on January 29, Reifsnyder and Djoghlaf said they plan to adopt a policy of “openness, transparency, inclusiveness and fairness.”

Their tenure would be marked by a “no surprises” policy they added.

Antonio GM La Vina, dean at the Aterneo school of government in Manila and a member of the Philippine delegation heading to Geneva, hopes this will result with the start of formal discussions on the shape of a Paris pact.

“I would really like the chairs to give the countries a chance to negotiate, and do it from day one. If you do it by day one by day five you’ll get through half the document,” he tells RTCC.

“I don’t think you’ll reach a stage anymore where you’re able to negotiate every single word or phrase. If you allow countries to talk to each other and make proposals you’ll end up with a document that is 60-70% negotiated.

“At the end we still have to make tough decisions – but by the time we get there 80% will be settled and everyone will feel they own the 80%.”

At the same time – the onus is also on national envoys to start playing ball and stop reading monologues from pre-rehearsed scripts, says Christian Aid’s Adow.

“What you want is to facilitate negotiations in a way that parties can engage each other and put forward own views and ideas… it’s not enough to just make a statement,” he says.

Rehman, who backs calls for open negotiations, agrees. “You don’t take away the difficult issues by bring the negotiations to one minute to twelve,” he says.

But Goote, who has 14 years of experience at multilateral talks, warns against placing too much focus or pressure on the chairs or on the process.

Countries who want to slow the UN talks ahead of Paris have ample opportunities to chuck a spanner in the works no matter who’s in charge or how the discussions are managed.

“It’s easy to be an agent of obstruction, and there is no chair in the world that can solve that,” he says.