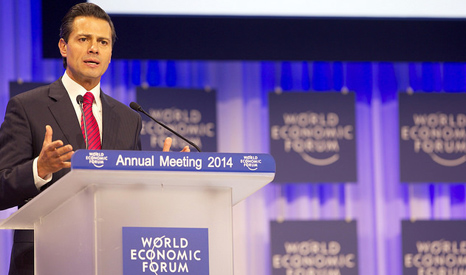 Mexico is set to break clean energy investment records in 2014, according to analysts from Bloomberg New Energy Finance (BNEF).

In a sign of confidence in the Pena Nieto government’s plans to back renewables, investment hit US$1.3 billion in the first half of the year, compared to $1.6bn in the whole of 2013.

The picture across Central America is mixed, with renewables investments in Guatemala, El Salvador, Honduras, Nicaragua, Costa Rica and Panama slightly down on 2013 at $317 million.

“However, the drivers of wind, solar and geothermal investment are even stronger in those countries than in Mexico, and this year’s political changes have mostly been positive for renewables,” said BNEF in press release.

The wind and solar sectors are set for further increases, said BNEF, with Central America primed to install 1GW of wind capacity in 2014, with another 1.3GW annually until 2016.

Earlier this week Mexico’s parliament passed new energy reforms. These aimed to break the monopoly of state-owned company Pemex on the oil exploration sector and open up the electricity market to small generators.

The country, which is the world’s 9th largest oil producer, already has some of the world’s most ambitious climate change laws. These are set to curb greenhouse gas emissions, which are currently growing at a rate of 1.5% a year.

Monica Araya from the Latin American environmental thinktank Nivela called on regional governments to respond to the latest data, and make it easier for clean energy entrepreneurs and their technologies to flourish.

“It is exciting to see a new openness to renewable energy generation,” she told RTCC.

“Now our regulators and financial experts need to support – not derail – this emerging clean-energy cluster by at the very least remove key barriers to progress.”

In May the government also signed off a target to boost renewables 33% by 2018, a move Fernando Olea, head of the UK-based Carbon Trust’s operations in Mexico said left him “stunned”.

Yayoi Sekine, Latin America analyst at BNEF, said the high costs of oil in the region were one reason why governments are so keen to explore other options.

“Using these to meet much of the additional electricity demand in coming years, and replacing that costly oil and diesel power makes sense. It is becoming a key plank in the region’s energy policies.”

Her colleague Michel Di Capua, head of Americas analysis, praised the region’s new approach to wind, geothermal  and solar, but warned against reading too much into the current figures.

“Renewables are not having everything their own way in these countries. Mexico continues to see strong investment in gas-fired generation, taking advantage of both its domestic resources and its proximity to US shale plays,” he said.

“Hydro-electric has run into some difficulties in Costa Rica and Panama, because of drought. And across the Central American region, financing for renewables does not come easily, making the role of development banks and export-import banks vital for projects to get off the ground.”