Mexico, Switzerland and South Korea form a small but influential group that could be critical in building a Paris deal 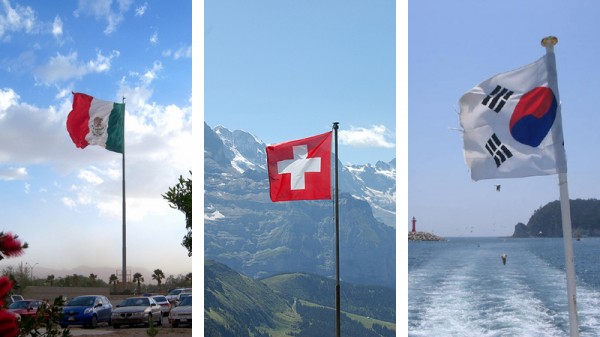 International climate talks are typically presented as a struggle between the developed and developing worlds.

The reality is more complex, but there is an undeniable tension between those rich countries responsible for the bulk of historic emissions and the emerging economies that have an increasing impact on the climate.

Much has been made of last year’s US-China pact straddling that historic divide and its significance in unblocking agreement at the last round of climate talks in Lima. Less is said about a small negotiating bloc that has been steadily influential in bridging the same gap since 2000.

The environmental integrity group (EIG) is made up of Mexico, Switzerland and South Korea, plus the European principalities of Liechtenstein and Monaco. Negotiators for these unlikely allies tell RTCC the partnership, borne out of frustration with the process, can be a strong advocate for progressive climate policies.

Spanning three continents and three time zones, as well as the firewall between developed and emerging economies, the group has a reach like no other.

As the European Union seeks to position itself as the bridge-builder in UN climate talks ahead of this December’s critical summit in Paris, this small but significant group could give them a run for their money.

The group was conceived during negotiations for the Kyoto Protocol, when countries not part of any bloc were shut out of certain conversations.

Franz Perrez, environmental ambassador for Switzerland, explains: “There was a moment when negotiations moved to a smaller setting, where only some groups were permitted to engage and we were not part of that.”

His predecessor was escorted out of the room, while representatives of formal groups stayed – an “unacceptable” situation to Switzerland.

Famously for its neutrality, Switzerland never joined the European Union that surrounds it on all sides. Nor did it agree, at the time, with the Umbrella Group, which covered most other developed countries including the US, Australia and Japan.

“These groups did not feel like home,” says Perrez.

So Switzerland declared its intention to form a new group and invited other unaffiliated countries to join.

For Mexico and South Korea, the issue was that their economies had outgrown the G77, which represented the developing world.

Now firmly in the upper-middle income category, Mexico was accepted into the OECD in 1994 and South Korea followed two years later.

When it came to climate talks, Roberto Dondisch, director general of global issues in Mexico’s foreign office, says: “We were being left out of the process.

“Although Mexico carries weight, it is not the same as having an official group.”

The dynamics of UN climate talks have changed since the EIG formed in 2000. The importance attached to formal blocs has waned and several unofficial alliances claim a similar status.

For example in 2012 six Latin American countries including Peru, Costa Rica and Panama formed AILAC, which might seem a more obvious home for Mexico.

But while Mexico consults with AILAC, its primary allegiance remains with the EIG.

The EIG is valuable as a “microcosm” of the talks, says Dondisch. “If we can get together and agree on something internally, often we can get to deals that are acceptable for almost everyone.

“That was certainly the case [at the last round of UN talks] in Lima, where some of the language that you see in the final document came out of the EIG.”

Jai-chul Choi, South Korea’s ambassador for climate change, echoes that view. It is “a group of diversity” he says, that can help to find common ground between blocs with different interests.

“When we have internal consultation among the EIG, the negotiation is very tough,” he says.

“Korea plays a sort of mediating role between Switzerland and Mexico and finally we reach a common text.”

For example in Lima, Choi says the group helped forge a last-minute compromise on “loss and damage”. This was the contentious issue that dominated the previous year’s talks in Warsaw, of compensation to countries experiencing climate impacts they cannot adapt to.

Switzerland, in common with most of the developed world, was resistant to its inclusion in the Lima deal, while Mexico was strongly in favour.

The formula they came up with, which acknowledged the Warsaw decision without adding to it, was enough to keep the show on the road.

What keeps the group together, despite its members’ different interests, is a determination to play a constructive role in the talks.

“On certain areas, we have very similar positions,” says Perrez. “The name ‘environmental integrity group’ has become a guiding principle.”

In line with the European Union, Switzerland is targeting a 20% cut in emissions from 1990 levels by 2020.

Mexico has been among the most vocal champions of green growth and last year became the first Latin American country to introduce a carbon tax.

Dondisch says: “We don’t see green development as a hurdle, we see it as an area of opportunity.”

“At the moment, Korean society is very dependent on fossil fuels. By launching the carbon market, every Korean industry is making some complaint but we want to give them a signal on a long term basis.

“As a country, in particular without any energy sources, we have to move towards a low carbon economy.”

In Paris, the group is seeking a legally binding deal with “broad participation”.

That means refusing to perpetuate a hard division between rich and poor. Or to be more precise, a division between the “annex 1” countries expected to cut emissions under the Kyoto Protocol and the rest.

Annex 1 is a list of countries who were in the OECD back in 1991 plus former Soviet states. The EIG agrees with the US that a more nuanced view of countries’ climate obligations is in order.

“Differentiation has to reflect the realities,” says Perrez. That means emerging economies, with their increasingly substantial emissions, shouldering some of the responsibility. (For Liechtenstein and Monaco, with a combined population of 75,000, it also means cutting small countries some slack.)

The EIG, with its members including non-annex 1 countries, can make that argument with more credibility than a purely developed bloc.

China, despite committing to limit its own emissions, has been curiously reluctant to require other emerging economies to do the same. In Lima, it continued to back the “like-minded developing countries,” which opposed changes to the way differentiation was framed.

“The outcome of a Paris conference should be balanced in terms of development need and environmental integrity,” says Choi.

“The EIG is in the best position to facilitate the negotiations due to its membership.”

South Korea is upping its engagement with China and Singapore, he adds.

The group still has its internal differences, particularly on issues like cash support for poor countries to cut emissions and adapt to climate change.

They agree on broadening the donor base, with all members contributing to the UN-backed Green Climate Fund.

But Switzerland was branded “fossil of the day” by NGOs in Lima for its opposition to legally binding commitments on climate finance.

“It was important we didn’t have expectations that would never be fulfilled,” says Perrez in Switzerland’s defence.

It is not the biggest or most economically mighty group, but its unique geographic and economic mix mean it can punch above its weight.

“None of us have the impression the world cannot move without us,” says Perrez. “We have to listen to others outside our group in order to have an impact.”