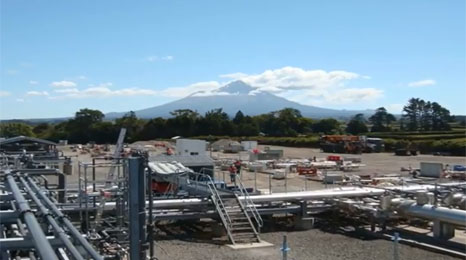 Mount Doom from Lord of the Rings with a gas plant nestling under its gaze (Pic: NZ Prime Minister)

Written by the Prime Minister’s chief science advisor Sir Peter Gluckman, it stresses the importance of efforts to cut greenhouse gas emissions, and also of preparing for changes in the world’s climate.

“Marginal benefits [to New Zealand] are likely to be small compared to the adverse effects associated with climate change on society as a whole,” Gluckman warns in his conclusion.

So far the official response to the report appears to have been a resounding and perhaps revealing silence.

The UN climate convention’s data on developed country emissions illustrates why this could be a sore topic for proud Kiwis. Since 1990 New Zealand’s emissions have risen by 88.06%, second only to Turkey.

Few observers were surprised when the government declined to take part in an extension to the Kyoto Protocol at the 2012 UN climate talks.

Despite generating 77% of its electricity from renewable sources, Prime Minister John Key’s priorities lie elsewhere, as a video named ‘Exploring our resource potential’ on his website makes clear.

Panoramic shots of New Zealand’s mountains – familiar to fans of Lord of the Rings – are mixed with pictures of gas plants, pipelines, oil rigs and Key in a glowing hi-viz jacket.

“If we are to increase our oil and gas exploration by 50%, we could potentially earn royalties of up to $13 billion, which is huge,” he says.

But at the same time as opening up vast parts of New Zealand’s land and territorial waters to fossil fuel exploration, not an unusual move on its own, the government is also accused of systematically ignoring climate impacts and weakening current low carbon policies.

The state of the country’s emissions trading scheme (ETS) tops the list of complaints from observers.

Despite a huge oversupply of credits, exacerbated by lax rules on the use of credits from external schemes, climate minister Tim Groser authorised the release of an extra 30 million New Zealand Units (NZUs) on July 1.

Big on the ‘level playing field concept’ where subsidies and trade tariffs are removed, the government has refused to intervene in a market which is largely a constructed entity, and does not operate along traditional lines.

As EU experience shows, carbon trading requires a level of control and regulation for it to operate effectively.

“The ETS could be tuned to deliver meaningful emissions reductions, but that has not been the focus or effect to date,” Simon Terry from the New Zealand Sustainability Council told RTCC.

“The ETS has reduced gross emissions by less than 1% during its first five years to the end of 2012, and these are officially projected to keep rising out to at least 2050.

“The original plan to progressively tighten the regime was indefinitely shelved last year when the scheme was effectively put into a coma.”

With an energy sector dominated by renewables, a major problem is that agriculture, the source of 40% of NZ emissions, is not accounted for in the ETS.

It was due to join in 2012, but the country’s fast expanding dairy farming industry – which produces vast levels of methane – would have been hit hard by the proposals.

Fierce opposition from the powerful farmer’s lobby, who parked their tractors outside parliament in protest, ended any chance of what they labelled a ‘fart tax’.

The plan was dropped, as were proposals to boost the carbon price either through tightening the use of foreign credits or by imposing a price floor.

“Amendments have weakened the ETS to the point where it is not only ineffective but you could be regarded as a package to encourage perverse incentives,” Green Party MP Kennedy Graham told RTCC. “Why is that? I think it’s the philosophical world view of John Key’s government, it’s neo-liberal orthodoxy.”

Whatever the political party in power, New Zealand has historically played a leading role at UN climate talks.

Climate minister Tom Groser argues the country is viewed as a “constructive partner at international negotiations”, citing work on mitigating agricultural emissions and progress towards a global emissions deal in 2015.

Not everyone agrees. At the 2012 Doha UN climate talks NGOs nominated New Zealand for the ‘Colossal Fossil’ award with Canada for blocking negotiations. Groser labelled the prize “ludicrous” and “futile”.

In addition to pulling out of Kyoto the country is the only developed nation not to submit a 2020 emissions reductions target to the UN, instead opting for a ‘responsibility target’ which Kennedy Graham argues is effectively pointless.

“We have specified a target – it’s 15% conditional on five conditions! It’s a Catch-22,” he says, adding: “There is no limit to our ability to engage in self-delusion.”

Patience is also running thin at the UN. One month ago, in an unusually public address, UN climate chief Christiana Figueres added her voice to the calls for the government to adopt a target

A major problem for climate campaigners is that there appears to be little public support for tougher mitigation efforts in New Zealand.

Recent opinion polls suggested 49.4% of the public are content with John Key, not a bad return for a leader in power, while the country has remained in positive if sluggish growth since March 2011.

“The real problem, as I see it, is that the implications of climate change for New Zealand have not been recognised by policy makers nor business, let alone the public,” says Adelia Hallet, editor of the Carbon News website.

“Debate has focused historically on whether anthropogenic climate change is ‘true’, and, more recently, on whether New Zealand should be a leader on emissions reductions or a fast follower.

“Little space has been given to the likely impacts of climate change on New Zealand within a generation, so the issue is seen as being remote in both time and space.”

Adrian Macey agrees, lamenting the fact that the government is not under “any significant pressure to do more” domestically or internationally.

The lack of public support for climate ambition is all the more surprising given New Zealand’s relative proximity to the Pacific Islands, while Auckland is often called the world’s largest Polynesian city.

Last week the Marshall Islands vice-president Tony de Brun described leaders in Canberra and Wellington as “big brothers”, and called on them to raise the plight of small island states at the UN and other international forums.

The populations of Kiribati and Tuvalu are likely to head to New Zealand in the event their islands become uninhabitable, although Prime Minister Key declined to give any guarantees on their fate when asked in Parliament by Kennedy Graham in 2009 and 2013.

“The [New Zealand] people have regard for Pacific Islands, but not to the extent they would second guess the government on this response,” Graham said.

Worse is set to come. If New Zealand’s emissions record since 1990 appears poor now, by the mid-2020s it could look horrific when the country’s forests start to tumble in scenes reminiscent of Lord of the Rings.

Large numbers of trees were planted in the mid-1980s and early 1990s, and are known as the ‘Wall of wood’. Under the Kyoto Protocol, countries gained credits for afforestation – and few did better than New Zealand.

Forestry was the first sector to come under the NZ ETS in 2008. Every year owners of forests planted post 1989 gained credits for carbon sequestered, which they could hold or sell.

Some forest businesses were making close to NZ$10 million a year from selling carbon, with the Norwegian Government providing much of the demand.

Analysts say this worked well for a time in stimulating planting of trees, but since the price crash credits that can be surrendered for 17 cents a tonne of C02 are being shed, and forests are being converted to dairy farming, the worst of both worlds.

By the 2020s this will accelerate, but trees are unlikely to be replenished at the same speed, because many nurseries have closed and seed production has slowed, resulting in a steady rise of forest related emissions.

A global emissions deal in two years time may be a game-changer, forcing the unwilling and the uncertain to reveal their cards.

“No government will be compelled to commit to more than it feels confident of doing or more than it considers its fair share,” reads part of New Zealand’s submission to the UN in March 2013.

Nothing in the document is especially controversial, but it makes clear the government’s desire to follow any process, rather than lead.

It’s a theme that seems to underpin the current administration’s attitude to any form of climate ambition, preferring to keep their ultimate intentions a guarded secret.

“I really don’t think most politicians in New Zealand grasp the extent of climate change – it’s just another thing to be juggled,” said one analyst, who preferred not to be named.

Not everyone is pessimistic.

Adelia Hallett believes New Zealand’s ETS could still bounce out of its slump, perhaps buoyed by Australia’s moves to launch a trading scheme and EU efforts to boost its over flagging ETS.

That could take years, and with the next round of UN talks just over three months away, and the Prime Minister committed to exploring middle earth for oil, gas and minerals, another fossil could be looming for the Kiwis.

If that happens, New Zealand could, in Kennedy Graham’s words, be reduced to “running like a skunk with Canada internationally, and seemingly unable to turn round mitigation domestically.”