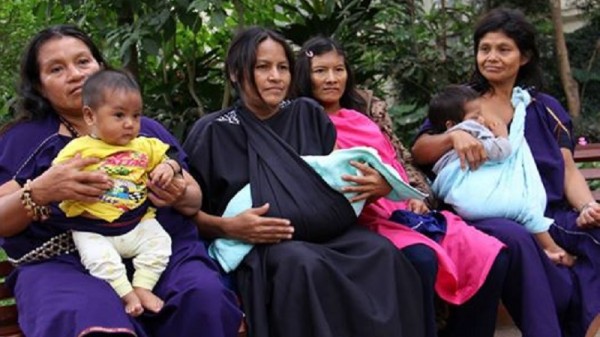 Ergilia Rengifo, Julia Pérez, Adelina Santillàn and Lita Rojas are in Lima to demand justice for their murdered husbands
(Pic: Facebook/If not us then who?)

Edwin Chota, Jorge Rios, Francisco Pinedo, and Leoncio Quinticima were travelling to visit their kinsmen in Brazil early September when they were ambushed and killed.

Leaders of the Ashéninka people of Saweto, they were known for defending the Amazon rainforest. Illegal loggers are believed to be responsible for their murders.

Deforestation is on the rise in Peru, accounting for some 40% of the country’s greenhouse gas emissions.

As Peru hosts international climate talks, the widows of these four men are in Lima to demand justice and state protection.

“Our community is aware of global concerns about climate change and agree with the need for solutions to protect the world’s forests,” says Ergilia Rengifo, widow of Rios.

But the Saweto people’s efforts to save their own lands from deforestation have not been supported by the Peruvian government, she says.

The widows want the state to recognise their title to the land their husbands died for – rights their fellow Ashéninka across the border in Brazil won in 1992.

Three months after the tragedy, all they have are promises. Back home, a 6-8 day canoe ride from regional capital Pucallpa, their people are still under threat.

Our Fight from Handcrafted Films on Vimeo.

Two of the women nurse young babies as they brief journalists at a hotel in Lima.

They are not welcome in the UN climate conference centre, an infant-free zone 45 minutes away by bus.

In that temporary village, a government official insists they are speeding up the process to give the Ashéninka their title – an US$80 million programme due to start next year.

“We are awfully sorry for what happened in Saweto,” says Gabriel Quijandria, deputy minister of strategic development.

Two suspects have been arrested and are under investigation. The widows are not satisfied; they say the murderers were part of a wider criminal network that is going unpunished.

A 2012 World Bank report estimated up to 80% of Peru’s timber exports were harvested illegally.

According to Global Witness, there have been 57 assassinations of land defenders in Peru since 2002.

A study published in Carbon Management found that across the Amazon, 20% of forest is under threat.

“We have never been under so much pressure, as this study demonstrates,” said Edwin Vásquez, co-author and president of indigenous people’s network COICA.

“Yet we now have evidence that where there are strong rights, there are standing forests.”

Quijandria says the government has initiatives to halt the rise in deforestation.

Last year 145,000 hectares of forest was destroyed, environment official Gustavo Suarez de Freitas revealed earlier in the week. The figure was 80,000 hectares in 2001.

When trees are burned or rot, they release carbon dioxide into the atmosphere, contributing to climate change.

In September, Germany and Norway announced funds to help protect Peru’s forests – and the carbon stored in them.

Welcoming the support, Peru’s president Ollanta Humala said it would go towards placing the country on a path to sustainability.

“We have a lot of work to do to protect Peruvian forests, to formalise the rights of Peruvian indigenous peoples,” he said.

For Rengifo’s husband this will come too late, but she hopes that her story will inspire delegates at the Lima climate conference to take forest protection initiatives more seriously.

“We ask that the governments and other groups participating in COP20 listen to our demands, and realise that the people of Saweto can do much to help, but we need their support.”