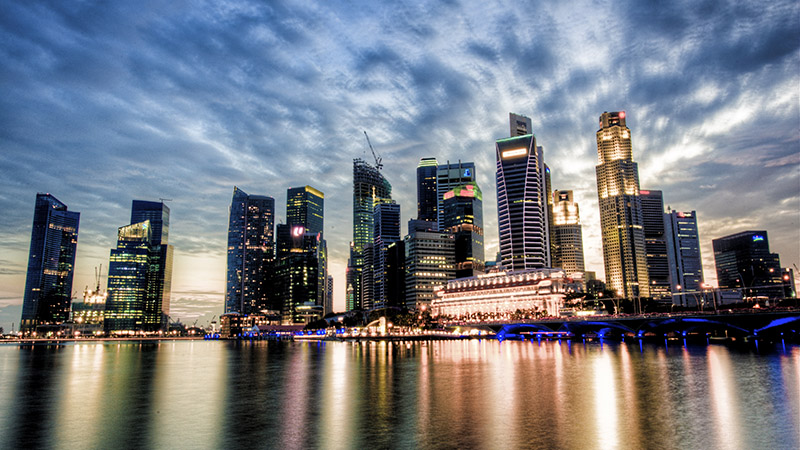 The skyline of Singapore, a wealthy city-state of 5.4 million (photo: Wikimedia Commons)

Singapore, the world’s second-busiest port by tonnage, posted its pledge to a UN climate deal on Friday anchored in energy efficiency.

The trading nation aims to peak its greenhouse gas emissions “around 2030” and cut carbon per dollar of GDP 36% from 2005 levels by the same year, it said in a UN submission.

The 716 sq km island with “no natural resources” effectively dismissed clean energy in its plan, known as an ‘intended nationally determined contribution’ (INDC) in UN jargon.

Solar too is a “challenge” – it could contribute a maximum 8% of peak electricity demand within 15 years, with limited space for photovoltaic cells.

Making its economy less dependent on the dirtiest fossil fuels is the aim. Singapore now generates over 90% of its electricity from natural gas, a cleaner substitute for coal.

But carbon emissions doubled between 1990 and 2014, and under plans have another 15 years to rise.

“I think our INDC needs to be taken in the context of our overall national circumstances,” Sin Liang Cheah, an official at the National Climate Change Secretariat told RTCC.

“If you take away renewables and the opportunity of fuel switches, what you have is our efforts going forward are very much dependent on energy efficiency,” the secretariat’s deputy director for international policy said.

A leading provider of bunker crude to vessels, Singapore did not mention emissions from international shipping, which fall outside of the UN’s climate remit. Maritime emissions are virtually unregulated and could rise as much as 250% by 2050.

Cheah highlighted the pledges were unconditional and didn’t count on financial aid from international partners. Nor did they rest on buying carbon credits.

“At this point our intention is to focus on achieving mitigation targets through pure domestic assets,” he said.

“The post-2020 rules for carbon markets are still very much uncertain. At the UNFCCC there’s no clarity who can buy or sell, and what the accounting practices are. We’re studying the potential.”

Singapore is prepared to go further if this December’s UN summit in Paris results in a legally binding climate deal, the document said. In that case, it will cut 2020 emissions 16% from business as usual instead of the existing 7-11% pledge.

Over 40 countries have now delivered plans before the December conference tasked with producing a pact to hold global warming to 2C by 2100.