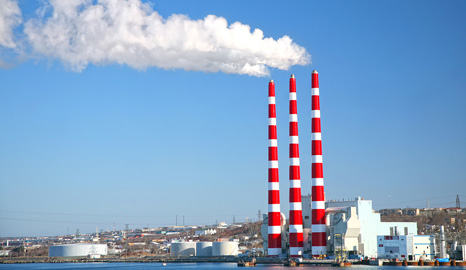 Believe it or not, the statistics indicate carbon trading is growing – nationally and internationally.

As of December 2013, 17 countries have carbon pricing mechanisms either running or planned. According to a recent study by the World Bank these cover greenhouse gas emissions of 10 GtCO2e/y, equal to 21% of the 50 GtCO2e emitted globally.

Historically the UN’s Clean Development Mechanism (CDM) and the European Union’s Emissions Trading Scheme (EU-ETS) have dominated global markets. Both have suffered from plummeting carbon prices in the past year, a result of the economic slump post 2008 and the over-supply of credits.

But both markets are likely to be eclipsed by China, which is on course to roll out its fourth of seven pilot schemes, which will see it become the world’s epicentre of carbon trading. According to the government, by 2014 it could cover 700 million tonnes of emissions, and by 2020 it could be worth US$ 3.5 trillion.

“Two or three years from now, assuming current programmes run to schedule, carbon pricing will be in place in jurisdictions that together account for a little under a quarter of total global CO2 emissions from energy and industrial processes, Adam Whitmore of Rio Tinto told RTCC. “If carbon pricing in China extends nationally coverage will increase to over 40%.”

Below we have outlined the key markets set to dominate the sector in the coming decade. 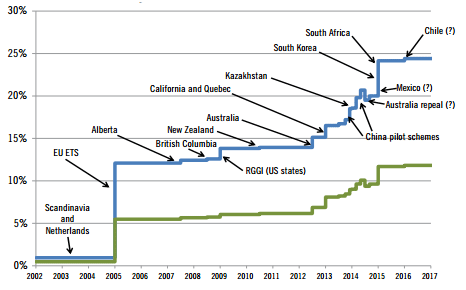 Chinese Certified Emissions Reductions (launched 2013)
China has pledged to cut its carbon intensity by 40-45% by 2020 from 2005 levels and is developing at least seven pilot emissions trading schemes. Guangdong province will launch a CO2 emissions trading scheme in mid-December, following Shanghai and Beijing’s pilots last week. The smallest of the pilot markets is in Shenzhen which, unlike other schemes that cap emissions, its scheme is efficiency-based. Three more will follow next year.

Mexican carbon credits MEXICO2 (2013)
The Mexico stock exchange’s first carbon credits trading platform, a non-binding initiative, launched in November 2013. Officials expect MEXICO2 to handle a million carbon credits in its first year of operation, doubling to two million in the second year with the aim of meeting its 30% reduction in CO2 emissions target by 2020.

Alberta carbon pricing (2007)
Home to Canada’s tar sands, Alberta emits the highest amount of greenhouse gases of any Canadian province, accounting for roughly one-third of the country’s overall emissions in 2011. It was the first North American jurisdiction to regulate greenhouse gas emissions and implement a compliance carbon pricing program. For 2007-2011, Alberta’s carbon pricing system had achieved 32.3. million tons of reductions in CO2e and channelled $167 million into low-carbon projects.

EU Emissions Trading Scheme (2005)
Europe’s ETS is the biggest carbon market in the world, covering around 45% of the region’s greenhouse gas emissions. That’s more than 11,000 power stations and industrial plants in 28 countries, as well as airlines. It works on a cap and trade principle, with the ‘cap’ progressively cut forcing countries and businesses to develop more efficient and low carbon operations. In recent years it has struggled with plummeting prices of credits, but is still regarded as the gold standard for all carbon trading schemes.

Australian Direct Action Plan (2013)
It’s unclear whether Prime Minister Tony Abbott’s new climate plan will see carbon trading disappear, or continue under a new name. Abbott is trying to repeal Australia’s ‘carbon tax’ on the country’s highest emitters, and says he’s not convinced about the science behind climate change. But Peter Castellas, chief executive officer of the Carbon Market Institute, says proposed alternatives look like an emissions-trading system. “We will use architecture that is already in place and working well,” Environment Minister Greg Hunt is reported by Bloomberg as saying at the end of October.

US Regional Greenhouse Gas Initiative (2009)
RGGI is a cooperative effort among nine Northeastern and Mid-Atlantic States to reduce carbon dioxide (CO2) emissions from the electric power sector through coordinated state cap and trade programs. Proceeds from the auctions are returned to the states and invested in energy efficiency, renewables, climate change abatement, and direct energy bill assistance. The New York State Energy Research and Development Authority (NYSERDA) calculated that emissions in the RGGI region declined 33%.

Analysis: Is RGGI proof cap and trade works in the USA?

Kazakhstan Emissions Trading Scheme (2013)
In 2012, Kazakhstan began efforts to build a domestic ETS that began its pilot phase in January 2013. This market will aid the country in achieving its goal of reducing emissions 7% below 1990 levels by 2020, and it will make Kazakhstan the first Asian nation to undertake an economy-wide cap. Beginning in 2013, the Kazakh ETS imposed allowance surrender obligations on 178 companies, and the cap for these companies is 147 MtCO2e, which is the 2010 level for these capped companies, 55% of the nation’s total GHG output, and 77% of the country’s CO2 emissions.

Californian Cap-and-Trade (2013)
It has been a year since California launched the US’ largest emissions cap-and-trade programme. By 2015, California’s program will expand to be about twice as large as RGGI. California’s economy-wide target for emissions reductions is to achieve 1990 level emissions by 2020. As the program progresses, both the portion of auctioned allowances and the scope of the cap will increase, resulting in anticipated auction proceeds of nearly USD $12 billion dollars in 2020. California will also be linking its programme with Quebec starting 1 January 2014.

Québécois Cap-and-Trade (2009)
Despite Canada rescinding its Kyoto Protocol commitment, Québec adopted a greenhouse gas target of reducing emissions 20% below 1990 levels by 2020 in November 2009 using a cap-and-trade scheme. Four auctions of allowances per year, which began this year, are expected to raise a total of CAD $2.4 billion for the Action Plan on Climate Change. Approximately 96% of electricity in the province comes from renewable energy. As a result there are minimal reduction opportunities in the electricity and manufacturing sectors. Instead levies are placed on the transport sector.

New Zealand Emissions Trading Scheme (2008)
Under the Kyoto Protocol’s first commitment period (2008-2012), New Zealand committed to reducing its annual average CO2 emissions to 1990 levels with its ETS in force by September 2008. It is the only ETS in the world that includes emissions liabilities for land-use sectors: deforestation of pre-1990 forest land (as of 2008) and biological emissions from agriculture. However, in August 2013, Climate Change Minister Tim Grosser announced that it would adopt a 5% reduction target below 1990 levels by 2020. The country’s long-term target is a 50% emissions reduction below 1990 levels by 2050.

Analysis: Why are the Kiwis in a climate change coma?

Norwegian Greenhouse Gas Emissions Trading Act (2005)
The main Norwegian emissions mitigation policy is the GGETA which became active on 1 January 2005 and is one of the few countries in which a carbon tax and an emissions trading scheme significantly overlap. By 2020, Norway aims, as its Copenhagen Accord pledge, to reduce its GHG emissions by 30% relative to 1990 levels, and by 40% if there is an international agreement. The Norwegian emissions trading scheme was designed to be compatible with the EU ETS, and many of the features of the two programmes are similar.

South Korean Emissions Trading Scheme (2015)
Since 1990, Korean emissions have doubled and now slightly exceed Australia’s 600 million metric tons, making the country the world’s seventh largest greenhouse gas emitter. In April 2011, the South Korean government released its final draft for an emissions trading system, due to begin in 2015, modelled on the EU ETS, that outlines a three-phase programme. Korea also became the first Asian country to pass a national cap-and-trade system when the National Assembly passed this bill in 2012 almost unanimously.

Swiss Reduction of CO2 Act (2008)
In 1999, Switzerland adopted the Act on the Reduction of CO2 Emissions (CO2 Act) as a supplementary environmental policy that centres on CO2 mitigation. The CO2 levy and voluntary ETS were designed to help achieve the Act’s goal of reducing emissions by 10% relative to 1990 levels by 2010. The total cap in that year was 3.42 MtCO2, covering approximately 7% of Swiss emissions. For 2013-2020, the Swiss ETS will move from a customized system to a standardised (EU-style) system, as Switzerland continues linkage negotiations with the EU.

UK Emissions Trading Scheme (2001)
The United Kingdom Emissions Trading System (UK ETS) was the first national, multi-sector emissions trading programme ever established to achieve its Kyoto Protocol commitment of 12.5% below 1990 emissions levels. 34 organizations and facilities agreed voluntarily to take part in the UK ETS, amounting to emissions reductions of 12 million tons CO2-equivalent (CO2e) between 2002 and 2006, which is 0.43% of total UK emissions over this period.

Japanese Cap-and-Trade (Planning phase)
Japan is the third biggest economy in the world, and, in 2010, its CO2 emissions placed it fifth among the world’s countries. As part of the Copenhagen Accord, Japan pledged to reduce GHG emissions 25% below 1990 levels by 2020, however, in a surprise announcement at climate talks in Poland recently, Japan said it would now aim to cut emissions 3.8% against 2005 levels by 2020. Momentum towards a mandatory, nation-wide trading scheme with absolute caps has stagnated since December 2010.

Indian Emissions Trading Scheme (Planning phase)
As of 2009, India was the world’s third largest CO2 emitter, and, through 2020, annual GDP growth is expected to be between 8% and 9%. By 2020, India is expected to contribute about 6% to global emissions. Since July 2010 there has been a nationwide carbon tax on coal for 50 rupees/ton of coal produced in and imported to India. Pilot ETS programmes are being launched in three states, Tamil Nadu, Gujarat, and Maharashtra.

Report: Mumbai and Kolkata at ‘high risk’ from climate change