RGGI: proof carbon trading can work in the USA? 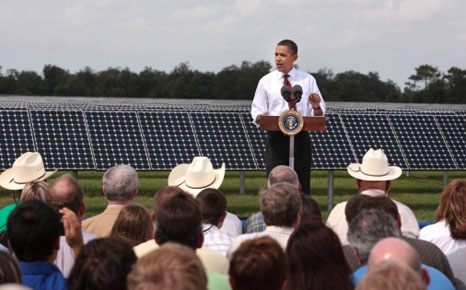 The Obama administration is reputed to be looking to implement a nation-wide RGGI scheme. (Pic: Jesse Lee)

An ambitious cap and trade scheme is celebrating its fifth birthday in nine north-eastern and mid-Atlantic US states.

Bids for the CO2 allowances ranged from $1.98 to $12.85 and 100% were sold. Cumulative proceeds from all RGGI CO2 allowance auctions currently total $1.4 billion dollars.

The nine states involved with the scheme are Maine, Vermont, New Hampshire, Massachusetts, Rhode Island, Connecticut, New York, Delaware and Maryland. Between 2010-2012 they cut emissions by more than 30% compared to 2005.

The loss of New Jersey in 2011 was a blow, but signs are that carbon trading may be about to become more popular in the country, where California is the only other State to run a similar initiative.

“Going forward, other states [will] either create their own or join our system – we’ll see how that plays out,” RGGI vice chair David Littell told RTCC.

He says the EPA’s recent decision to effectively block new coal fired power plants, and US President Barak Obama’s Climate Action Plan as proof that the tide is turning in the US in favour of cap and trade.

But he admits RGGI still has work to do. For example, its reinvestment of money from auctions has helped cut emissions more than the sale of allowances.

“Looking backwards,” said Littell, “most of the [emission] reductions that we’ve got out of the first five years are as a result of how we invested those allowance proceeds because our cap was too high after we launched.”

In 2011 independent market research company Analysis Group found that customers saved nearly $1.1 billion on electricity bills in the first three years of RGGI, although the USA’s shale gas discoveries have also been linked with falling costs.

The scheme has also been credited with creating 16,000 cleantech jobs in that time region-wide.

With these benefits in mind, Littell believes, with federal support, this programme could go viral throughout the other states.

“I think there is interest at some level in the other states but the way these things play out in the US, the EPA is going to do what it’s going to do and then each state will make a decision on how to move forward.”

But RGGI is not without its critics.

Jeffrey Margulies, partner at US-based law firm Fulbright & Jaworski told RTCC that in certain quarters any government intervention would be perceived as “command and control”.

“I think generally the business community prefers market mechanisms to reduce emissions but the political appetite for it seems to have just dried up,” said Marguillies.

RGGI has aroused significant opposition from Republicans, who view it as government intruding into its constituents’ lives and add an unnecessary cost to ratepayers.

When New Jersey’s Republican governor Chris Christie, pulled his state out of RGGI said climate change is real but he declared RGGI to be a failure that “does nothing more than tax electricity, tax our citizens, tax our businesses, with no discernible or measurable impact upon our environment.’’

Daryn Iwicki, AFP’s deputy state director said in a statement that “every” economist had warned Obama’s cap-and-trade scheme would kill jobs and damage the country’s economy.

“The RGGI tax hurt New Jersey residents and businesses while doing nothing for the environment, despite the ludicrous claims of the radical environmentalist movement,” said Iwicki.

So far, California has been the only other state in the US to mimic RGGI.

In May, the state raised more than $280 million from its auctions to invest in energy efficiency and renewable energy, sustainable communities and clean transportation, natural resource preservation and waste diversion.

Margulies said California has taken its cap and trade scheme one step further from RGGI.

“We don’t want to limit it at just the power generation – that’s kind of an inefficient way of going about regulating – because emissions are not limited to power.

“In California you have a huge percentage – I think it’s somewhere in the 40% range – that are due to vehicles. And power is actually a lower percentage of emissions in California than it is in the rest of the US.”

Between RGGI and the California programme, a quarter of US residents now live in states that control greenhouse gas emissions through market mechanisms.

Next year, RGGI will take a step forward, lowering the amount of climate-changing carbon dioxide that power plants can emit, from 165 tons to 91 tons in the region, and from 64 tons to 35 tons in New York State.

Littell said this figure will continue to drop annually by 2.5% through to 2020.

And while cuts in emissions are an undoubted achievement, perhaps RGGI’s biggest feat is proving that carbon markets can work in the USA.

“I think the general sense is that [RGGI has] been effective from the standpoint of creating a marketplace and a price for carbon,” Dan Bakal from advocacy CERES told RTCC:

“The other thing that’s been very effective about it is taking those funds and deploying them to basically improve energy efficiency or advance renewable energy.”